“No heart would remain unstained”: The Atrocities of WWII

I hate to see these atrocity stories start and grow. Our experience in the last war shows that most of them are not true, but the very talking of these stories brings more atrocities on both sides of the war.

It’s not clear which incidents Charles Lindbergh had in mind when he wrote his diary entry for April 7, 1942. That morning’s edition of the New York Times included accusations of biological warfare against Chinese civilians and a brief report of Japanese soldiers looting a church in that same country. Or Lindbergh might have been thinking of early allegations of Japanese mistreatment of prisoners of war — e.g., the fifty British POWs bayonetted at Hong Kong the prior month. (The Bataan Death March started two days after this diary entry.) The historical record testifies amply to Japanese atrocities in World War II, but it’s striking that in 1942 the most famous American in the world was prepared not only to dismiss such reports as propaganda, but to believe his countrymen capable of their own barbarism:

So it’s notable how often the tiny handwriting of Lindbergh’s wartime journal describes American atrocities that he learned about during his secret deployment to the South Pacific in 1944. Typical is this entry from June 28, when he was stationed at Hollandia:

…I am shocked at the attitude of our American troops. They have no respect for death, the courage of an enemy soldier, or many of the ordinary decencies of life…. I said, during a discussion, that regardless of what the Japs did, I did not see how we could gain anything or claim that we represented a civilized state if we killed them by torture. “Well, some of our boys do kick their teeth in, but they usually kill them first,” one of the officers said in half apology…

Lindbergh is far from alone in recording such actions and attitudes. In the most famous American account of the war in the Pacific, Eugene Sledge described vividly the “particular savagery that characterized the struggle between the [U.S.] Marines and the Japanese.” After recalling a comrade who used his kabar knife to extract gold-crowned teeth from a Japanese captive on Peleliu, Sledge concluded that the fighting “eroded the veneer of civilization and made savages of us all.”

Charles Lindbergh agreed: “The more I see of this war in the Pacific,” he told his diary in July 1944, “the less right I think we have to claim to be civilized.” Sledge and Lindbergh were unusual in this regard. As John Dower has pointed out, Americans and Japanese alike were prone to believe that “atrocities committed by one’s own side were episodic, while the enemy’s brutal acts were systematic and revealed a fundamentally perverse national character.”

While the war that Sledge witnessed was particularly brutal, in part because of the racial pride and hatred that Dower brilliantly examined in War Without Mercy, the other side of the world saw its own American atrocities.

One of the most infamous took place in July 1943. Before the Oklahoma National Guardsmen of the 180th Infantry left North Africa for Sicily, General George S. Patton extolled them to “kill devastatingly” — even if the Italians and Germans surrendered. On the morning of July 14th, near an airfield at Biscari, a sergeant suddenly emptied a submachine gun into a group of forty Axis prisoners, stopping to reload and fire single shots into those still living. Only three men escaped. A few hours later, a captain in the same regiment organized a firing squad that murdered three dozen Italian prisoners. Not quite two years later, soldiers from the same division (the 45th) killed 30-50 German guards who surrendered during the liberation of Dachau.

In sheer numerical terms, Americans committed many fewer such atrocities in World War II than did their German and Japanese adversaries (or their Soviet allies). But looking back, Lindbergh found both sides guilty. “What the Germans had done to the Jew in Europe, we were doing to the Jap in the Pacific,” he wrote in early drafts of his never-finished autobiography. To make sense of it all, Lindbergh appealed to the New Testament — the one book he had brought along on his combat tour in the South Pacific:

Now, and as far back as one could go in history, I realized, these atrocities had been going on— not only in Germany with its Buchenwalds and its camp Doras, but in the liquidations and purges of Russia, in the Pacific, in the riotings and lynchings at home, in the less publicised uprisings in Central and South America, in the cruelties of China, a few years ago in Spain, in pograms [sic] of the past, the burning of witches in New England, the tearing apart of people on the English racks, the burnings at the stake for the benefit of Christ and God. In the Crucifiction [sic] itself. “Judge not that ye be not judged” [Matt 7:1, KJV].

It’s hard not to interpret such passages as Lindbergh as trying to justify his own controversial posture towards Nazi Germany and American intervention in World War II. If “the Germans had done to the Jew” nothing more than what Americans had done to the Japanese, perhaps the stakes of the war were not so clear. Perhaps the U.S. would have been better off never dirtying itself with so unjust a war — the stance Lindbergh defended vigorously up to his death in 1974. 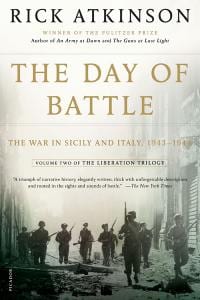 But we need not fall into moral equivalency. I think a far more insightful interpretation — one that accords well with a Christian understanding of sin — can be found about halfway through Rick Atkinson’s magisterial Liberation Trilogy. After narrating the troubling details of the Biscari massacres, Atkinson concludes that

…war was not just a campaign but also a parable. There were lessons of camaraderie and duty and inscrutable fate. There were lessons of honor and courage, of compassion and sacrifice. And then there was the saddest lesson, to be learned again and again in the coming weeks as they fought across Sicily, and in the coming months as they fought their way back toward a world at peace: that war is corrupting, that it corrodes the soul and tarnishes the spirit, that even the excellent and the superior can be defiled, and that no heart would remain unstained.

You can read more about the Biscari massacre and Atkinson’s interpretation of it in this 2015 post at The Pietist Schoolman.