In 1918 suffragette Christabel Pankhurst won the right to vote in Britain and converted to Christian faith. In 1921 she sailed across the Atlantic to seek her fortunes in America.

Settling in California, she continued to read standard dispensationalist fare. She was entranced by the notions that Christ would physically return to earth at any moment, that the Church would be raptured to safety before the Great Tribulation, that Israel would be restored to its own land in [un]belief—and afterward be converted by the appearance of Christ.

She also worked her way into end-times circles. A.C. Gaebelein, editor of the fundamentalist magazine Our Hope magazine and one of the leading figures of an evangelical network called the Advent Testimony Movement, described his first encounter with Pankhurst like this: “On one of my last visits, I think it was in 1922, a lady stepped to the front to greet me. She expressed herself enthusiastically over what she had heard. She said how very much it had helped her and opened her eyes to many things. She wanted Our Hope and later ordered my books for study. She handed me her card and it informed me the lady was Miss Christobel Pankhurst, living then in Hollywood. Since that time Miss Pankhurst has become an interesting lecturer and writer on prophetic truths.”

“Interesting” dramatically understates Pankhurst’s stunning entrance into the fundamentalist preaching circuit. If her theological material was not particularly innovative—deriving largely from John Nelson Darby’s “pre-tribulation” dispensationalism—the ways she preached that message was. Embodying a striking magnetism, says religious biographer Tim Larsen in Christabel Pankhurst: Fundamentalism and Feminism in Coalition, Pankhurst was “an effective popularizer” of the notion that “The Lord Cometh.”

To her readers and listeners, she seemed amazingly relevant. She read the newspaper alongside the Bible, constantly on the lookout for developments in geo-politics and war, natural disasters, developments in Palestine, and anything that was reminiscent of the Roman Empire. She later recalled, “I kept silent until I saw that the signs of the times were fulfilling the Scripture promises. For eight years now this thing has been my constant study. I read the world’s newspapers, I read the new books, and I tear the heart out of them in my search for the ever-multiplying  proofs of the truth of the prophetic utterances in the Bible.” She integrated contemporary realities and end-times prophesies in a best-selling book The World’s Unrest and in many other books and articles.

Far-flung fundamentalist venues were attracted to her facility in eschatology. Over the 1920s and 1930s, she preached and wrote for Moody Bible Institute, the Bible Institute of Los Angeles (Biola), Charles Trumbull’s Sunday School Times, Winona Lake Bible Conference, John Roach Straton’s congregation in New York City. In the 1950s she became a frequent guest on television shows.

In all these settings, Christabel Pankhurst violated contemporary sensibilities that pit feminism and fundamentalist against each other. At women’s clubs across the nation, she described her suffrage efforts in Britain and her beliefs on biblical prophecy—all in the same speeches. As historian Matt Sutton puts it in American Apocalypse, Pankhurst nurtured a reputation for being an odd combination of “former suffragist revolutionary, evangelical Christian and almost stereotypically proper ‘English Lady.’”

Intriguingly, then, Pankhurst never rejected feminism as she embraced fundamentalism. She wrote her defense of the suffrage movement in a book entitled Unshackled: The Story of How We Won the Vote. She maintained her old friendships and networks from the Women’s Social and Political Union. The executor of her will was the suffragette Grace Roe. She often explicitly reaffirmed her commitment to gender equality in front of fundamentalist audiences.

She also reinforced one with the other. In Seeing the Future, Pankhurst compared feminism and Zionism. She wrote, “Modern Zionism has followed a like course. One well remembers the day when, from women themselves, the idea of voting, because unfamiliar, met with indifference, and even, where some were concerned, resistance. They were accustomed to being voteless: why not, thought many of them, leave things alone, especially as success was in their view doubtful, and even if realized might mean the loss of some existing privilege. Exactly the same indifference, and even greater resistance, have many Jews shown toward Zionism. Exactly in the same way will their indifference and resistance be overcome. A conquering idea is the return to Zion.”

How do we make sense of this feminist fundamentalism? According to Larsen, fundamentalists were more flexible than we often assume. Indeed, many luminaries of the nineteenth and early twentieth centuries made space for women’s voices. This was true especially in the first generation of fundamentalists, who often affirmed women in ministry, says Janette Hassey. Examples included Frances Willard, Dwight Moody, William Jennings Bryan, John Roach Straton (the so-called “Pope of fundamentalism”), and Billy Sunday. Even the Moody Bible Institute Monthly identified her as “the great apostle of women suffrage.”

But Pankhurst seems to have outlived this flexible world. After she died in 1958 a Los Angeles Times obituary described the preacher’s “valiant” struggle for the vote and her humanitarian efforts. It also described her devotion in retirement to “the study of drawing, painting, and music.” Somehow it managed to completely pass over the religious exploits that had consumed most of her life. 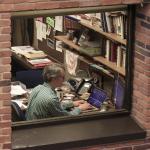