A golden rule when reading the New York Times is never to be shocked by idiocy. That is what they are, and what they do. But I do confess to breaking my own rule in reading a recent Eastertide article about depictions of Jesus, by one Eric Copage. I am by no means the only person to point this out, but how the article got through the editorial process defies belief. Yes, I’m shocked.

The vast majority of Mr. Copage’s piece was unobjectionable, if not laudable, and actually reflects my own views closely. He rejects the historical tendency to depict Jesus as a white skinned blue eyed North European – what I have myself termed Surfer Dude Jesus – and instead praises visions of Christ in different ethnic guise – African, Asian, whatever. To which I say, amen and amen. He has said it better than I could. And there, in the middle of Copage’s sanity and wisdom was this cluster bomb of a sentence: “But Jesus, born in Bethlehem, was most likely a Palestinian man with dark skin.” Not argued, not justified, just left there.

Copage is saying that Jesus was a Palestinian, a term that if it has any meaning whatever, refers to ethnically Arab (and non-Jewish) residents of that land. What Copage is saying that Jesus belonged to this oppressed minority, that as a historical figure he should not be seen as “white,” and should therefore be classified together with the wretched of the earth. The hate peddler Ilhan Omar recently retweeted a similar claim about Jesus being a Palestinian, a doctrine likewise proclaimed by Rev. Jeremiah Wright, pastor to Barack Obama.

The means by which Mr. Copage reached his conclusion do not, shall we say, cast a bright light on his cultural awareness or sense of history. I have struggled with this, but this is the only conclusion I can reach. He knows that in the present day, Bethlehem is traditionally a heart of Arab Palestine. And therefore, he deduces, it must have been like that back in the first century AD. What could be more obvious? Presumably then too, it was under Israeli occupation….

So here we have a problem. If you protest that statement about Jesus as Palestinian, you presumably get denounced for being anti-Palestinian, or in support of white supremacy. So, you bigot, what have you got against the statement that Jesus had dark skin? Not, in fact, that Palestinian Arabs are terribly dark-skinned, and certainly not more than Jews or indeed Italians, but let that pass.

The same objections also arise if you declare a larger truth, namely that history matters. But it does. Jesus was a historic person who was a Jew. This is not an debatable proposition. Jesus was a Jew, and nothing about him, or his life, or his world, or his teachings, makes sense except in that context. As a Welsh person, I would be delighted to claim Jesus as Welsh. But he wasn’t. He wasn’t Nordic, he wasn’t Scandinavian, he wasn’t African, he wasn’t Chinese – although it is perfectly acceptable and desirable to depict him in any of those guises. He was a Jew.

Such a statement about Jesus’s Palestinian identity is fine as a metaphor, in the same sense as “We are all Spartacus!” But it’s very different if phrased as a statement of historical fact. At that point, objective reality intrudes to observe that in a literal sense, no, you are not actually Spartacus, and no, Jesus was not a Palestinian.

If you want to say he was a Palestinian Jew, fine, but be sure to include that last word. Scholars have no problem in using the Palestine term for that ancient era, and in a strictly Jewish context. Even the Jerusalem Talmud, the Yerushalmi, is alternatively titled the Palestinian Talmud, and much of it is written in the dialect known as Jewish Palestinian Aramaic. In modern times “Palestine” is the standard preference of most mainstream historians and archaeologists writing about the Second Temple era, both Jewish and others. It is, for instance, the usage found throughout the respected Cambridge History of Judaism. But again, these are usages within Judaism.

Through history, various people have tried to dejudaize Jesus, commonly for sinister purposes. The Nazis pushed that point very hard. So, for their shame, did a fair number of New Testament critics at the end of the last century, who were so fascinated by the Wisdom teacher they found in the sources Q and the Gospel of Thomas that they made him out to be a kind of Greek Stoic.

Always get suspicious of any such account when it focuses on Galilee, and tries to claim that in Roman times, it was such a deeply Gentile-influenced realm, a land of half-breeds. It wasn’t. It was Jewish. In Jesus’s time, it was famous for what we might call Jewish fundamentalism, for extremists who regularly threatened to pour into Jerusalem to overthrow the Roman occupiers. It wasn’t only Jewish, it was Jewish on steroids.

Jesus, from Galilee, was a Jew. I’m sorry, have I said that already?

Let’s be charitable. Let’s assume that Mr. Copage has no idea of the larger scholarly world, and he shares nothing of the venom of Ilhan Omar, or Jeremiah Wright, or the Nation of Islam. Mr. Copage: please look long and hard, and you will not find a single scholar of any repute whatever, or any race whatever, who denies that Jesus was a Jew. None. This is not a debate.

What Mr. Copage is failing to understand is that when you say that Jesus belonged to ethnic group X, you are also saying that he was not a Jew. This is historical lunacy, and worse, it only has the goal of devaluing and insulting Judaism. Jesus was so good, he couldn’t have been a Jew, right? No, there is no way of proclaiming that “Jesus was a Palestinian” that is not, of its nature, anti-Semitic. As in Mr Copage’s case, the offense might arise from well-intentioned historical ignorance, devoid of any ill intent, but the statement of itself is still anti-Semitic, just as much as the assertion that “Jesus was Nordic.” Mr. Copage likely has not an anti-Semitic bone in his body. I hope many people read him and echo his excellent sentiments about ways of portraying the historical Jesus in art, or cinema. Jesus, who was a Jew.

If in fact that “Palestinian” notion has become embedded in so-called “progressive” subculture, that is truly alarming. It needs to be confronted wherever it appears.

Why would the Times have published that sentence? What does that fact say about the media attitude to religion, or to truth? 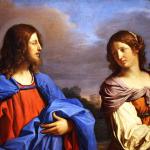 April 29, 2019 Early Christian Women and the Making of Scripture
Recent Comments
0 | Leave a Comment
Browse Our Archives
Follow Us!