To Prosperity, and Beyond!

Although I have some reputation in the academic world, my real glory and fame stem from one simple fact: that I am one of the diminishing band of individuals who remembers watching the first ever episode of Dr. Who on British television in 1963, the same weekend that JFK was assassinated in Dallas. And yes, I remember exactly where I was at that time. (I will sign autographs on request).

My acquaintance with science fiction, broadly defined, goes back a long way. As time goes by, I look back fondly at classic works that did a strikingly good job of predicting later realities — far better, in fact, than policymakers ever did. Although religion has rarely been a strong point in science fiction, one book in particular demands to be remembered for its prophetic treatment of most of the country’s significant trends over the past half-century. To name just a few topics, Robert A. Heinlein’s Stranger in a Strange Land has much to say about megachurches, cults, televangelists, the prosperity gospel, and the furthest extremes of the Religious Right. (I am adapting what follows from a column I wrote several years ago at RealClearReligion).

When it appeared in 1961, Stranger in a Strange Land seemed like a real departure for an author often dismissed as militarist and authoritarian. In retrospect, Stranger reads like a manifesto for the yet unborn hippy movement. Mars-born messiah Valentine Michael Smith leads a mystical cult pledged to limitless sexual experimentation, the Church of All Worlds. In more senses than one, the book attracted a devoted cult following: Charles Manson named a son “Valentine Michael.” It is appropriate to recall this as we think of the fiftieth anniversary of the horrendous Manson affair, and of course the whole culture now lavishly commemorated in Once Upon a Time in Hollywood.

Through the 1970s, Stranger was commonly cited as a prophecy of the alternative culture, making it seem ever less relevant as the country moved into the Reagan years. That is ironic, as other themes in the book now read as still more contemporary. If an earlier generation was fascinated by the Church of All Worlds, today we stand amazed at Heinlein’s prescience in inventing the Church of the New Revelation — the Fosterites.

The Fosterites are a triumph of religious satire, combining stereotypes of Mormonism, Scientology, and Pentecostalism, with a hint of Aimee Semple Macpherson. Heinlein himself had been a good friend of L. Ron Hubbard. At a time of social chaos, seminary reject Joseph Foster proclaimed a spiritual message uniquely suited for America, a nation that had always combined public puritanism with private libertinism. But why not combine the two instincts, creating a religion that spoke the language of fervent piety, while tolerating virtually any behavior?

Foster’s New Revelation borrowed from Freemasonry, Catholicism, the Communist Party and Madison Avenue, with a heavy dose of old time carny culture and backwoods country preaching. (The prophet himself recalls Joseph Smith). Believers who paid their dues and tithes would receive spiritual exaltation and the assurance of salvation, while not actually being required to observe any moral laws. God, said Foster, above all wants us to be happy, and he created alcohol for that purpose. Moreover, “the New Revelation did not actually encourage lechery, but it got quite mystical in discussing sexual conduct.”

Gambling is a potent source both of profit and spiritual expression. The church’s awe-inspiring Archangel Foster Tabernacle doubles as a Vegas casino, with a full range of slot machines, staffed by bouncers dressed as various stages of the angelic hierarchy. As the church declares in its central tenet of faith: Happiness, Happiness, Happiness!

Church leaders have mastered all the technological and psychological means needed to manipulate the faithful. The Tabernacle is a marvel of light shows, dance acts and music, with subliminal messages deployed to create feelings of sin and redemption. Advertisers sponsor hymns (“Dattlebaum’s Department Stores, where the Saved shop in safety!”). The church exists as a profit-making venture, dedicated to the exercise and enjoyment of absolute power — and all tax free!

The New Revelation, though, depends on organization as much as ideology. Its structure is threefold, from an outer church available to a middle church of true-believing tithe-payers, who became rich from the church’s insistence that members only give their business to fellow believers. Far more select is the secretive inner circle, chosen exclusively from the beautiful and good-looking — sports stars, strippers, and showbiz celebrities – who are totally exempt from any sexual restraints.

The only disputes within the spiritual-industrial complex involve homicidal leadership fights. Foster himself was poisoned in one such battle, although his body was subsequently enshrined as a major tourist attraction within the Tabernacle. At the time of the novel, the Supreme Bishop bears the evocative name of Huey Short.

However dubious the church might appear, it survives by its secret weapons of political power and intimidation. Claiming ten million members, it is a vast political bloc, which claims many public officials as members. And when that influence fails, critics and dissidents are silenced or killed by the church’s faithful members, who serve as violent shock troops.

The New Revelation is a perfect marriage of capitalism, consumerism, celebrity culture, and demagoguery. Thank heaven it could never happen in real life.

Heinlein was writing a satire, and it would be idle to describe anything he wrote as specific predictions. So much of the Fosterite church, though, must strike a chord with anyone who recalls the televangelist scandals of the 1980s, or the subsequent activities of glitzy Prosperity-oriented megachurches with their elegantly coiffed megastar preachers. To the best of my knowledge, I don’t think any of them yet sell advertising space in hymns, or offer product placement in sermons. Otherwise though, Heinlein did a wonderful job of foretelling the darker side of the American religious world over the past half century.

A further thought. Reading about the Fosterites today, the picture might be even more acutely relevant in Global South nations where megachurches and prosperity teachings have flourished so sensationally. We live in a Fosterite world. 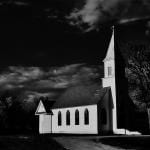 August 20, 2019 It's Not Just Evangelicals: Trump and Mainline Protestantism
Recent Comments
0 | Leave a Comment
"Great recommendations - they all sound fascinating, and I doubt I would have come across ..."
Elizabeth Cooledge Jenkins Recent Books on Women, Gender, and ..."
"Dr. Williams, what your article shows is that Sun Belt voters today (unlike those in ..."
Tony The Southernization of American Evangelicalism (and ..."
"I'm very interested in the one about enslaved women, but I am a science nerd, ..."
Donalbain Recent Books on Women, Gender, and ..."
"(2 Samuel 21:1) Then there was a famine in the days of David three years, ..."
Herrnhut Call It What It Is: On ..."
Browse Our Archives
Related posts from Anxious Bench