We may presently be witnessing the death of a nation that has existed for some centuries, namely Great Britain or the United Kingdom. Such a disappearance – which historically is far from unusual –  is a fascinating and disturbing phenomenon, which is profoundly informative about issues of identity, and even the construction of the self. In a religious sense, it is instructive for just where we place our ultimate loyalty – of how we define ourselves. The theme also has some very current relevance, in the lead-up to the British general election forthcoming this Thursday.

By way of background, back in 1991, I met a Soviet scholar visiting the US at the time of his home country’s tumultuous breakup. I found myself talking with someone whose national identity changed literally from one week to another. After a lifetime of being Soviet, with all the history and ideological baggage that name implied, suddenly he was Russian, a citizen of a brand new republic struggling to define which of multiple histories it wanted to reclaim. What a revolution in identity! A very short time later, millions of people who had known since birth that they were Yugoslavs suddenly found themselves Serbs, or Croats, or Slovenes. Before our very eyes, identities were being born, remade, and invented, usually with historical pasts being destroyed or reinvented to serve those new constructions of nationhood. It was amazing to watch.

But at least, I thought, it could never happen to older and more solid countries. Then it did.

I was born in Wales, which was part of the United Kingdom, or of Great Britain. I was thus British, not English, a distinction that confuses many Americans. The term “Britain” was invented specifically (by a Welshman) so that Scottish and Welsh people could share a common national identity and loyalty with the English who made up by far the largest share of the population. This made a Welsh person like me British by nationality and identity, and thus a very small part of that British story as it was told from ancient times through modernity, with such pivotal moments of national mythology as the Second World War. Welsh, Scots, English, and Northern Irish people were all British, all part of that larger national endeavor. We were part of what Winston Churchill called The Island Race – not the English race – united under a common monarchy. It is hard to exaggerate just how well that concept worked for several centuries. Scots and Irish flourished in the British Empire, and were massively over-represented among “British” generals and political leaders, not least figures like the Duke of Wellington and Viscount Montgomery.

Returning to my own experience, in the 1980s, I took US citizenship, and that is now wholly my nationhood and identity and loyalty: I immediately gave up my British passport. Still, like many immigrants, I retain an interest in my original home country, and I want to see it flourishing and prosperous.

But here is the problem. That home country seems to be in the process of dissolution. If not yet on the model of my Soviet or Yugoslav examples, that “British” identity is fading fast. The scale and speed of that change is hard to explain unless you understand that idea of “Britishness,” as opposed to Englishness. Just as a convenient symbol, I think of flags. In 1966, Britain experienced one of its great post-World War II moments when England (stress, England) won the Soccer world cup, defeating West Germany. It was a time for enormous patriotism and flag waving, and all the flags were Union Jacks, the symbols of unified Britishness. That is to say, English people were happily waving those flags as patriotic emblems. Somewhere from the late 1970s or so, something changed fundamentally, with a strenuous new assertion of English identity. English flags began to appear – red crosses of St George – and they have now become ubiquitous. Just how novel that development is might be hard to realize for any0ne aged below forty or so, but I repeat – those flags were just not there before the 1970s. Meanwhile, if Union Jacks have not vanished, they are much rarer than they were.

Increasingly, the strains between the various countries of the United Kingdom became starker. Calls for Scottish independence became commonplace, and made serious gains, although they were held within bounds until recently. The 2014 independence referendum marked a 55-45 percent majority in favor of national union, but even so, the number favoring secession was impressive.

Reinforcing that change has been the rapid decline of automatic loyalty to the monarchy which long served as the unifying force for Britain, and beyond it for the now extinct empire. People still care very much about the monarchy, but it is a very different world from the near-religious awe of just fifty or sixty years ago. Matters will be further tested after the passing of the present queen, who has been an utterly familiar part of British life and existence since 1952, when the world was still  led by Stalin, Truman, and Churchill. Again, it is a symbolic change, but at the end of the last century, British passports changed subtly from showing a person as a British subject – that is, subject to the Crown – to being a citizen, a more generic (and de-royalized) concept.

Like everything else in “British” politics, everything has been cast into chaos by the referendum decision to leave the European Union, Brexit or “British Exit.” Despite its name, the Brexit vote was above all an English vote to leave the EU, by a margin of 53.4 to 46.6. Scotland, meanwhile, voted crushingly Remain, by a margin of 62-38, and Northern Ireland was Remain by 56-44. Wales would also have been in that camp, were it not for large numbers of retired English people living in that country. So England decided, and they are taking the rest of the country with them into that particular catastrophe. The referendum was a vote for Little Englandism, not Little Britain. (How I wish the country was guided by anything like the wisdom and sanity of the excellent TV show of that name).

Now, Brexit is a very contentious issue, and I want to present the continuing debate with strict objectivity. Some people see Brexit as the worst decision a British government has taken since the Second World War. Others say it is the worst since 1776 and the loss of the American colonies. Only time will tell which of the two positions is correct. Sadly, nobody heeded the wise words of the former Labour leader, Clement Attlee, who bitterly objected “to the introduction into our national life of a device so alien to all our traditions as a referendum, which has only too often been the instrument of Nazism and fascism.”

But in the short term, the impact of Brexit on nationhood has been overwhelming. At its most immediate, the current British proposal for separation from the EU creates an international economic boundary between Northern Ireland and Great Britain, effectively ceding that province to the nation of Ireland within a decade or so. However the details work out, that feckless decision to forfeit part of the national territory speaks volumes for just how far the “British” government has come to see itself only in terms of England. In Scotland, Brexit is so ferociously unpopular that it makes that nation’s independence just a matter of time. Wales itself is so thoroughly integrated into England that it is unlikely to follow suit. But realistically, whatever name it adopts, the nation of “Britain” within a decade or so should be more or less synonymous with England. The nation of Great Britain will have ceased to exist.

I will be watching this Thursday’s British elections with keen interest, although I am totally unable to predict outcomes. Even if the polls are correct, the vagaries of the electoral system make it all but impossible to predict the balance of Parliamentary seats. Could Boris Johnson’s Conservatives get a straight majority? Certainly. But imagine a plausible scenario where Conservatives and Brexit supporters win heavy majorities in England, but are thwarted in their larger goals by non-Conservatives and Remainers in the three other components of the nation. Imagine the fury and resentment in England at the denial of their cherished project to create a new nation outside the European Union – a “stab in the back,” a denial of democracy …. It would be ugly to watch, and would constitute a devastating blow to the concept of union.

It would also represent a decisive stage in the continuing process by which Conservatives become explicitly and entirely the English nationalist party, without any serious British pretensions. When the votes are counted this week, just see how many Conservative seats there are outside England.

To venture still further into speculation, imagine a far left Labour government installed and held in power through a coalition with the Scottish Nationalists. That would fulfill all Conservative (and English) nightmares. Indeed, I’m not the first person to use the terminology of  a Nightmare on Downing Street on (this coming) Friday the Thirteenth. If it did happen, wait for those St. George flags to blossom in their many thousands.

I, as I say, am an American, so all this does not affect me directly. But assume I still lived in that future Untied Kingdom (typo intended), but as a non-English person. Just think of how I would have to reconstruct that whole history, that identity, to find in it parts that actually belong to me. British history, as such, would cease to exist. As the old Soviet proverb declared: the future is quite fixed, but the past changes every day.

Only when something like that happens do we realize just how thoroughly our identity is tied up with that theme of nationhood, of nationality, of patriotism. In the words of the prophet Joni, you really don’t know what you’ve got till it’s gone.

In some ways, this takes us back to the Middle Ages, when Europe’s nations were such fragile things, adding to people’s need for a higher religious loyalty. That is why they turned so readily to “Christendom,” the Res Publica Christiana, a true overarching unity and a focus of loyalty transcending mere kingdoms or empires. Kingdoms such as Burgundy, Wessex, or Saxony might last for only a century or two before they were replaced by new states and dynasties, but any rational person knew that Christendom simply endured. We grew up thinking we lived in a very different kind of modernity, based on the nation state – but maybe we don’t, and perhaps we never really did.

Nations are imagined communities, and sometime they unimagine themselves. It can happen very quickly. Thank heaven the United States could never evaporate like the United Kingdom seems to be doing. Well …

Back to Christendom, anybody? 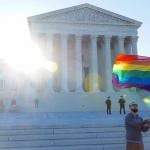