I have written a lot related to the centennial of the First World War. One of my main themes has been the stunning juxtaposition in those years of radical modernity – in the form of tanks, aircraft, gas weaponry, and mass industrial warfare – and the truly ancient religious ideas that people used to comprehend what was going on around them.  The visual record of the war years is awash with images of angels and Armageddon. People spoke the language of holy war, of cosmic war.

Last year, I had the singular opportunity to see some spectacular images illustrating this theme to perfection. In 2019, London’s Tate Modern did an amazing exhibit of the works of Russian Modernist Natalia Goncharova (1881-1962), part of the famous Blue Rider school. Goncharova was a cutting-edge figure in the explosive Russian art world of the time.

She was obsessed with Christian themes, specifically those of the Russian Orthodox tradition. In 1910, she created her stunning image of the archangel Michael, the leader of the heavenly hosts in Revelation’s final battles. Although an advanced Modernist, her work draws heavily on Russian icon traditions. In 1915, she designed sets for Sergei Diaghilev’s planned ballet Liturgy, which was to feature such ancient images as the six-winged seraphs, with music based on Orthodox Christian liturgical themes.

One of her most striking achievements was her Mystical Images of War, which she created as part of Russian propaganda in the war against Germany. I quote:

Goncharova’s series Mystical Images of War was published in autumn 1914, picturing the war as both patriotic and catastrophic. The national symbols of the Allied Powers (Britain, France and Russia) are brought together with images from the Book of Revelation and Russian medieval verse. Blending contemporary warfare and ancient prophecy, Goncharova portrayed angels wrestling biplanes, the Virgin Mary mourning fallen soldiers, and the Pale Horse that Death rides in the Apocalypse.

You can see a full list of those images here, together with their very powerful captions, which indicate just how thoroughly Russia regarded its Great War as a holy crusade for faith, as much as nation. But the most striking thing for me is how she integrates those ancient ideas with absolutely the most daring technology of the day, especially aircraft – which are nevertheless wholly blended with angelic hosts. The battlefront, for Goncharova, is literally a theater in the ongoing War in Heaven. 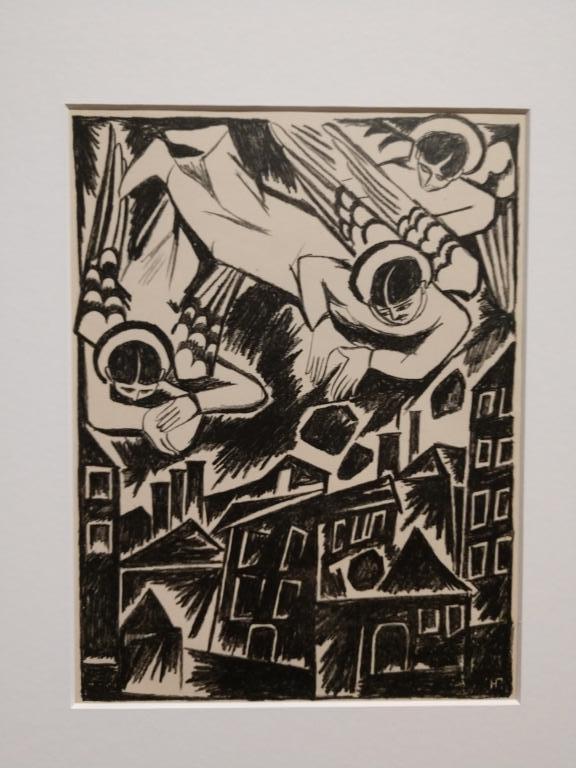 The Mystical Images offer something like a catalog of the images of Russian faith, and of holy war. What for instance do we make of this next image? The two men are actually Peresvet and Oslyabya, and don’t worry if you have never heard of them. For the Orthodox, they are legendary Christian heroes, as the warrior monk Alexander Peresvet was killed fighting the Muslim Tatars in 1380. So Tatars then, Germans today – what’s the difference? It’s still a holy war. 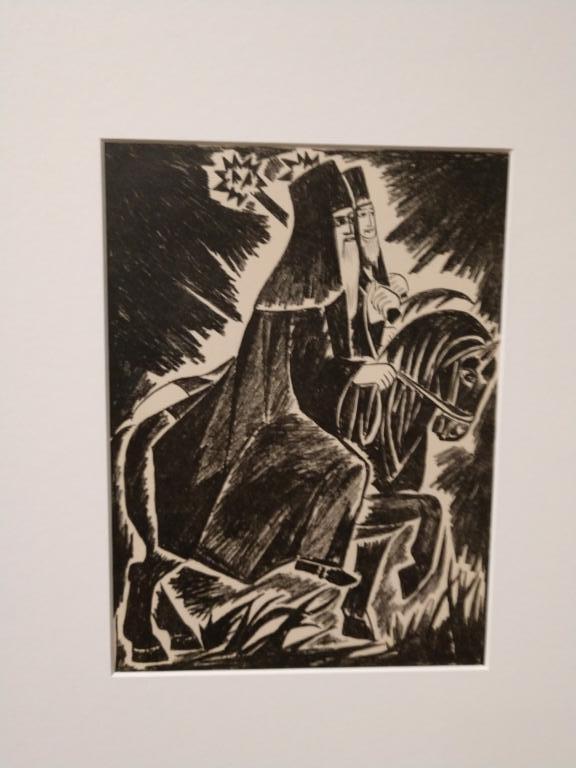 By the way, in 2018, Vladimir Putin’s Russia announced a daringly innovative new military laser weapon system which is called, what else, the Peresvet. That was the outcome of a “name-that-weapon” contest. Some things don’t change.

This next picture looks like very modern Russian soldiers going into war, but the caption is “The Christian Host.” 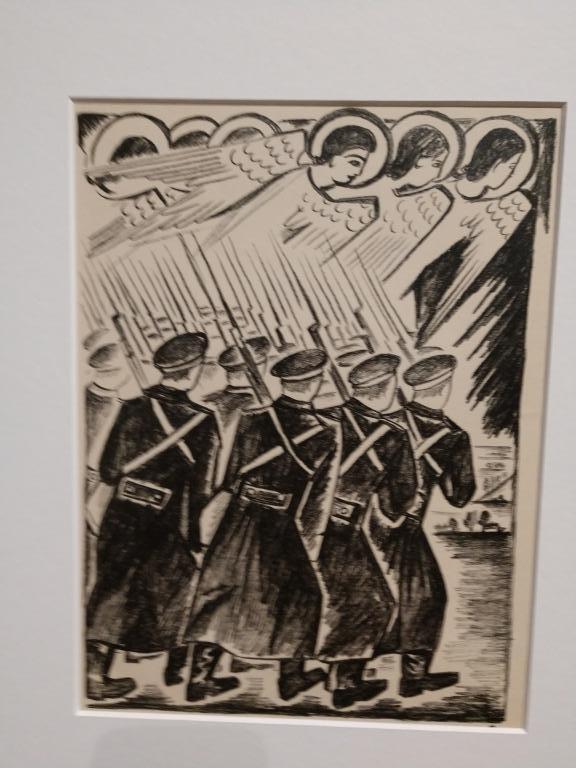 When holy warriors perish, and are buried in a common grave, we have faith that God’s angels care for them. 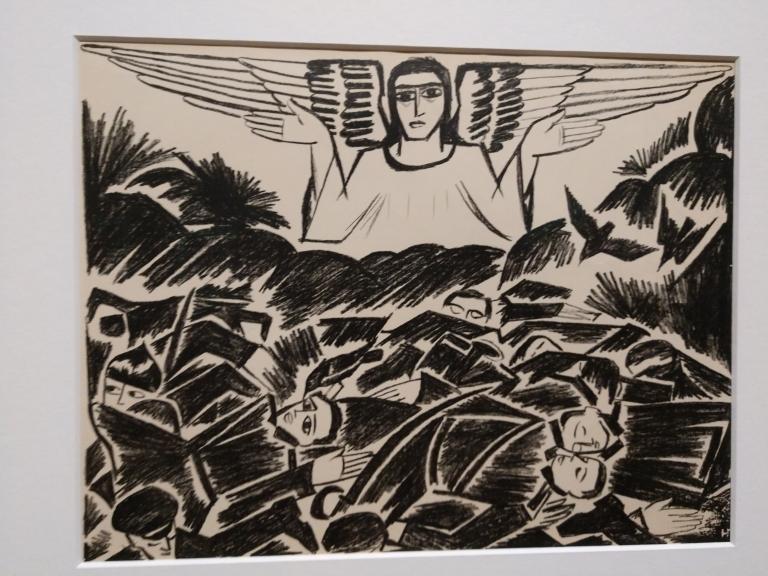 We sometimes draw a division between the pre-industrial age, which was supposedly pious and faithful, and the bold new world of industrial modernity, where religion faded into irrelevance. In the famous words of Rudolf Bultmann, “We cannot use electric lights and radios and, in the event of illness, avail ourselves of modern medical and clinical means and at the same time believe in the spirit and wonder world of the New Testament.” But obviously, modernity did not destroy faith, and Modernist art and culture not only maintained those older ideas, but reveled in them.

In 1933, Bolshevik Leon Trotsky remarked with disgust on the failure of modern technology to root out supernatural beliefs, and he would be scarcely less appalled today:

Today, not only in peasant homes but also in city skyscrapers, there lives alongside of the twentieth century the tenth or the thirteenth. A hundred million people use electricity and still believe in the magic power of signs and exorcisms. The Pope of Rome broadcasts over the radio about the miraculous transformation of water into wine. Movie stars go to mediums. Aviators who pilot miraculous mechanisms created by man’s genius wear amulets on their sweaters. What inexhaustible reserves they possess of darkness, ignorance, and savagery!

And he was writing before the coming of the Internet.

For better or worse, the photographs are all my own work.