Should the United Methodist Church Split over Same-Sex Marriage?

Most mainline American Protestant denominations have liberalized their stance on same-sex relationships in recent years. The Presbyterian Church, USA (PCUSA), the Evangelical Lutheran Church in America (ELCA), the American Baptist Churches, USA (ABCUSA), and the Episcopal Church, USA (ECUSA), among others, now preside over same-sex marriages and ordain ministers in same-sex relationships. The United Methodist Church, by contrast, retained its traditional stance barring both of those practices longer than other mainline denominations.

Part of what made the difference is the structure of the UMC versus that of other American denominations: the UMC is robustly international. Note the “A” in the PCUSA, ELCA, ABCUSA, and ECUSA—but not in the UMC. These other denominations are “American” in the sense that they consist dominantly of churches located in the United States. The UMC, meanwhile, consists of churches from around the world, with 41% of delegates hailing from outside the United States. The largest non-American contingent came from Africa. African churches are more sexually traditional, and their votes combined with the conservative contingent from within the United States to defeat the proposed measure to liberalize the denomination’s practice with respect to same-sex marriage.

American conservatives often perceive this fact as evidence that their interpretation of God’s design for healthy sexual ethics is in line with the broader Christian church—not only throughout time but also throughout space. Meanwhile, American liberals wrestle with how to advance their interpretation of how the Christian message is liberating in the same way with respect to both race and sexual orientation. How should they respond when a postcolonial portion of the world exercises its voice to say that those two issues are distinct?

But the question of the moment for the UMC is not so much what to believe about same-sex marriage, as what to do when your neighbor churches radically disagree with you on the question. The vote was close: 53% to 47%. What does it mean in this case to love your neighbor as yourself? Should you fight it out together? Or should you split as amicably as possible?

Conservatives believe same-sex relationships constitute direct disobedience to God’s revealed will for human flourishing—quite literally unrepentant sin at a high level. Liberals believe forbidding same-sex relationships violates the second greatest commandment to love your neighbor as yourself, to do unto others as you would have them do unto you—quite literally unrepentant sin at a high level. Yet both believe that Jesus prayed that his followers, “may be brought to complete unity” and also that on a practical level disseminating the Christian message and serving the world can often be done more effectively as a coordinated effort. What to do?

None of this is binding until the delegates to this year’s UMC General Conference vote in May. And some conservatives and some moderates have expressed reservations.

The question before the delegates will be:

I wrote these two questions at the top of notes I have been taking recently on the history of American Methodists for a project I’m researching. The project is on the fundamentalist-modernist controversy of the early twentieth century: the conflict between theological (and sometimes social) conservatives and liberals that roiled many American denominations, including Methodists. Interestingly, however, it did not divide Methodists as much as Baptists and Presbyterians.

They had split over: whether to have bishops, how much say lay members of the church should have, views on slavery, and interpretations of distinctly Wesleyan doctrines like entire sanctification in this life. They subsequently further disagreed on things that had not caused the initial split, such as whether to ordain women or whether to have racially integrated churches.

To be fair, Presbyterians, Baptists, and others worshiped in multiple denominations as well. On the whole, though, the bulk of (white) parishioners in the early twentieth century fell into one of two large denominations within a tradition—one based in the north (such as the Northern (later, American) Baptists) and one based in the south (such as the Southern Baptists). These splits were a legacy of the fight about slavery that ultimately broke out into the Civil War. But more American Protestants were Methodist than belonged to any other tradition, and Methodists had more substantial denominations to choose from.

Methodists of the early twentieth century longed to corral their disparate manifestations into a more centralized denomination. They hoped doing so would make for more coordinated—and hence more effective—evangelism, discipleship, and service. In 1939, the Methodist Protestant Church, the Methodist Episcopal Church, and the Methodist Episcopal Church, South united into “The Methodist Church.” In 1946, the Evangelical Association and the United Brethren Church united into the Evangelical United Brethren Church. Finally, in 1968, these two groups joined to form the present United Methodist Church.

The history of American Methodism therefore points to this truth for Christian churches: there is always a cost to unity, and there is always a cost to division. In this life, Christians will not always agree. I joke that as a Protestant intellectual there is no other human on the planet with the exact same set of beliefs as me. Belonging to a church forces me to interact with others who agree with me on the most important things, but differ on other things that are still important. Worshiping with people whose political, social, and even to some extent theological ideas differ is an important way that the church can model a better way than the deeply polarized political and social climate of the current United States.

The tricky part is determining where to draw that line: both for matters necessary to salvation, and, separately, for matters necessary to productive work together as a congregation or denomination. Different Christians, different churches, and different denominations will answer these questions differently. And maybe there is some value in that. Perhaps having some narrower and some broader denominations is the only way for the church as a whole to live out different goods. It is up to the United Methodist delegates to discern their particular calling. 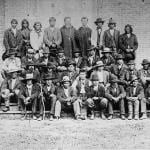 February 4, 2020
When Minnesota Was the Frontier: "Home Missionaries" in the 19th Century
Next Post 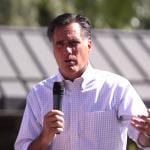 February 6, 2020 The Most Important Moment of Mitt Romney’s Speech Was When He Said Nothing At All
Recent Comments
4 Comments | Leave a Comment
Browse Our Archives
Related posts from Anxious Bench