Why Evangelical Women Should Mourn the Loss of #RBG Too

Why Evangelical Women Should Mourn the Loss of #RBG Too September 21, 2020 Beth Allison Barr

I missed the announcement of her death.

We had gone out for our first movie since the pandemic began in March. I was grumpy because I had wanted to eat out too, as the local (and I have to add historic) Hippodrome Theatre in Waco features dinner. I had been outvoted. Apparently I make really good pizza from scratch. Still, it was such a relief to get out of the house and do something together as a family. I purposefully left my phone at hom 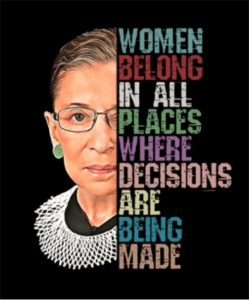 So it wasn’t until later Friday evening that I realized what had happened. Justice Ruth Bader Ginsburg, the second woman appointed to the United States Supreme Court, had died from cancer complications. She had served on the Supreme Court for 27 years.

For many evangelical Christians, the loss of Ruth Bader Ginsburg creates a welcome opportunity: the chance to snag one more seat for a conservative judge on the Supreme Court before the November 2020 election. As Shuran Huang wrote for NPR, “Her death will inevitably set in motion what promises to be a nasty and tumultuous political battle over who will succeed her, and it thrusts the Supreme Court vacancy into the spotlight of the presidential campaign.” Indeed, many evangelicals claimed this was the premise undergirding their support for a man like Donald Trump in 2016–a man who “flouted every value” held “dear” by conservative evangelicals (see Kristin Kobes Du Mez for her evaluation of this claim).

Plus, Ruth Bader Ginsburg was pro-choice. She supported abortion rights. World Magazine (a conservative Christian publication) was quick to point this out. “Only the second woman to serve on the U.S. Supreme Court, she shaped her legacy as a lawyer, then judge, as an advocate of women’s rights–which in her mind included no restrictions on government-funded abortion. She described herself as a ‘flaming feminist.'” Within the first three paragraphs of her article announcing Ginsburg’s death on Friday, World senior reporter Emily Belz described Ginsburg as liberal, feminist, a supporter of unrestricted abortion, a critic of Donald Trump, and a supporter of gay marriage. Belz then got to straight to the evangelical point: “With a Ginsburg replacement like 7th U.S. Circuit Court of Appeals Judge Amy Coney Barrett, a 6-3 conservative majority would tilt the court’s balance of power. The court might have the votes to overturn Roe v. Wade, for example, and even overrule Chief Justice John Roberts’ moderating efforts on a number of issues.”

So Ginsburg’s loss–although certainly sad for her friends and family–is definitely an evangelical gain. Right? After all, what could the leader of the liberal faction of the Supreme Court, a “flaming feminist” in her own words, have done to help evangelical women like me?

Oh, so many things.

When I was born in 1975, Ruth Bader Ginsburg was already fighting to make my future better. While evangelical women, fearing what they would lose with the ratification of the Equal Rights Amendment, rallied around Phyllis Schlafly as she championed a woman’s “right to be in the home as a wife and mother,”  Ginsburg was methodically chipping away at legal barriers that hindered women’s equality. Relying on the 14th Amendment’s equal protection clause, ‘nor shall any state deny to any person the equal protection of the laws,’ Ginsburg filed brief after brief during the 1970s that reshaped how women were viewed by the law–as human rather than a special case. By the time Schlafly’s grassroots movement garnered enough support to defeat the ERA in 1982, Ginsburg had already laid the legal foundation to dismantle sex discrimination despite the ERA failure. As columnist Moria Donegan writes: Ginsburg’s legal “victories, coming down between the years 1971 and 1976, forced laws to change nationwide. It is impossible to overstate their impact. One moment, much of family, tax, and financial law was made of statutes that codified men as breadwinners and beneficiaries, women as dependents. Within just five years, all these laws were declared unconstitutional.” So, long before I even knew her name, Ruth Bader Ginsburg made it possible for my future self to own a credit card in my own name. She made it possible for my financial and employment status to stand as strong and independent as that of my father or husband.

When I accepted a tenure-track position in 2008 as a History professor, Ruth Bader Ginsburg was still working hard to insure that I really received equal pay alongside my male colleagues. In 1963, after joining the Rutgers Law School faculty, she discovered her pay was less than that of male faculty. She soon joined with other female faculty to campaign (successfully) for equal pay. 10 years later, in 1972, she founded the Women’s Rights Project with the American Civil Liberties Union.  Her goal was to remove barriers and open doors for women in all areas of American life, including insuring equal pay for equal work. In 2007, just one year before I began as a tenure-track professor, Ginsburg wrote a landmark dissenting opinion in LedBetter vs. Goodyear. A female employee had sued Goodyear for years of pay discrimination, but lost the case due to a 180-day time limit for filing grievances. Ginsburg publicly called for Congress to fix what the Supreme Court had not, writing that pay discrimination often occurred in “small increments” over long periods of time and was many times “hidden in plain sight.” She equated pay disparity with a “hostile work environment” and called for employers to be held accountable for wage discrimination. Congress passed the Lilly Ledbetter Fair Pay Act in 2009, hence forth allowing employees to file wage discrimination after each paycheck “rather than after the initial decision to pay a worker less.” In other words, Ginsburg gave teeth to equal pay for equal work–helping women’s contributions to the family income to be just as meaningful as men’s contributions. Since women make up nearly half the U.S. labor force, Ginsburg’s fight against pay disparity has made a significant difference in the lives of all women, including those like me who identify as evangelical.

When I became pregnant with my son (born 2004) and my daughter (born 2010), Ruth Bader Ginsburg had–again–already snowplowed my road.  Although my employer did not yet offer consistent access to parental leave and I continued teaching in-person throughout the semesters I gave birth to my children (both C-sections), Ginsburg had at least insured that I could not lose my job for being pregnant. Yes, that really happened to women–even as late as the 1960s and 70s. Ginsburg herself resorted to wearing baggy clothing to hide the pregnancy of her son until after she signed her next-year teaching contract at Rutgers. But, after 1978, women no longer had to worry about pregnancy (at least from the legal standpoint) ending their careers. The Pregnancy Discrimination Act was passed as an amendment to Title VII. It was a direct result of Ginsburg’s efforts with the ACLU Women’s Rights Project and declared workplace pregnancy discrimination as “unlawful sex discrimination.”

Women who choose to stay home and raise their children can still do so–nothing bars their choice. Because of Ruth Bader Ginsburg, nothing bars my choice either–to do the work that God has called me to as a professor and historian while still raising a family with my husband.

Scholar, author, and Christian intellectual Dorothy L. Sayers gave an address in 1938. She argued “that a woman is just as much an ordinary human being as a man, with the same individual preferences, and with just as much right to the tastes and preferences of an individual. What is repugnant to every human being is to be reckoned always as a member of a class and not as an individual person.” The work of Ruth Bader Ginsburg has laid the legal groundwork to make Sayers argument more of a reality for American women. For women to be recognized as human just like men instead of always as different from men. “Women’s rights,” Ginsburg wrote, “are an essential part of the overall human rights agenda, trained on the equal dignity and ability to live in freedom all people should enjoy.” Because women are human first, even if their bodies and aspects of their lives differ from men, that does not justify women’s classification as legally distinct–of lesser value and with fewer rights–than men.

If these are not enough reasons for evangelical women to join me in mourning the loss of Ruth Bader Ginsburg, let me give you two more points to consider.

First, despite the attempts of World Magazine to define Ruth Bader Ginsburg primarily as liberal and opposite from traditional evangelical values, Ginsburg epitomized civil discourse. One of her closest friendships on the Supreme Court was with conservative Justice Antonin Scalia. I certainly would not have stood with all Ginsburg’s decisions, but I am certain that would not have made Ginsburg any less likely to stand with me against sex discrimination, nor even less likely to come to dinner with me had I ever had the chance to ask her. As she said about her relationship with Scalia, “If our friendship encourages others to appreciate that some very good people have ideas with which we disagree, and that, despite differences, people of goodwill can pull together for the well-being of the institutions we serve and our country, I will be overjoyed, as I am confident Justice Scalia would be.” Ginsburg could teach us so much about how to disagree with dignity and respect, if only we would listen.

Second, in an evangelical world that still denies women a place at the leadership table, that still allows discrimination on the basis of a woman’s sex, the legal career of Ruth Bader Ginsburg gives me hope. Ginsburg has proven beyond doubt that “Women belong in all places where decisions are being made.” For evangelicals who believe that women and men are both created in the image of God–indeed, that both sexes bear the image of God–I only hope that evangelicals come to the same realization as the Supreme Court: that women too belong on the bench with men. Not because the law requires it. But because evangelicals finally understand that the Gospel has always called us to it.

Thank you, Ruth Bader Ginsburg. You give me hope that our world, even my world of American evangelicalism, can be a better place for women.

September 18, 2020
Breaking Bread with the Dead and the Living
Next Post

September 22, 2020 RBG, Historian: Why Justice Requires Memory
Recent Comments
0 | Leave a Comment
Browse Our Archives
get the latest from
Anxious Bench
Sign up for our newsletter
POPULAR AT PATHEOS Evangelical
1