How a Climate Disaster Reshaped the World’s Great Religions

Throughout history, climate-driven disasters have a driven sudden and revolutionary change in human societies, transforming political, economic and religious orders, and laying a foundation for new structures. Often, these revolutionary epochs have had far reaching religious consequences. I write about this phenomenon at length in my current book, Climate, Catastrophe, and Faith: How Changes in Climate Drive Religious Upheaval, but here let me offer one of the most intriguing and understudied examples I found in that research. Briefly, did such a climate catastrophe make possible the rise and victory of Islam in the seventh century? How did it affect the growth of Christianity in the British Isles?

Some – by no means all – of the most dramatic such upheavals are closely associated with gigantic volcanic eruptions, occurring perhaps on the Pacific Rim, along the “Ring of Fire.” Such events literally cast a shadow around the whole world. The resulting black clouds drop temperatures, and can ruin food production for a period of perhaps three or four years. One of the best-known examples is what occurred with the Indonesian volcano of Tambora, which erupted in 1815, and which generated famine and political crises across Europe over the following four years. Rains were astonishing, and 1816 was “the year without a Summer.” Very often, such events are followed by grave outbreaks of plague or pestilence.In South Asia, the rapidly changing environmental conditions following Tambora, and the disrupted monsoons, allowed a previously harmless bacterium to evolve into a lethal new strain. Over the next decade, the world suffered its first cholera pandemic, a curse that blighted the coming century.

Such devastating terrestrial events leave traces in various forms, in ice cores or tree rings, when such a sequence of dark and cold years indicates that a cataclysm has occurred. Often, it is easy to correlate the key dates with historical records and find that, yes indeed, that particular era was richly productive of social collapse, political revolutions, and apocalyptic religious movements. How could it not have been? In looking at the effects of such a hammer blow, everything depends on just how strong states and economies were, and how able to withstand disaster. Even the powerful states of early nineteenth century Europe struggled to deal with the effects of Tambora, and in earlier times, more rudimentary state mechanisms must have crumbled or vanished altogether.

Over the past two millennia, the physical records point to many small phenomena, but to just a few really gargantuan examples, when conditions across much of the globe must briefly have become really hellish. These were absolutely not good times to be alive.

One of the most appalling examples involved a catastrophe in 626-627 AD, when a global occurrence – presumably an epically large volcanic eruption – left its unmistakable scar in tree ring records as far afield as North America. In the words of one scientist tracking those rings, “A few events are so severe that they show up in every tree … 2036 B.C., 43 B.C., 627 A.D.” If not exactly a once in a millennium event, this one was a lulu (that’s a technical geophysical term, honest). From another source, I quote:

A dry fog was reported from Ireland and the eastern Mediterranean, for 9 months starting in the October of about 626. Ash fell in A.D. 626 at Constantinople. …  The impact on European weather appears to have been limited, but Asia was badly affected. Chinese records talk about frost disasters and famine from 626 to 629. One record from 628 mentions: “There has been a frost in midsummer. The sun had risen from same place for five days. The moon had had the same light level for three days. The field was filled with red atmosphere (dust storm).”

That event sparked renewed crises across Eurasia over the next five years. The sudden cooling and darkening wiped out livestock herds, precipitating the collapse of the Eastern Turkic Empire, then the most powerful state in northeast Asia. The southward migration of other Turkic peoples led to overwhelming assaults on the already stumbling Persian Empire, where Mesopotamia now suffered a plague that reportedly killed half its population.

Put simply, 626 was an empire slayer.

These developments had vast and enduring political consequences. For twenty years, the East Roman Empire had been locked in a death struggle against the Persians, when for a while it seemed likely that the Persians would eliminate and absorb the Roman world. The Roman Emperor Heraclius had made an enormous comeback in the previous few years, but the crisis of 627-8 made possible an overwhelming victory. Assisted by those Turkish hordes sweeping in from the north, Heraclius won a decisive victory at Nineveh in 627. In 628, the Persian king was assassinated and the regime came close to collapse, giving the Romans an absolute victory.

Accounts of those wars often make reference to weather conditions, but rarely pay specific attention to the volcanic effects. What gave Heraclius victory, for instance, was his ability to push forward in a dire winter that deterred his enemies. Also, we must remember what the armies of the two superpowers looked like in this era. Both Rome and Persia relied heavily on large and sophisticated military machinery, which included battlefield artillery designed to overwhelm enemies with missiles, stones or arrows, as well as siege engines. Both sides were heirs to a millennium of brilliant military engineering and mathematics dating back to Archimedes and beyond. But however lethal such weapons were in themselves, their users had to be able to see to shoot.

The critical Battle of Nineveh had the result it did because what was described as a heavy “fog” prevented the Persians from using their terrifying missile-throwing artillery. Given the climate conditions of that precise year, of 627 AD,, that sounds exactly like the post-Tambora volcanic clouds that people wrote about a millennium later, which turned day to night. Other accounts mention drenching rains that left the Persian bowstrings sodden and barely usable: again, shades of Tambora. The “fog of war” – and the accompanying rains – ensured Roman victory.

In neighboring Arabia, this was just the time when the Prophet Muhammad was struggling against the wealthy trading elites, preaching a message of divine Judgment that suddenly sounded all the more relevant. Weren’t the skies literally turning dark, as famine and plague swept the land? Although the sequence of events is uncertain, the calamity undermined those traditional leaders, wrecking their food supplies and trade networks, and opened the way to the revolutionary new Islamic order. Muhammad’s forces initially suffered repeated setbacks but he now recovered to consolidate his hold on Medina, where in 627 he won the decisive Battle of the Trench, Al-Khandaq. The following year, the Muslims signed the crucial Treaty of Hudaybiyyah with the Meccan Qurayshi tribe, giving the new movement an unprecedented degree of recognition and respectability. Muhammad finally took Mecca in 630, and Muslim forces had conquered most of Arabia by 632.

As those forces expanded out of Arabia, they easily conquered the older states and empires that were now fatally weakened, including Rome and Persia. Besides the interminable wars, plague had shattered the older societies. The conquest of Persia resulted in the utter destruction of the Zoroastrian religious hierarchy and its institutional structures, and gradually, the near-total elimination of that faith. Zoroastrianism faded from being a major world religion to a marginal and often despised creed. It was Islam that triumphed across much of Southern and Western Asia.

The succession of climate catastrophes smashed long-established transcontinental empires and religious structures, and opened the door to altogether new entities. Did climate factors “cause” the rise of Islam? Of course not. But they accelerated the political and military victory of that new faith.

I also note one other critical religious development at this very time, in the British Isles. This requires some background. The scholarly source I mentioned earlier remarks that Europe was not that badly affected by the 626-627 episode. Well, maybe. But the 620s are an abominably badly recorded era in West European history, at least by contemporary sources, and it might well be that the lack of comments about dreadful weather might just reflect the near-total scarcity of literate observers. To take an obvious example, the best and most copious source on Frankish history was Gregory of Tours, who had died a generation earlier. But if you look at reliable scholars writing not too long after the event, they recall a rather different story.

In the 620s, the most significant kingdom in Britain was the Anglo-Saxon realm of Northumbria, under its king, Edwin. In that pivotal year of 627, he accepted Christianity and was baptized, in an epochal moment in British (and West European) religious history. A century later, the historian Bede recalled the debates among Edwin’s royal council over the new faith. Bede was in an excellent position to know these transactions in some detail, because of the range of sources to which he had access – family traditions, but also what we might call oral history from participants, or their children.

At the crucial meeting that preceded Edwin’s decision, one noble decided the debate when he remarked that

The present life of man upon earth, O king, seems to me, in comparison with that time which is unknown to us, like to the swift flight of a sparrow through the house wherein you sit at supper in winter, with your ealdormen and thegns, while the fire blazes in the midst, and the hall is warmed, but the wintry storms of rain or snow [turbinibus hiemalium pluuiarum uel niuium] are raging abroad. The sparrow, flying in at one door and immediately out at another, whilst he is within, is safe from the wintry tempest [hiemis tempestate]; but after a short space of fair weather, he immediately vanishes out of your sight, passing from winter into winter again. So this life of man appears for a little while, but of what is to follow or what went before we know nothing at all. If, therefore, this new doctrine tells us something more certain, it seems justly to deserve to be followed.

It’s one of the most famous passages in English historical writing. And the power of the rhetoric does gain immensely when we realize that the skies in that winter of 626-27 were terrifyingly dark, and that wintry storms of rain or snow really were raging abroad. This was not just a generic “It was a dark and stormy night.” These were conditions of a kind that would have been beyond human memory.

Besides my recent book, a couple of important sources include Alex Ross, “The Past and the Future of the Earth’s Oldest Trees,” New Yorker, January 13, 2020; and Jie Fei, Jie Zhou and Yongjian Hou, “Circa A.D. 626 Volcanic Eruption, Climatic Cooling, and the Collapse of the Eastern Turkic Empire,” Climatic Change 81 (2007): 469–475. 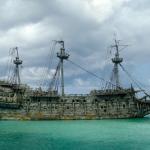 June 19, 2021 Juneteenth: A Holiday "Tailor-Made for History"
Recent Comments
0 | Leave a Comment
Browse Our Archives
get the latest updates from
Anxious Bench
and the Patheos
Evangelical
Channel
POPULAR AT PATHEOS Evangelical
1