Scholars speak of micro-histories, very specific and local instances that potentially reveal a much larger world. But sometimes, a single object can open many doors, and to quite unsuspected realms. Here is the story of an amulet that was worn by a Protestant soldier in the sixteenth century Wars of Religion – who carried into battle a (Jewish) Qabalistic charm.

I have been working on the history and reception of Psalm 91, which has an impressive career as a talisman against evil and harm: witness the bandannas worn by US troops in Iraq, and the Psalm 91 masks to defend against COVID. But this is anything but a new phenomenon. Back in the sixteenth century, Protestants and Catholics were engaged in ferocious wars, and the French conflicts alone (1562-98) might have claimed two million lives. Both sides made free use of scripture on their behalf, as slogans, war-cries, prayers for victory, or pleas for protection. Psalm 91 was one text freely used, although the dubious honor for the most cherished war-hymn goes to Psalm 68.

In 1569, French Protestants were besieging the Catholic-held city of Poitiers, where a German reistre, a cavalryman, fighting on the Protestant side was shot and killed. This was nothing unusual in itself, but the incident attracted the special attention of the contemporary historian of the struggle, the linguist and scholar Jean Le Frère de Laval, in his La vraye et entière histoire des troubles et guerres civiles, avenuë de nostre temps, pour le faict de la religion, tant en France, Allemaigne que pays bas (1573). Jean Le Frère used the story to offer a short lecture on Classical religion, and also (of course) to mock the stupidity of Germans, but in so doing, he made some fascinating points.

As we are told (345-346), hanging from the reistre’s neck were two taffeta purses. One contained a parchment folded in four, written in Hebrew letters organized in ritualistic geometric style. I quote Le Frère’s somewhat cryptic original account, as the exact distribution of letters is not easy to visualize: the text was “partie lignes circulaires et quadrangulaires, et partie semicirculaires,” opposed one against the other. These letters contained the whole of Psalm 67, and some key verses of 91, namely vv. 1, 11, and 13. Roughly, these verses read “He that dwelleth in the secret place of the Most High … . For he shall give his angels charge over thee … Thou shalt tread upon the lion and adder.” Le Frère is showing off a bit here, by telling the reader what the Hebrew text said: he was in fact a classic Renaissance Humanist, who was a celebrated linguist and an influential translator.

The reistre’s other bag contained small roots and bones (“petites racines et osselets”). Le Frère is condescending: “Perhaps he imagined that they would serve him as some kind of safeguard [preservatif] in war, of the kind that the Latins (like Pliny) call amuletum, or something of magic and Occult Philosophy.” As the historian condescendingly remarks, this was the sort of superstition that the occultist Cornelius Agrippa had used “to scramble the brains of so many Germans.” Agrippa’s hugely influential Three Books of Occult Philosophy had appeared in 1533.

Back to that amulet – and it is interesting that Le Frère presents that word as so foreign and new. The word does not enter regular English usage until around 1600. But amulets and talismans have been used very frequently throughout Jewish and Christian history, and have often used Biblical texts. The description offered here easily fits countless items that we know from various eras, particularly from the Egypt of Late Antiquity. Even the pattern of folding described has many precedents, for both Jewish and Christian objects.

So what are we dealing with here, at Poitiers in 1569? The first possibility, which is what Le Frère clearly believes, is that this is a sigil taken from Agrippa’s book. And yes, we can find plenty of symbols in that work that sort of fit the description. That is also true of the pseudo-Agrippan writings that were added to this corpus over the following decades. How the soldier might have obtained such an arcane intellectual treasure, we can only guess. 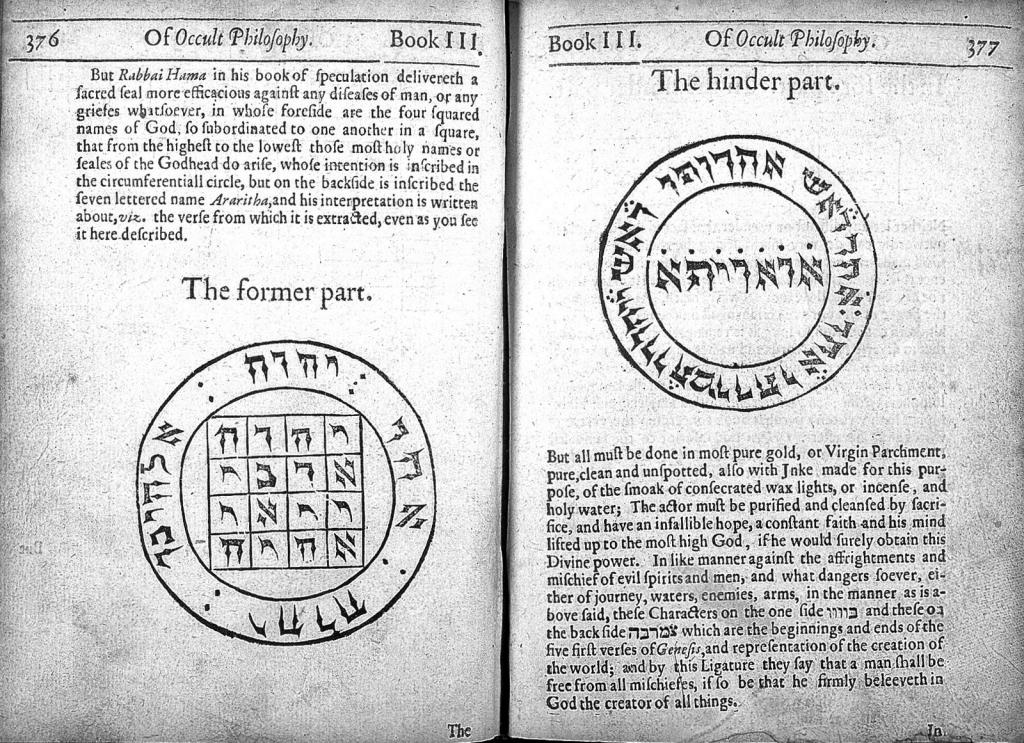 But the specific description of the Hebrew letters, together with the psalms used, actually makes me think that we are dealing here not with a Jewish-themed item taken at second hand from Agrippa, but rather something of direct Jewish manufacture. If so, then it finds a great many parallels throughout that well-researched esoteric tradition. That is especially true of the geometric rearrangement of the Hebrew text, which is so characteristic of “practical Qabala.” (Note the discussion here of squares, rectangles, and triangles). In one amulet designed to protect women in childbirth, we find what appears to be a meaningless jumble of letters, which in fact represents the first letters of each word in first nine verses of Psalm 91. At first sight just as nonsensical were the amulets that took 91 and the great proclamation of the Shema (Deuteronomy 6.4), which is so fundamental to Jewish life and practice, but which presented the words of each scripture alternated with the other.

Through the early modern period, Jewish communities in Central and Eastern Europe had a lively tradition of occult practice and demonic belief, which among other things included the use of 91 in exorcism. A sizable number of Jewish books and writings summarized mystical and magical teachings that claimed at least some foundation in Qabalistic literature. We get a sense of the scale of this activity from a much later text from the end of the eighteenth century, when many such products were translated into German and other languages, and these circulated very widely. One of the most popular was Sefer Shimmush Tehillim or Use of the Psalms, which was translated into German by Gottfried Selig, a Jewish convert to Christianity. That in turn set off a whole fashion for magical and Qabalistic texts in Christian Europe.

The choice of Psalm 67 is fascinating. This had special Qabalistc resonance, and was known as a Menorah Psalm, because of its arrangement of verses. “A Menorah Pattern occurs when there are 7 items in a 3 – 1 – 3 pattern. It is named after the Jewish menorah which has 7 candles.” For its powerful uses in Jewish practice, see this site for instance. I quote Shubert Speer, “The Menorah Psalm”:

In the Judaica collection of the Israel Museum there are several objects which display as one of their decorative elements a representation of a seven-branched menorah with the text of Psalm 67 laid out along its stem and branches. This is not unusual. Reproductions of the text of Psalm 67 in the form of a menorah were already popular in the 15th century and appear in prayer books and amulets of the 18th and 19th centuries.

The psalm is given special weight in the Zohar. In a sixteenth century context, the psalm was a mainstay of practical Qabala. 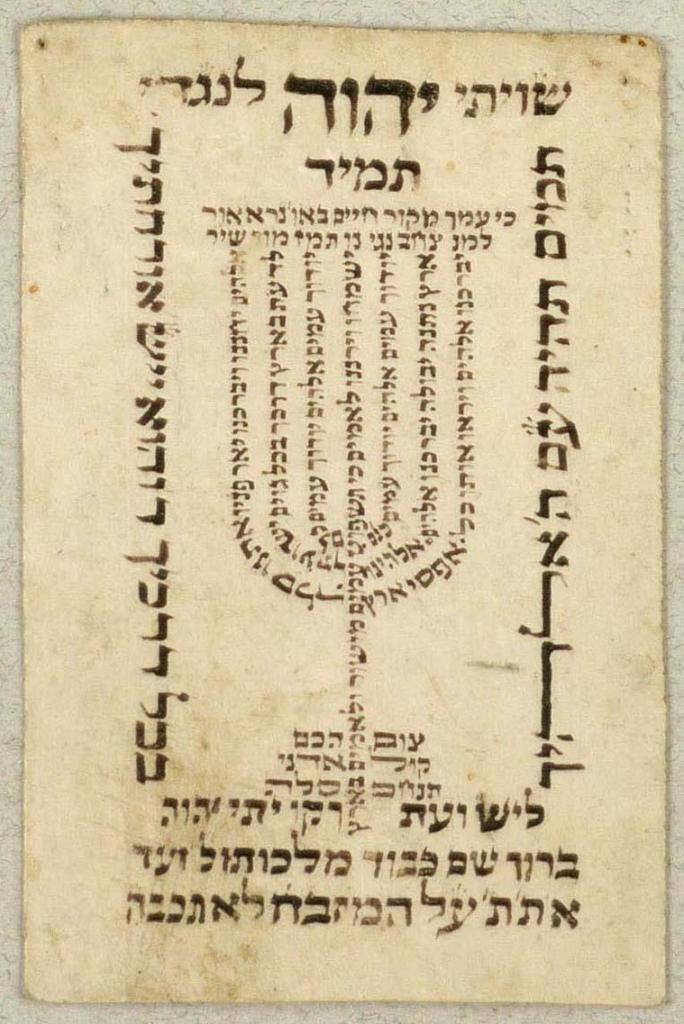 In the context of the 1560s, the reistre’s amulet is far more likely to be a Jewish and Qabalistic product, but again, we have not the slightest idea where this Protestant soldier obtained it. Did he venture into the Jewish quarter of one of Germany’s great cities that had not yet expelled its Jews, and seek out a rabbi or ritual specialist, a magician or Qabalist? Just where might that have occurred – Frankfurt, perhaps? Or, as often happened in later centuries, did a concerned woman venture on such an expedition, to buy something to protect a son or husband going into combat? We will never know. And why the Jewish source? Well, obviously in buying a charm to guard somebody’s life, you want the best, and authenticity counts. This is not any regular amulet, this comes with real Hebrew letters! That’s the good stuff.

Of course, that’s all speculation.

What I can say with confidence is just how vanishingly rare Le Frère’s reference is. We know a great deal about amulets from two sources. On occasion, we find examples of different kinds, especially if they survive in some hard medium like metal. Or, there is a sizable How To literature informing people about the manufacture and deployment, of amulets and talismans, and offering readers texts and spells they can copy for their own use. What is NOT readily available, at least before modern times, are strictly contemporary accounts of people actually using such objects, or carrying them about their person. “Consumer” accounts are very rare.

If we think about it, that is not too surprising in an era like the 1560s, when soldiers (for instance) desperately wanted protection, but were very nervous indeed about anything that could be attacked as occult, or associated with witchcraft. Besides the religious wars of the era, this very decade witnessed a massive upsurge in witchcraft accusations, with the attendant demonological literature. You would be very reluctant to chat about an amulet. Nor would it be a great defense to say that the thing had nothing to do with witches, but it was actually Jewish and Qabalistic. Good luck with that one…

In the particular instance at Poitiers, not only was an amulet found on a body, which might well have been a common occurrence, but there was someone on hand with enough Hebrew to understand and discuss it. Those circumstances were not likely to be reproduced easily.

When we think of the Christian wars of religion, it is intriguing to think of one soldier riding into battle with this (probably) Jewish item around his neck – something that a Jew had sold or given him to safeguard him in an internecine Christian conflict. Two thoughts arise from that fact. First, if that amulet actually turned up today, say in an attic, there is no earthly way we would guess at its actual ownership and association. You think it belonged to a Protestant cavalryman – seriously?

Second, I wonder how many of God’s other soldiers in those wars were similarly equipped? I’ll never look at the Dutch Revolt or the Thirty Years War in the same way again.

June 3, 2021
Pro-Life Christians Expect the Supreme Court to Save Unborn Lives, but Maybe Poverty Relief Would Be a Better Place to Start
Next Post

June 7, 2021 The Forgotten Baby Bust
Recent Comments
0 | Leave a Comment
"Except that their debates don't stay in house. Many "Evangelical" Southern Baptists have a political ..."
Liquidambar A Sinking Ship or Weathering the ..."
"The Southern Baptists were formed to support slavery"
AlabamaisChristianWhiteTrash Americans Should Be Comfortable with Historical ..."
"Megan Basham posted an article from essentially the opposite perspective over at Daily Wire. As ..."
NorrinRadd A Sinking Ship or Weathering the ..."
"While it's a public post, it is largely an "in-house" debate. Hopefully, no one gives ..."
NorrinRadd A Sinking Ship or Weathering the ..."
Browse Our Archives
get the latest from
Anxious Bench
Sign up for our newsletter
POPULAR AT PATHEOS Evangelical
1