In 1907, a Mennonite farmer and builder named Ezra King “got the Holy Ghost.” He had traveled in a horse-drawn carriage from his home in Hesston, Kansas, to Holiness Bible College in Hutchinson for some revival meetings. Soon after, he wrote in his diary, “I cleaned the stables and finished the garden fence. This eve to prayer meeting at C. Ruff’s. Thank God tonight after earnest seeking, and full consecration to God I received the Holy Ghost. Hallelujah.” This entry reflected thickening Mennonite connections with a burgeoning holiness movement in the Great Plains.

What did this mean for King’s peace position a decade later as the Great war loomed? Did he succumb to the Christian nationalism of American Pentecostalism? Though his descendants may have, King did not. He embodied what to our twenty-first-century eyes was a peculiar mix of fiery end-times theology and pacifism. He both yearned for visitations of the Holy Spirit and applied for a draft exemption. Consider the following diary entries:

Even during the entry of the United States into the Great War, King nurtured a still-strong Mennonite identity. Indeed, high numbers of conscientious objectors came from German and Russian Mennonite enclaves in south central Kansas. They understood the teachings of Jesus in the New Testament as precluding participation in the armed forces. Killing your pagan enemy, they believed, violates Christian standards of evangelism, and killing your Christian enemy violates Christian discipleship. Being Mennonite meant being a pacifist.

But for King—and many others in this era—being in the holiness movement also meant being a pacifist. As members of the Apostolic Faith in Bedford, Oregon, wrote in 1921, “It is our firm conviction, supported by the word of God, our consciences bearing us witness, that we cannot take up arms against our fellow man, however great the provocation or however just the cause might seem, it being the spirit of the gospel presented by Christ in His sermon on the mount.” A local Pentecostal soldier, drafted against his wishes, was quoted as “thanking God for having heard his prayer to be transferred from a machine gun company to the hospital service.” He said, “In that branch of service, I will not have to kill anyone.” Adherents of “Christian perfection” often quoted Matthew 5:48: “Be perfect, therefore, as your heavenly Father is Perfect.” Killing someone, they asserted, is an act of imperfection. 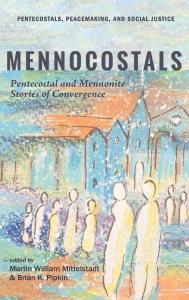 This convergence of the Anabaptist, holiness, and Pentecostal movements is the subject of a fascinating reflection by Jay Beaman entitled “Deconstructing My Life as a Mennocostal: What Has Los Angeles to Do with Kansas?” It’s part of a larger volume, itself entitled Mennocostals: Pentecostal and Mennonite Stories of Convergence. The volume demonstrates the many similarities of the two religious traditions. Both imagine themselves as somehow “set apart” from mainstream groups. Beaman remembers speaking in tongues as a child, healing fellow parishioners, and being greeted as “Brother Beaman.” His parents sent a note to the teacher explaining that young Jay “could not participate in square dance in class because it was against my religion.” The girls wore old-fashioned dresses, and families did not keep televisions. Mennonites similarly defied broader culture in their idiosyncratic dress styles and in their refusal to say the Pledge of Allegiance. As in the case Ezra King, many of these communities integrated. There were many Pentecostals in Mennonite congregations—and many Mennonites in Pentecostal congregations. Such convergences happened in Kansas, Iowa, Oregon, Pennsylvania, and elsewhere around the country.

What I love about Mennocostals is that it demonstrates how lived religion often defies established categories. Liberal and conservative—not to mention mainline, evangelical, and fundamentalist—are not inevitable and inviolable categories. It’s possible to be a Pentecostal social justice warrior or a tongues-speaking pacifist.

That’s true in Kansas, and it’s especially true in the many non-American and nonwhite cases discussed in this volume. César Garcia, the general secretary of Mennonite World Conference writes fluidly about “life in the spirit,” “a preferential option for the poor,” and “a new society characterized by forgiveness and reconciliation”—all in the same essay! Ryan Gladwin, a white theologian at Palm Beach Atlantic University, describes how his preaching style was shaped by a Colombian Brethren in Christ pastor “whose oratory style was more Pentecostal than Anabaptist.” Rick Waldrop, a career missionary with the Church of God (Cleveland) World Missions, whose essay is titled “My Journey to Anabaptist Progressive Pentecostalism through Experience of a Liberating Latin American Mission,” describes similar themes. He ends his essay proclaiming “the great possibility of the emergence of the mighty streams of dynamic pentecostal spirituality and counter-cultural Anabaptist peace witness moving together as a great river flowing with justice for the oppressed.”

It’s a beautiful vision. But for all the hope represented in these essays of Pentecostals and Mennonites reinforcing the best of their respective traditions, it’s hard to escape the historical reality that peace is usually a casualty of these encounters. The holiness movement—like the Pentecostals and the Disciples of Christ—lost its pacifist leanings. Though his bridge-building company, King Construction, became very large—and constructed the first buildings of the Mennonite Hesston College—Ezra King moved ecclesiastically in another direction, joining a Nazarene church. His son became a soldier in WWII. Indeed, nearly all Mennonites touched by the holiness movement—like most in the Missionary Church and some in the Brethren in Christ—eventually lost their pacifism. Nevertheless, the contributors to this volume insist on pressing ahead in their efforts to bring Anabaptists and Pentecostals together as “scandalous partners in protest.”

June 1, 2021
The Calling of the Christian College
Next Post

June 3, 2021 Pro-Life Christians Expect the Supreme Court to Save Unborn Lives, but Maybe Poverty Relief Would Be a Better Place to Start
Recent Comments
0 | Leave a Comment
"Thanks David for this article. Helpful reminder of the consequences of sanitizing our history.Jonah"
Jonah Langenderfer Innocent Readings of Evangelical History
"One might look at the state of Judaism in the US as an example of ..."
kdar14 What if the Nones Really Do ..."
"What is the difference between a Campus organization that is a hate-group against the LGTBQ+ ..."
Harvey James Johnson The University of Iowa’s Losing Fight ..."
"Kind of disappointing all the way around. For starters what we do not need is ..."
Mark Ross DeFazio What Evangelicals Just Don’t Know About ..."
Browse Our Archives
get the latest from
Anxious Bench
Sign up for our newsletter
POPULAR AT PATHEOS Evangelical
1