Religion and the American Revolution

Kate Carté is Associate Professor of History at Southern Methodist University. She’s here to discuss her

JT: I think many of us are used to thinking that religion in the colonies that became the United States was very different than religion across the pond. And it was in many respects. But you argue that New England, Virginia, old England, and Jamaica all participated in shared structures and networks that you label “imperial protestantism.” Could you explain that concept for us?

KC: That’s a great question. It’s not just that we’re used to thinking about religion on the two sides of the pond as different, we’re also used to thinking of it as regionally different within the colonies—New England is remembered as pious, the South less so. But when I was looking at the sources, I was struck by how many real similarities there were in all those places. The same denominations were dominant in all those places, with roughly the same structures of toleration (though different groups were in power in each). In addition, religious leaders in all those places actively corresponded with each other, and the transatlantic correspondence within their religious communities was quite robust. On the other hand, there really weren’t many consciously “American” religious structures before the Revolution. The more I looked at it, the more powerful the British Empire became in determining the basic shape of Protestant institutional life across most of the empire.

JT: How did imperial Protestantism shape the ways that American religious leaders responded to the political developments of the mid-1760s and early 1770s?

KC: Most religious leaders in the dominant denominations — Anglicans, Presbyterians, and Congregationalists — benefited from the empire’s support of legitimate religion, they were cautious about rebellion. In addition, most of them genuinely believed, after a century of warfare with Catholics powers, that the British empire was the best protection for “true religion” against the threats of popery and Catholic tyranny. All these factors made them cautious when the revolutionary crises came.  In New England, where the population was fairly unified in resistance to Parliament, religious leaders worked hard to understand precisely when and how resistance was just. Historian James Byrd’s book, Sacred Scripture, Sacred War, does a great job of exploring this topic. But religious leaders also worried about disorder and danger, and many (especially members of the Church of England) felt that the Revolution, especially after the Declaration of Independence, was the wrong course of action. When we look at religion and the Revolution, we need to keep all these different groups in mind.

JT: With the onset of the war and the creation of a new nation, the newly independent states no longer existed within this framework of imperial Protestantism? How did that reshape American religion and the relationship between churches and the state?

KC: There were two significant changes.  The first change was that states had to decide for themselves what the boundaries of legitimate religion were. In the colonial era, the imperial government ensured a rough toleration between dominant groups, and let those parties within particular colonies fight it out to some extent. After the Revolution, those outside restraints disappeared, and in many places Americans found they had no good answer to which religions, or what kinds of religion, were legitimate, or worthy of toleration. The easiest path forward was increased religious freedom for most.

The second change from the end of imperial Protestantism was largely symbolic, but very important.  The British empire was explicitly Protestant. People talked about the “Constitution in Church and State.” By law, the sovereign had to be Protestant. The federal government in the US had (and has) no such symbolic connections to religion. That change forced Americans to find new ways to express religious patriotism.

JT: Toward the end of your book, you note that although some Americans in the immediate wake of the Revolution (such as Ezra Stiles) referred to their new country as a “protestant zion” or “Christian nation,” there “was no institutional proof that it was so.” When I look at the United States of the nineteenth century, I see a Protestant nation. I see non-Protestant minorities suffering persecution, and I see the U.S. government taking actions that don’t seem all that far afield from “imperial protestantism,” from boarding schools for Native children to schools and missions in the Philippines. (I’m pushing into the early twentieth century). Am I wrong?

KC: That’s such an important point!  There are many great examples, including what you cite, for ways that Protestants, and Protestantism became powerful forces in the US. But the ways that Protestants did so after the Revolution were different than the ways that those same goals had been accomplished in the earlier era, and those differences matter. Instead of established churches having a default role in public life, leaders of religious institutions—and individuals speaking on behalf of their faith in a political realm—had to build new structures, laws, and languages to infuse a secular state with religious goals. But we should not see that process as a simple or automatic successor from the colonial era. It resulted from active political choices in the nineteenth century and beyond.

JT: It’s been more than half a century since Alan Heimert published Religion and the American Mind, in which he argued that evangelical preaching and revivals did much to spark the rebellion. Generations of historians have dismissed, affirmed, and advanced that argument. What do you make of those debates?

KC: What a great question!  Heimert’s been on my mind these days, thanks to some great conversations with historian John Fea. To be honest, I don’t see any particular link between the awakening movement and the American Revolution, because, as I argue, leaders of the awakening movement were very active within imperial Protestantism. John Wesley, the founder of Methodism, was one of the most effective polemicists for the British Parliament during the mid-1770s. When we look at the awakening movement in a transatlantic way (as the participants in the movement did in the colonial period), its hard to tie the awakening and the Revolution together closely. I think Heimert’s work was very important and generative in its day, but it doesn’t reflect the transatlantic understanding of the Revolution that I’m working with.

JT: You eschew the term “evangelical” and instead talk about figures like George Whitefield and John Wesley as awakened protestants. What’s wrong with calling them evangelicals?

KC: You raise a great issue here!  I really struggled with what term to use. I landed on “awakened” when I was finishing an article a few years ago, and I wrote about the process here. The short answer is that I think the discontinuities in the history of the community that has generally been lumped into the term “evangelical” are far greater than the continuities. As a result, the term has become really confusing for students and readers.

For my period, “awakened” works as a contemporary term. I hope that as the scholarship on the people formerly known as evangelicals evolves, we develop a better list of key turning points and discontinuities in that history. I certainly see the American Revolution as just such a moment.

JT: Thanks, Kate. I will always remember your phrase “people formerly known as evangelicals!” 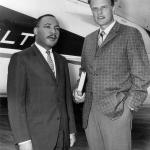 July 7, 2021
Is There a Theological Reason for White Evangelical Racism?
Next Post

July 9, 2021 What if the Nones Really Do Herald the Decline of Religion?
Recent Comments
0 | Leave a Comment
Browse Our Archives
Related posts from Anxious Bench

The Sargent Exhibit at the National Gallery-- Part...
...
view all Evangelical blogs
What Are Your Thoughts?leave a comment