The Role of Women in Pentecostalism

Today I’m delighted to welcome Dr. Joy E. A. Qualls to the Bench. A nationally recognized writer and speaker, Joy currently serves as Associate Professor of Communication Studies and Associate Dean of the School of Fine Arts and Communication at Biola University. She is the author of God Forgive Us for Being Women: Rhetoric, Theology, and the Pentecostal Tradition (Pickwick, 2018).

I am a fourth generation Pentecostal who was raised on the rural plains of North Dakota. The tiny Assemblies of God church was my home, almost as much as our house.  Nearly every family was a blood relative and the rhythm of our life centered around the church.  If the doors were open we were there and if we were not somewhere else, it was because we viewed those things as out of bounds or less than our life in and among the people of God. In those days, there were more churches than bars in our little community and while it was never spoken out loud, we also knew, instinctively, that we were the real Christians and our piety as well as our devotion demonstrated it.

As a child, I can distinctly remember a photograph of a woman that hung on the back wall of the church foyer. Her last name was not the same as our family so I knew she was not related. Yet, there she was, a prominent figure who must have meant something to us to hold such a distinguished place of honor in the holiest of places in our lives.At some point, I would learn her name was Blanche Britton, but it was not until I was an adult that I learned who she really was and why she was so important. Blanche Britton was the woman who planted our church.  She would plant 25 others over 26 years across the North Dakota plains in the early years of the 20th century.

Women have a complicated relationship with Pentecostalism and pastoral ministry. Often lauded by leaders and lay persons alike, women were integral to the modern Pentecostal movement and their influence cannot be denied. While the number of women adherents in Pentecostalism remained strong, as the movement institutionalized women’s influence, leadership, and roles became increasingly constrained. Some, like the Assemblies of God would eventually create space for women to serve in all capacities in the church, would still only see 25% of their credentialed ministers be women into the 21st century (a similar percentage to the numbers in the earliest days of the fellowship). Others such as the Church of God (Cleveland, TN) would allow women to hold pastoral office, but restrict the role of Bishop (and voting rights in their polity) to men.  Still others would restrict women’s roles in ways that would reflect a more Baptist or Reformed view of theology than that of gender lines washed away in the Spirit from the early days of the movement.

As a Pentecostal woman, scholar, and adherent in the Assemblies of God, I wanted to understand how women like Blanche Britton could pioneer a movement in an age not friendly to women’s autonomy, leave their unbelieving husbands to plant churches, and be so revered in the annals of our history. Yet, the young women in my University classes who believed themselves called to ministry often abandoned their callings because they found little to no opportunity, even less mentorship, and few examples of women beyond the ghosts of ages gone by doing what they were called to do.

I wanted to know more and to understand how we could herald Pentecostalism as this movement of the marginalized, proclaim Joel 2 and Galatians 3:28 as our banners of an egalitarian Spirit made manifest in this world, while not living out our own creeds in our churches. What resulted was my book, God Forgive Us for Being Women.  As a rhetorician, I was convinced that the tensions between what we say we believe and the way it plays out in reality was rooted in how we talk about things.  While there is much that is incomplete in this work (for example, I do not sufficiently address the experience or rhetoric surrounding women of color, specifically black women who were first among the movement’s leaders), it is a place where my suspicions were confirmed.  The constraints placed on women in Pentecostalism had more to do with the influence of Evangelical culture, lack of education in our history and theology, and general discourse than it did in the Scripture or theological positions. 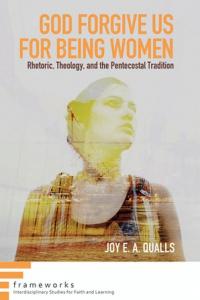 As my sisters and colleagues, Kristen Kobes DuMez and Beth Allison Barr, have so eloquently argued in their own works, women in Pentecostal circles have also been impacted by an unhealthy masculinity, the Christian industrial complex, and reactionary approaches to feminism than they have been restricted by their own theology or properly exegeted Scripture. Our desire as Pentecostals to no longer be the religious movement from the other side of the tracks has resulted in a diminishing of those very distinctives that resulted from a great Spiritual awakening and launched a religious transformation.

Blanche Britton was a pioneering church planter not because the culture or religious establishment granted her permission or agency. Blanche Britton acted out of a sense of urgency to fulfill the great commission and prevent those living in the Great Plains from leaving this world without a saving knowledge of Jesus Christ and the person and the work of the Holy Spirit.  It is out of this same conviction that I engage my own work and calling to write, teach, and serve the local church. As a scholar, I am committed to telling the story of Pentecostal women, like Pastor Britton, and engaging in critical evaluation of the rhetorical constraints that have taken hold over the course of the last century.

How we talk about things matters. My children are fifth generation Pentecostals who are each uniquely gifted and called by a God who sees and loves them as a young man and a young woman. My students are coming up in a religious culture they are more likely to leave than to believe they can influence. As long as young women leaders in my own fellowship are told that they are only given space because the men have abdicated their divine roles as leaders, we still have work to do.

In the Assemblies of God, we now have several women who serve on our Executive Leadership Team, the Executive and General Presbytery, and in network roles, but in the local church still face intense barriers to their ministry. In our sister denominations, the limitations and scrutiny of women as leaders are more intense.  It is my purpose here to share the stories of Pentecostal women with the readers of The Anxious Bench and to provide insight into both the opportunities and constraints women in our ranks face. It is a story drenched in the Spirit, one of called, empowered, and bold women who despite a multitude of constraints continue to seek one thing: walk in obedience to the God of the Universe and make known his son, Jesus.

September 8, 2021
When the Empire Doesn’t Strike Back, but Leaves Instead: Ethical Questions from the Roman Empire for the US Departure from Afghanistan
Next Post

September 10, 2021 Teaching the Cold War Through Songs and Music
Recent Comments
0 | Leave a Comment
"What does this have to do with patriarchy?"
Roger McKinney Down with the Patriarchy! Remembering the ..."
"Remind us. How is the mental health of females effected when their role is determined ..."
the old scribe Down with the Patriarchy! Remembering the ..."
"Thank you but his is not other historians'. God bless you and your house with ..."
Herrnhut Jesus, Genocide, and the Canaanites
"Sorry, but after reading this response to the book, I'm confused as to just what ..."
A Distant Mirror Jesus and John Wayne: A Guide ..."
Browse Our Archives
Related posts from Anxious Bench