The Redemption of Redeeming Love: A Movie Review and Marketplace History 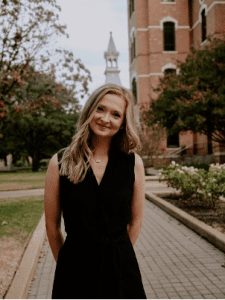 Today’s guest post is by Emma Fenske. Emma is a current MA student and incoming PhD student in the history department at Baylor University. She studies conservative evangelical women and their thoughts and theology through Christian historical fiction romance novels during the rise of Billy Graham and the Christian Right. By analyzing this genre of evangelical print media consumer culture, she hope to bring to light the ideas and theologies that answer the question “Who is an Evangelical?” from the perspective of everyday women whose voices are often left within the home. 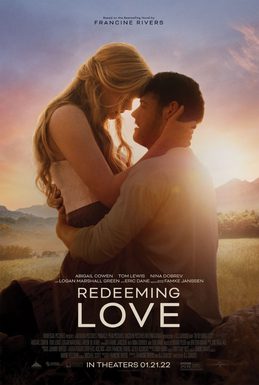 When I heard about the upcoming release of the Redeeming Love movie, I was overjoyed. For the past year, I have studied conservative neo-evangelical women’s thoughts and theologies through Christian historical fiction romance novels, and I eagerly anticipated the new marketplace responses.

And let me tell you, the reviews do not disappoint.

Christian romance novels have always baffled critics. With kitschy plots, overly intense themes, overly beautiful characters, and happy endings, Christian romance novels have been relegated to the sidelines of intellectual thought. But without fail, every time a new film adaptation is released, reviewers are once again shocked with the popularity of Christian fiction romance. The 2022 release of Redeeming Love, adapted from Francine River’s novel of the same name, is no exception. With incredibly high audience success (95% audience rating on Rotten Tomatoes with 500+ reviews) and incredibly low critic response, (12% Tomatometer on Rotten Tomato), there is a clear disparity in consumer and critic perception of the film.

Honestly, if you are having a bad day, read through reviews of Redeeming Love. Here are a few personal favorites:

With reviews ranging from an immediate classic and must-see movie to a community theatre production whose viewers are entitled to compensation, Redeeming Love has baffled reviewers. Confusion does not fall on the gender line, or even in the separation between sacred and secular.

Rather, the clearest separation between positive and negative responses to the movie lies in the insider understanding of the novel and its audience.  Which raises the questions, who is the intended audience, and what are the themes that baffle critics?

History of the Christian Romance Marketplace

While Christian fiction romance novels are not a new phenomenon, the current version of evangelical romance begins with the rise of neo-evangelicals in the 1960s and the rise of Billy Graham. Authors like Eugenia Price (1965) and Catherine Marshall navigated the rise of the evangelical print media, establishing a place for women in public leadership through the marketplace. Catherine Marshall’s Christy (1967) offered a deep story of faith and culture in Appalachia for its evangelical audience, and the book spent thirty-eight weeks on the New York Times bestseller list.

While notable, a separate marketplace of Christian romance did not truly occur until the 1980s, due to an increase in explicit sexuality in the romance novel market (Dell’s book line Ecstasy, Harlequin’s Temptation, Silhouette’s Desire). Christian Female readers revolted, writing letters to Christian publishers asking for Christian romance novels with less sexuality (Zondervan, Thomas Nelson, Bethany House, Multnomah). [8] An outcome of this cry was Janette Oke’s popular series Love Comes Softly (1979) and Beverly Lewis’s The Shunning (1997), both of which were discovered by editor Carol Johnson (Bethany House). 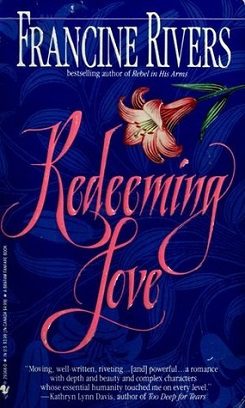 What story is the Redeeming Love movie telling?

Redeeming Love (2022) opens with William Shakespeare’s phrase, “All that glitters is not gold,” and pans (pun intended) to a group of dirty prospectors searching for gold in the California Gold Rush (1835-1855). This contrast between glitter and gold is a symbolic theme throughout the rest of the film carefully adapted from Rivers’ novel. Based on the book of Hosea, this film tells the story of Angel, a prostitute in Pair-a-Dice, who finds the redeeming love of God through Michael Hosea, a Christian farmer who was told by God to marry Angel.

The movie does not shy away from the difficult themes within the novel, nor does it hesitate to offer graphic visuals. Addressing abuse, prostitution, infidelity, rape, incest, child molestation, grooming, murder, sex, and abortion within the film, Redeeming Love is incredibly deserving of its PG-13 rating.

But no one who read the novel should be surprised.

In fact, Francine River’s novel is much more sexually explicit (the 1997 “redeemed” version, let alone the original 1991 version). Michael Hosea became a much softer character in the movie version: less likely to have angry or violent fits, force Angel to follow his will, or bring her to his home without her consent. (The scene where he takes Angel to see the sunrise is Michael forcibly ripping a naked and scared Angel out of bed without her consent. Likewise, the chasing scenes when she leaves are not sweet, more frequent, and with less choice to return on Angel’s part.) The sex scenes are also remarkably toned down and less frequent. (While Angel’s apparent orgasm may seem graphic in the movie, in the book, Michael forces Angel to call his name repeatedly during the first time they have sex. When Angel refuses, he loses his temper.) Angel’s overabundant misery is decreased in the film version, leaving out instances of Angel’s abuse by various people (including being abandoned by her nanny as the nanny goes off and has sex).

While Christianity is at the center of the film, as it is based on the book of Hosea, this has also been toned down in the film. Conversion experiences are replaced with religious symbols like crosses and church buildings, and redemptive salvation becomes the pursuit of belief.

What Does This Mean

Redeeming Love should be jarring.

The graphic themes and sexuality reasonably shock critics who struggle to understand both the themes and the intended audience. But after looking at the long history of the Christian romance marketplace, the high audience ratings should also not be surprising. As a toned-down version of mommy-porn, Redeeming Love offers a “cleaner” version of well-loved romance novels to its female audience.

But while Redeeming Love addresses some difficult themes in women’s lives and offers the hope of redemption to all, it does brush some problematic behaviors under the rug. Its Biblical tie-in can lead to problematic conclusions about abuse and consent that should not exist in understandings of marriage, or, more importantly, in pictures of God’s redeeming love. Portraying Michael Hosea in a God-like role allows a man with sexual desires and a temper to be seen as a redeemer of a fallen woman: a broken man whose actions stand above reproach or correction.

I am not quite sure that redemption has saved Redeeming Love.

March 23, 2022
Islam and the Borderland of Empires
Next Post

March 25, 2022 The Ukraine War: Three Thoughts
Recent Comments
0 | Leave a Comment
"Your master Satan gave that to you and from what I can see of your ..."
D.M.S. The Future of Catholic Universities
"Although (obviously!) not part of Christianity, I think the whole M*slim thing about images of ..."
Mo Fin Iconoclasts I Have Known, and Even ..."
"You come up with the most fascinating research projects and you always deal with them ..."
GEVeith Iconoclasts I Have Known, and Even ..."
"I think the ESV originated as a conservative alternative to the NRSV, but eventually marketing ..."
NorrinRadd The Gender Inclusive Bible Debate (Medieval ..."
Browse Our Archives
Related posts from Anxious Bench