A couple of my long-standing interests recently came together in a very unhappy way. My current book project concerns the Byzantine iconoclasm crisis, and (by means of the icon connection) that speaks to my enthusiasm for Russia and its historic culture and faith. At the same time, I am devastated by the critical struggle currently under way in Ukraine, where Putin’s vicious aggression is aided and abetted by his trained chimpanzees in the Moscow Patriarchate. That church’s prelates have become dependable sources of shrieking militarism, and ethnic nationalist propaganda of the ugliest kind. I forget who it was said that the Russian church knows how to do only one thing well, which is to serve as chaplain to the Tsar – any Tsar. If you still have a vestige of respect for the Orthodox Church hierarchy in Russia (as opposed to the Diaspora) you have not been following the news.

The two themes I mention came together not long after the invasion when that warped and failed church began bestowing holy symbols on invading forces to offer them support and comfort. This included a supposed relic of the True Cross, which was lost when the Ukrainians launched the brilliant assault that sank the cruiser Moskva, and that precious relic presumably lies at the bottom of the Black Sea. Around the same time, the head of Russia’s National Guard was volubly grateful for the patriarch’s gift of an icon which would, he agreed, protect the Russian army in its efforts. (Ukrainians, we recall, are also predominantly Orthodox).

From a Western gaze, this whole story looks absolutely medieval, and not in any good way. But it does point to the central role of icons in the making of Russian religion, and in Orthodoxy more generally. We could quite feasibly write a history of that Orthodox heritage through its icons, and the devotion they have inspired, and that allows us to see how they are being abused today. To illustrate this, I will focus here not on icons, but on two paintings about icons. Together, they help us explain just what the modern-day Moscow establishment is seeking to recreate, and to justify.

Some icons in particular have been deeply venerated, and have been widely reproduced. The most famous include the twelfth century Virgin of Vladimir, or Novgorod’s Znа́meniye, Our Lady of the Sign. Historic icons accumulated a large body of legends associated with miracles and healings. Often, tales are told of the origin or acquisition of the icons, so that we hear how they were “discovered” through some supernatural intervention. The fifteenth century Virgin of Kazan was rediscovered following a fire in 1579, under the direction of the Virgin herself, who appeared to a little girl. Among its many later stories, that image of Kazan was reputedly responsible for saving Moscow from Polish invaders in 1612.

A similar fame attaches to the makers of icons. Andrei Rublev is commonly regarded as the greatest of Russia’s icon painters, and the most influential on later generations. He was duly canonized as Andrei the Iconographer.  In 1966, Soviet film director Andrei Tarkovsky released his Andrei Rublev, a sprawling epic loosely based on the painter’s life and work. A solid critical consensus regards the film simply as one of the greatest ever made, in any language, and one of the very finest cinematic explorations of faith, and of artistic creation.

Icons were central to the Orthodox revival of the nineteenth century, and feature often in the writings of Fyodor Dostoevsky. One widely reproduced depiction of Tsarist Russia is the painting by Ilya Repin usually known as “The Religious Procession in Kursk Governorate,” which dates from the 1880s. (Repin, by the way, was born in Ukraine, in what is now Kharkiv Oblast). 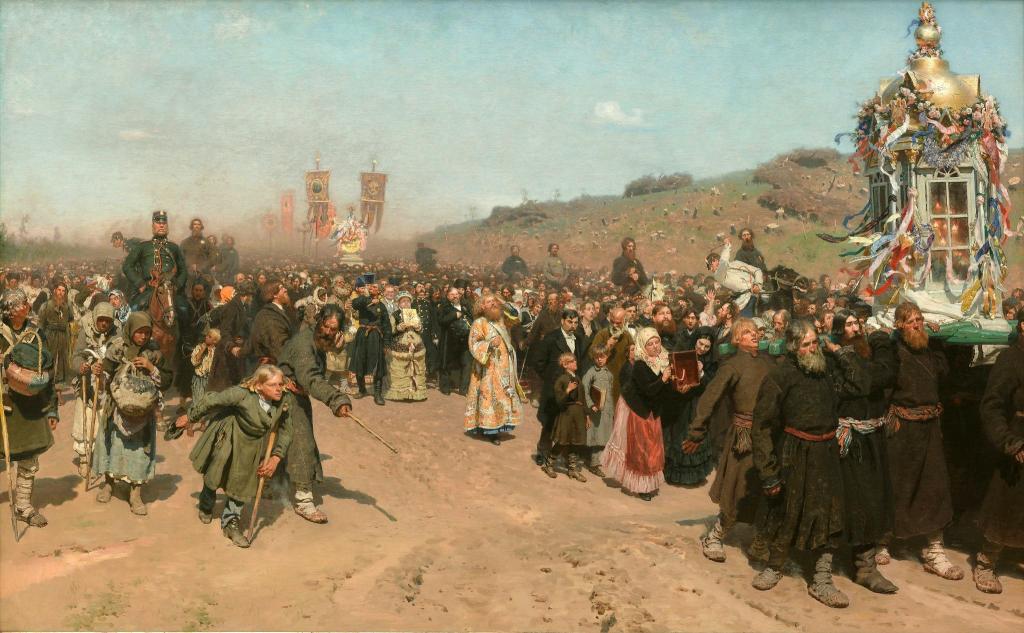 The picture shows a teeming gathering of all classes as they accompany the transfer of the famous icon of Our Lady of Kursk, and other lesser icons and holy images are much in evidence among the crowd and the clergy. Repin’s picture is commonly used as a symbol of the old Russia and its faith through the centuries. Among other things, the painting precisely captures the close connection between icons and the larger Christian community, expressed through processions and pilgrimages. Icons are to be surrounded by incense, by holy water and oil, and accompanied by hymns and chants. Icons were never meant to be static, and still less consigned to sterile art galleries.

If you want to understand Orthodoxy as lived experience, this picture repays careful study.

Icons also have a long history of military use, as the symbols of a God-fearing Orthodox land and sovereign at war with its (preferably pagan or Muslim) foe. Not long after Repin’s Kursk painting, Vasily Kurikov produced his scarcely less famous depiction of “Yermak’s Conquest of Siberia,” in which Christian armies advance Russia’s manifest destiny to the east. Each of their many battle-flags contains icon-derived portraits of holy figures, those of Christ and St. George being most obvious.

If you want to understand Russian Orthodoxy as political and military manifesto, this picture likewise rewards study.

Some famous icons have been associated with legends of miraculous battlefield appearances. The First World War produced the tale of Augustów (1914), when Russian forces won a historic victory over the Germans. They owed that success to an appearance of the Virgin and Child, in an often-cited miracle that inevitably was reproduced in icons of the Theotokos Augustovskaya. It was an icon of this scene that the head of the National Guard received a couple of months ago, as a token of Church approval for the iniquitous operation against Ukraine.

I continue to love the monuments of Russia’s Orthodox culture: the icons in their teeming profusion, Dostoevsky and Solovyov, The Way of a Pilgrim, Ivan Kramskoi’s painting of Christ in the Desert, Rachmaninoff’s All Night Vigil. So much of the Classical music I listen to regularly is Russian, if not directly associated with the Orthodox church. I am also painfully aware that the present day church is passing through a hideous Dark Age of spiritual corruption, and the inversion of all standards of human decency, to say nothing of Christian values and virtues. Like the larger Russian state, of which it is a microcosm, the church faces the kind of situation that was famously imagined by Antonio Gramsci: “The crisis consists precisely in the fact that the old is dying and the new cannot be born; in this interregnum a great variety of morbid symptoms appear.” Think of the current Moscow Patriarchate as a morbid symptom.

May the nightmare end soon.

Meanwhile, on the right side of history…

Ordinary Ukrainians have responded to all this with their own very popular icon of Our Lady of the Javelin Missile, the Virgin of Fire and Forget. Follow this link for a picture – I can’t find a public domain image easily. Also check out all the related merchandise available here. I do stress the popular and secular origins – this is not the product of an institutional church or hierarchy creating images in support of its cause, as in the case of Moscow’s sanctified fascism.

The Javelin  image began as sort of a parody, but maybe she really will attract ever more faith as the years go by. This is a serious debate. Ukraine’s church authorities just about tolerate the joky meme of Virgin-plus-rocket-launcher, but they get very nervous when she is given a halo to suggest she is a real icon figure. However hard they try to suppress that halo, it keeps coming back.

June 30, 2022
From the Russian Empire to the Cold War, and Back Again
Next Post