In 2005, I entered Notre Dame as a wide-eyed young PhD student to study the history of religion in American higher education. Notre Dame was at that time distinguished by having two scholars of such a specific topic: George Marsden had published The Soul of the American University: From Protestant Establishment to Established Nonbelief in 1994 and Jim Turner had published The Sacred and The Secular University (with Jon Roberts) in 2000. (Notre Dame also had an exceptional women’s and gender historian, Gail Bederman, who completed the trifecta that would allow me to study the intersection of religion and gender in American higher education.)

Sixteen years later, my dream of being part of the discussion has come true—and the questions have remained so relevant that Marsden released an updated version, The Soul of the American University Revisited: From Protestant to Postsecular (2021). 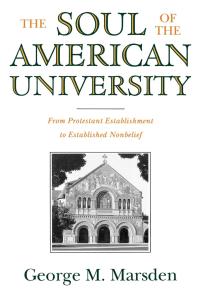 But when Marsden first published Soul twenty-eight years ago, I was a freshman in high school. Unbeknownst to my younger self, my subsequent high school and college years would be an extraordinarily productive decade of reexamining the history of religion’s role in American higher education. While a host of authors wrote book-length treatments of this subject, The Soul of the American University arguably made the biggest splash at the time and has had one of the largest ripple effects as well.

Soul articulated a historical explanation for the “secularization” of the academy—and in a postscript, a controversial program for creating a more robustly pluralistic modern academy in which religious viewpoints would have a seat at the table, but not control of the discussion. Marsden believed secularization had been a gain in many ways—it allowed for more participants in higher education, for example—but a loss in others. The loss he highlighted was that no consensus had emerged as to what would replace the ousted broad Protestantism as a moral underpinning for higher education.

Marsden focused on the effects of the tension between the religious origins of most American colleges and the understanding that colleges should serve the entire public, that is, students from a variety of faiths—if not always races, sexes, and class backgrounds, I would add. Navigating these two realities led higher educational leaders to insist that their theological position, and hence their educational institution, was what truly constituted being “nonsectarian,” which was the goal that fused religious purpose and public good in this style of thinking.

Marsden noted that this historical approach was not pluralism; it was more like imperialistic blandness, declaring your own approach sufficiently broad to cover every one. Anyone who disagreed was either overly narrow on one side or heretical on the other. And he blamed people from his own religious tradition—Reformed Protestantism—for pioneering this approach. In the mid-nineteenth century, broad-minded evangelical college leaders made this sort of nonsectarian argument against smaller denominational schools. Then, at the turn of the twentieth century, more liberal Christian scholars used it to take power from the evangelicals. Later in the twentieth century, secular scholars in turn used it against liberal Christians.

To piece together the story of what happened, Marsden sought his answers at the top, which is to say he gave pride of place to the religious and philosophical convictions of college and university administrators, who he believed had the power to set the trajectory of their institutions. He thus spent less time on factors like admission patterns or student life. Marsden also focused on the prestigious institutions at the top—the “usual suspects” in the history of American higher education, or what administrators now call “aspirational peers,” namely those institutions that set the parameters for what constituted prestige in American higher education.

To be fair, selectivity is necessary to tell a coherent story over a large span of time, and the book’s extensive chronological scope is one of its strengths. Still, this focus on famous, trend-setting institutions, particularly those that would become research universities, necessarily constrained the story he told. While Marsden paid some attention to issues of class and financial access to education, The Soul of the American University said very little about how the educational aspirations and increasing educational access of women and people of color fit into his narrative. 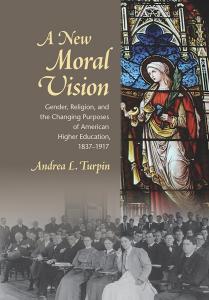 As should surprise no one familiar with my work, I advocate using both intellectual and social history to analyze the changing role of religion in American higher education—which is to say weaving race, class, or gender as a significant variable throughout the narrative. What I found by zeroing in on the factor of gender is that college and university leaders sought to enhance their institutions’ national reputation not merely by downplaying their denominational, or even broadly evangelical identity, but also by playing up how they contributed to the national good by educating men, women, or both for unique social contributions tied to the sex of the students the institution served. This shift opened up some doors for students but closed others.

So arguments about the nature of moral knowledge or the way to transmit morality to undergraduates did not take place in a disembodied void. It mattered who was doing the thinking and the learning at these institutions and who they did and did not envision as their conversation partners.

So I was delighted that Marsden decided to write an updated version and was intrigued to see how more recent scholarship on these sorts of questions would influence it. First of all, let’s get this on the table: I completely own up to running a search in the revised edition for references to my own work. They’re in there! Which is to say, Marsden did not only add new material at the end to bring the story up to the present; he also worked in subsequent scholarship to the way he told the narrative in earlier years. Which is quite impressive. (My research on the topic, for example, spans the 1830s through the 1920s.) 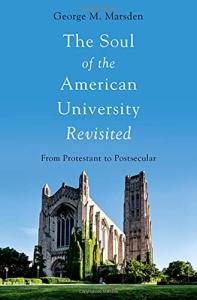 But my favorite chapter was one of the two new ones: “The Twenty-First-Century Postsecular University.” It reminded me of why I have always so appreciated Marsden’s work: it is written with such graciousness and precision. In this chapter, he grapples with the implications of contemporary pluralism, both its intellectual and social versions.

First, Marsden surveys the recent “crisis” literature on the state of American higher education. Now, as Marsden knows, literally every generation has been convinced that American higher education is in a state of crisis. That said, we all do well to pay attention to the nature of our current crisis, which I believe Marsden articulates well: “…universities are driven even more than ever by economic interests….[they] subordinate the humanities and concerns for what it means to be human” (351-352). The loss of a coherent religious framework to provide a common moral purpose was originally replaced by the humanities in the early twentieth century, but now, he notes, with the humanities receding it is replaced by a sole remaining moral commitment to diversity.

And here we have something I really appreciate about Marsden’s careful thought: he is not telling an unnuanced declension narrative. He specifies that this new moral framework is beneficial is some ways, just as it is harmful in others—exactly the same analysis he gave of previous evangelical and liberal Protestant and secular humanities-centered attempts to provide a unifying moral vision for American higher education.

The strength of a commitment to diversity is multifold. Even at institutions that are mostly concerned with setting students up for economic success, this commitment at least works to grant this opportunity to more people. Diversity as a framework also lends itself to the very sort of ideological pluralism that Marsden called for in the first edition of Soul, namely the opportunity for explicit faith perspectives to have a seat at the table of scholarly conversation. Plus, a commitment to ideological and social diversity is necessary for a modern democracy to succeed, so a worthy mindset in which to train students.

As someone who is also strongly committed to all these types of diversity in higher education, I likewise appreciated and was challenged by Marsden’s analysis of their potential pitfalls. In short, humans are naturally tribal creatures and if universities make the one moral value diversity without a concurrent attempt to provide some sort of unifying vision of the good, we are all rather likely to retreat into our subcultures and to perceive other groups distrustfully. Marsden therefore joins contemporary commentators calling for some modern version of Martin Luther King, Jr.’s beloved community.

He realizes the challenges: what is outside the pale? When ought a campus to exclude a student group or an intellectual perspective for being insufficiently tolerant and when is that itself intolerance? It’s actually not an easy question; all readers of this post would probably agree that some things ought to be excluded, but we would likely disagree on where the line is.

And do Christian colleges and universities have anything unique to add to this conversation or do they represent a retreat away from pluralism? Marsden’s other new chapter sparked some thoughts on these questions, so stay tuned for the second half of these reflections next month!

With permission, this post is adapted from my contribution to a roundtable on The Soul of the American University Revisited that will be published in a future issue of the journal Fides et Historia.

October 25, 2022
In Search of an Evangelical Political Theology
Next Post

October 27, 2022 The Great Vampire War of the Enlightenment
Recent Comments
0 | Leave a Comment
"As long as they keep strictly to God/Jesus 66 books of scripture."
D.M.S. A Very Not-So-Merry Christmas: How Protestantism ..."
"Informative and interesting. Thank you. This raises questions about the term Protestant Reformation."
the old scribe How the English Reformation was Named: ..."
"Thank you for the insights. As you pointed out, technology has been a two edged ..."
the old scribe Is Religion Naturally Averse to Technology?
"I suppose the question is whether or not the Holy Spirit could use technology to ..."
Nimblewill Is Religion Naturally Averse to Technology?
Browse Our Archives
Related posts from Anxious Bench