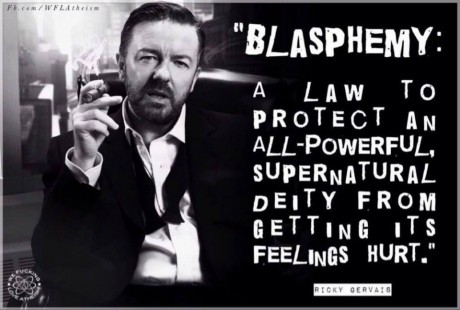 According to Webster’s Dictionary, blasphemy is great disrespect shown to God or to something holy.  Wikipedia defines blasphemy more unforgettably, more damningly, as the act of insulting or showing contempt or lack of reverence for a god or gods, to religious or holy persons or things, or toward something considered sacred or inviolable.

But the full reviling given to the word comes from the Ten Commandments, which are the moral foundation of Judaism and Christianity, and the highest law in Judaism.  Blasphemy spans at least five of the ten commandments, and in fairness, all ten:  Thou shalt have no other gods; thou shalt make no graven images or likenesses;  thou shalt not take the Lord’s name in vain; remember the Sabbath;  honor thy father and mother; thou shalt not kill; commit adultery; steal; bear false witness; covet. 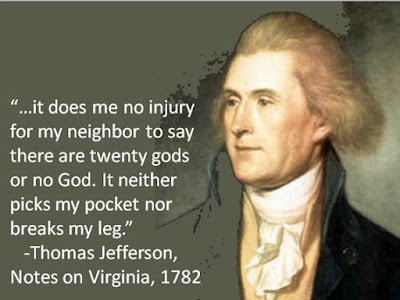 It isn’t hard to understand the blasphemy in any of these.  We each have our lists of blasphemies committed – F bombs dropped, ordinary  ‘damns’ invoked,  Sabbaths spent shopping or drinking or working or lazing around, anything but worshiping.  And as for other gods, we’ve all waltzed around warrior and flag idolatry, or in some way sold ourselves for money, or worshiped beauty.  In our culture, so mesmerized by images, the icon of celebrities looms large, and we follow them (a form of worship) in our choices of clothes, cars, beer, sex.  And we slander one another, and it becomes bullying when it gets on Facebook.

Jesus was always being accused of blasphemy.  He broke Sabbath laws.  He ate with sinners.  He healed people and what powers was he using to do that? many wondered.  Worse in the eyes of some, he told desperate people their sins were forgiven, and the horrified clergy declared he had not that right.  He offered himself as an image of God.  He interpreted scriptures in new and challenging ways, outraging the clergy everywhere.  He encouraged people to forsake traditional ways of thinking about God, and to embrace their own experiences as better wisdom. 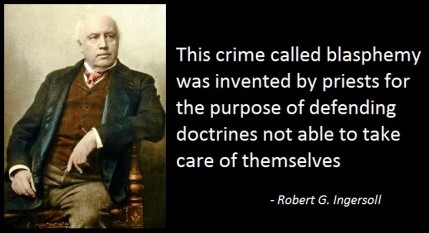 Mark writes the scribes called him Beelzebul and said he got his healing powers from Satan.  They said he was out of his mind.  The slander about him was loud and public, and his family heard it, and came out to restrain him.  But he wouldn’t back down.  He threw the accusations back at the crowd, asking, How could I use Satan’s power to cast out Satan?  And he told them parables with adages they could remember, like a house divided against itself cannot stand.

He told them people would be forgiven for their sins, and for whatever blasphemies they uttered, but what would not be forgiven was sins against the Holy Spirit.  He taught them that the Holy Spirit was a spirit of welcome for foreigners and for strangers, for people in trouble; and for new ideas and new hope.   And when his family came to the door of the room where he was preaching, he said to the crowd, Whoever does the will of God is my brother, my sister, my mother.

The Holy Spirit was embracing and inclusive.  And those who were rejecting and exclusive, they were the blasphemers whose sins were eternal, he taught.

As if to illustrate the text, this week Cardinal Parolin, Secretary of State for the Vatican, told the international press that the Irish vote approving gay marriage was  ‘a defeat for humanity.’  In reality, it was a defeat for the Vatican.

There are so many lively arguments over blasphemy, and who is committing it in our world.  For now, though, my heart is drawn to the earth itself, to the suffering, wounded earth, the exhausted waters, threatened species, unbreathable air, all damaged in our worship of war, money, and the possession of beauty. 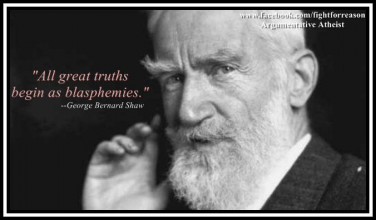 There is a new picture of Eden at the top of this blog, a portrait by the Austrian artist Peter Wenzel, bought by a wise Pope to be part of the Vatican Collection, which the Vatican  generously makes available to the world.  Even in the slice you can see above, of the much larger picture,  Adam and Eve are not at the center of creation.  Neither is the Tree the most significant part of nature there.  Eden teems with life.  The creatures are busy with their own histories, their own learning about the world, their own learning about one another.  The river, as well as the tree, is an agent of God and has a role to play.  The tree is not the only fruitful thing, there are flowers in bloom on the bush near Adam.  And the species are interacting – a bright blue bird is near Adam and Eve, and above them, where you cannot see, is an ape in the tree, as well as the serpent, whom you can see in part.

In the painting, Eden is full of curiosity.  It is not a quiet, orderly place, it is a place teeming with life. None of the creatures, except possibly the blue bird, is looking at Adam and Eve.  The humans are not in charge here.  Eating the apple is a normal act of curiosity, albeit a somewhat  foolish one.  It is a forgiveable blasphemy, a forgiveable sin, not one against the Holy Spirit, which hovered over creation and was put into every living thing as God’s blessing.   And the whole earth, not just a small, lost garden, is the handiwork, the loving work, of God — to be cherished, not exploited or condemned for money, or in war, or because it is the fashion to own rhino horns or ostrich feathers, elephant tusks or crocodile shoes.

In the wisdom of Jesus,  unforgiveable blasphemy was committed by those who made it doctrine to condemn this woman for the sins of men in generations to come, men who cannot be held accountable for their ‘ruined nature’ because of Eve.  Wenzel helps us to see her, and Adam, in a new perspective, and to find our way to care for all creation, seeing in its birth story far more than a single act of sin.

The posters above are all from Google Images.

June 8, 2015 Seeds
Recent Comments
11 Comments | Leave a Comment
"Yes, he was Minority leader at the time, not Speaker. Thank you."
Martin W. Eldred It’s Pentecost – and Something Is ..."
"Conventional religion doesn't give Mary nearly enough attention; nor Ruth, nor Elizabeth, nor the Saints ..."
Emily Elizabeth Windsor-Cragg No More Lying About Mary
"Nancy - what happened to you? You've all but disappeared?"
Pat Pickett Easter and the Bandit Shepherd
"There is more than one way to interpret the writings of the Bible, just because ..."
Mary-Anne Lomas No More Lying About Mary
Browse Our Archives
get the latest from
Progressive Christian
Sign up for our newsletter
POPULAR AT PATHEOS Progressive Christian
1