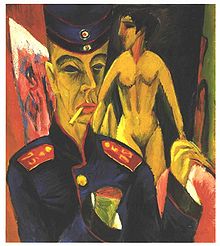 This week the BBC has brought us news of the discovery of a large cache of paintings that had been seized during the Holocaust from German museums and stolen from Jewish homes, by Nazi storm troopers.  This was all done as part of a plan to purge German culture of what Hitler and Joseph Goebbels called Degenerate Art, art that they considered to be un-German, to be Jewish or Bolshevist in nature.

Any art that presented something less than ideal was deemed 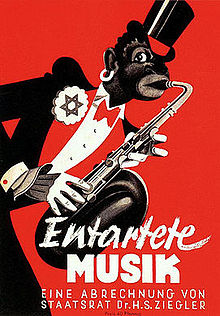 to be degenerate, and all Jewish artists, including such luminaries as Marc Chagall, Kandinsky, Mondrian, Klee, and all impressionists, were condemned.  Modern art infuriated Hitler, who loved paintings of beauty and perfection.  As well, music, drama, novels and sculpture, were purged.  Black music, and especially jazz, which was very popular in Paris in the 1920s and in Weimar Germany, was labeled degenerate.  One of Germany’s most beloved songs,  Dei Lorelei, was forbidden to be played on the radio or sung in public, because Heinrich Heine, whose poem it was, was Jewish.

About twelve years ago, when visiting friends in Chicago, I went to the Art Institute and happened upon an exhibit of this Degenerate Art, which included pieces that had been recovered, pictures of some still missing, and whole rooms for listening to the forbidden music and reading the  drama texts and lyrics which had been purged. 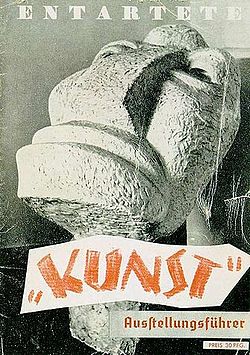 I have never been moved by so many conflicting emotions at an exhibit.  Some of the pictures were beautiful to me, but many were hard to see;  drawings of WWI vets who were missing limbs,  dressed in rags, begging for food; paintings of rage, despair, violence, cruelty, the many human emotions that are part of this world but not beautiful; and paintings that included the homely details of faces and bodies, details all of us have but most of us don’t want to see.  At the end of the large exhibit was a small room of paintings Hitler liked.  And it was with a shock that I found in myself some kinship to him, in that the idealized paintings of rural scenes and flawlessly lovely people were comforting and inviting.

The Exhibit represented the culture of Germany that was systematically dismantled, and the lives of artists, hundreds of them, that were destroyed.  Those who survived the war  lost most of their artworks, as well as their homes, families, schools, friends.

The news of the discovery of this hidden stash of several hundred paintings brings joy and hope, and also resurrects old pain, and the terrible shadow that such things can happen in this world.

And the news includes a sad and furtive story of the father and son who kept the paintings hidden all these years, in some terrible mix of greed, fear, distrust of all governments, and love of the art, which twisted their humanity into something ugly and sordid. 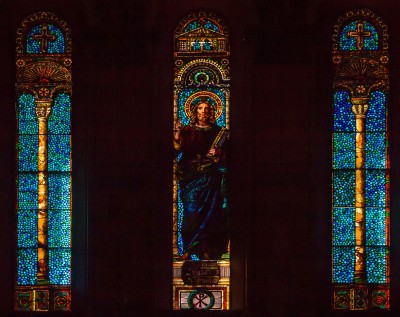 I am no stranger to the lure of idealism, the siren song of beautiful art.  For decades now I have taken confirmands on trips to Boston to walk through some sites of religious history, and I always end the tour in Trinity Church, where I know the beauty will transfix them as it does me.  The amazing window of Christ in Majesty will pull a deep Amen out of us all.

So this week’s reading, in Luke 21, speaks to me directly, and it speaks to all that has befallen Jewish people in the past century.  In the reading, the disciples are marveling at the beauty of the temple, the beauty of the stones and the decorative gifts people have brought there.  And Jesus responds, saying to them, all of this will be destroyed, and there will be terrible suffering.  You will be hated and you will be betrayed.  And by your endurance you will gain your souls.

He does not say what I want to hear:  by loving beauty you will gain your soul.  He does not say, I have come to bring you to a beautiful place, so try to keep everything sordid and ugly out of your vision.  Turns out, those were Hitler’s teachings. 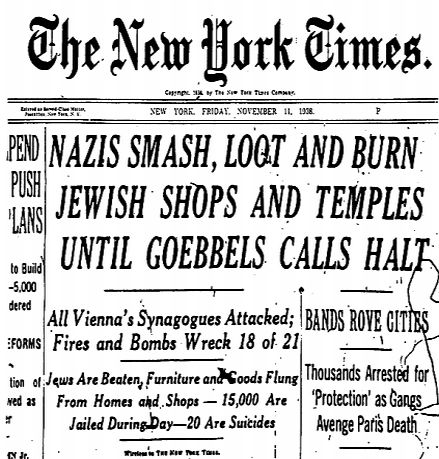 Hitler’s passionate embrace of idealized beauty led him to really Degenerate Works, begun seventy-five years ago this week on the night of November 9, 1938,  the night the Holocaust began.  The German Nazis planned this night , Kristallnacht (German for Night of Broken Glass)  as a staged mass uprising.

Hitler and Goebbels contacted storm troopers around the country and told them to attack Jewish buildings, but to make it look like spontaneous demonstrations.  The police were told not to interfere with any demonstrators, but to arrest the Jews and to charge them with provocation.  Firefighters were told to put out only fires in adjacent Aryan properties.  And everyone cooperated.

In all, more than 1,000 synagogues were burned or destroyed, 7,000 Jewish businesses were looted, and Jewish hospitals, homes, schools, and cemeteries were vandalized.  In the days following, thousands of Jews were sent to concentration camps, to ‘prevent further rioting.’  In the end, more than 12 million people died in concentration camps, 6 million Jews and the rest a combination of Communists,  physically and mentally disabled German people, homosexuals, socialists, trade unionists, Polish Catholic resistance fighters, and a few German Christians, like Dietrich Bonhoeffer, who opposed Hitler.

Jesus tells his friends, Don’t anchor your faith in the beauty of the temple, but in your ability to endure evil, without flinching, and without looking away.  For the love of God is not about perfection, not about beautiful temples, but about your eye seeing beauty everywhere, even in the midst of hell.  One beloved world, full of grace.

1.  Self Portrait as a Soldier, by Ernst Ludwig Kirchner, 1915.  Part of Hitler’s Degenerate Art Exhibition, 1938.  Image from Wikipedia page for Ernest Kirchner.

3.  Entartete Kunst, cover for exhibition program, 1938.  Hitler’s Degenerate Art was seized, displayed to educated the public, then sold outside of Germany or destroyed. Image from Wikipedia page for Degenerate Art Exhibit.

5.  Front Page, New York Times, Nov. 11, 1938.  Image:  Wikipedia page for Kristallnacht Night of Broken Glass.  The Times reports the destruction but incorrectly reports that Goebbels called a halt to it.

November 4, 2013
The Barren Woman at the Edge of Eternity
Next Post

November 17, 2013 The Dying Time
Recent Comments
9 Comments | Leave a Comment
Browse Our Archives
Related posts from The Bite in the Apple