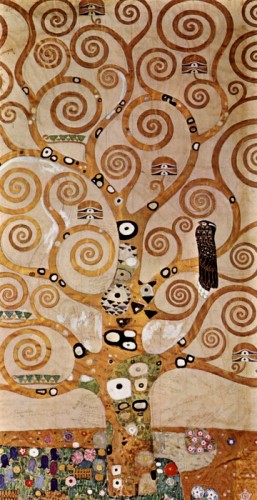 Hope is the thing with feathers

That perches in the soul –

And sings the tune without the words –

Increase our faith, they implored him, these followers who had given up everything in their world for Jesus and found themselves stumbling in doubts and lost in muddlement.

If you had faith, even as tiny as a mustard seed, Jesus replied, you could say to a mulberry tree, ‘Be uprooted and planted in the sea,’ and it would obey you.

Astonishing words !  At once, he offers them tantalizing possibility and strips them of whatever faith they thought they had.  They can’t command trees, so clearly they do not have even a mustard seed size grain of faith.  Yet Jesus never did such things:  did not fling the barren fig tree into the sea, did not plant anything in the sea except his footsteps which disappeared on the waves.  He did not remove mountains from their accustomed places in this world,  even though that image of faith was common in Jewish tradition.  Jesus did not sweep the mountains of Herod and Pilate’s obstinacy away.

When Satan urged Jesus to fly from the Temple tower, to turn stones into bread, to rule the cities of the world, Jesus named these temptations, and, in faith, turned away to the harder work of enduring a difficult time. 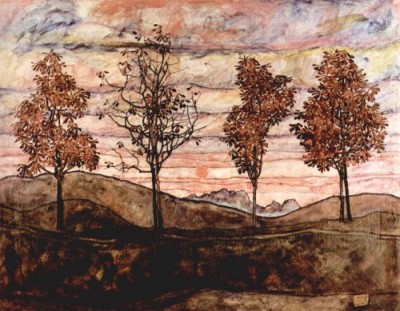 But faith is not unshakable confidence, the thing most often prayed for as the opposite of doubt and fear.  Jesus had his famously shaky moments, and they were remembered.

In this same paragraph of conversation in Luke, Jesus turned from the mulberry tree to the life of a slave, saying, as part of his answer about faith,  Would you say to a slave who has come in from hard work, Sit down and eat?  No, you would say, Prepare food for me, after that you may eat. Do you thank your slave?  So you also, when you have done your work, should say to yourselves, we have done what we ought to have done, and no more. 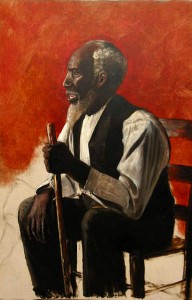 I shrink from these tough words, in which I, in faith, will not be gently treated, a sweet lamb held in loving arms.  And even in my shrinking, I hear Jesus saying faith is not something to have, but something to be.  Faith is a worker who expects neither praise nor reward, but understands the work itself as what I am.  And faith is the mulberry tree leaving the ground in which it has always stood, to live in an ocean of windswept water, because it is a faithful tree.   So an increase of faith would be the extra work  demanded of the tired worker,  would be the tree surviving longer in the alien element.  Not joyful certainty, which is what I want it to be.  Instead, a shaky setting of my feet in whatever the day brings.

Colum McCann,  in his novel Let the Great World Spin, writes of Corrigan, an angry

and devoted young religious Irishman who chooses the company of drunkards and the poor: (he) wanted a fully believable God, one you could find in the grime of the everyday.  The comfort he got from the hard, cold truth – the filth, the war, the poverty – was that life could be capable of small beauties.  He wasn’t interested in the glorious tales of the afterlife or the notions of a honey-soaked heaven.  To him that was a dressing room for hell.  Rather he consoled himself with the fact that, in the real world, when he looked closely into the darkness he might find the presence of a light, damaged and bruised, but a little light all the same.  He wanted, quite simply, for the world to be a better place, and he was in the habit of hoping for it.  Out of that came some sort of triumph that went beyond theological proof, a cause for optimism against all the evidence.  Someday the meek might actually want it, he said.

Corrigan’s thirst for faith drives him out of his home and into flophouses, monasteries, asceticism,  alcohol, books, pacifism, foolhardiness, New York City and more, more, in the days he is given.  His life, then, is not unlike the lives of Christ’s disciples, who, though they cannot move mulberry trees into the sea, are themselves moved by Christ to uproot their lives and put down roots in an ocean of unknown world waters.  In alien places they then uprooted empires and flung down thrones.  Millions, following them, have planted their roots in the waters of the fonts of hope.  So the disciples did command the trees of this world, but not in an instant – their moment has stretched through centuries of work and uprooting, stretched like the long days of slaves. 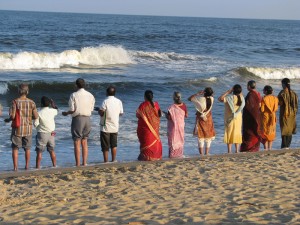 Mary Oliver writes of such thirst:

Another morning and I wake with thirst

for the goodness I do not have. I walk

out to the pond and all the way God has

given us such beautiful lessons. Oh Lord,

I was never a quick scholar but sulked

and hunched over my books past the

hour and the bell; grant me, in your

mercy, a little more time. Love for the

earth and love for you are having such a

long conversation in my heart. Who

knows what will finally happen or

where I will be sent, yet already I have

given a great many things away, expec-

ing to be told to pack nothing, except the

prayers which, with this thirst, I am

3.  Uncle Andrew, a Slave born at The Hermitage (Pres. Andrew Jackson’s home), set free in his fifties, who remained there as Caretaker the rest of his life.  Kentucky, US. Vanderbilt Divinity School Library, Art in the Christian Tradition.

5.  Family Giving Thanks to the Ocean.  Photo by Tiruvanimayur.  Chennai, India. Vanderbilt Divinity School Library, Art in the Christian Tradition.

The IMDB "Goofs" page for the...
slacktivist
Related posts from The Bite in the Apple