How Does the Creature Say Thanks

How Does the Creature Say Thanks October 5, 2013 Nancy Rockwell God of the sparrow

God of the whale

God of the swirling stars

How does the creature say Awe

How does the creature say Praise

God of the rainbow

God of the cross

God of the empty grave

How does the creature say Grace

How does the creature say Thanks

Jaroslav Vajda’s hymn, from which these words come, is loved for its inclusion of the creatures of earth and heaven in the spiritual life we humans share.   And he raises in these verses the question Jesus raised: when, and why, do we say Thanks?  What is the grace that is in us, or is absent from us, when mercy touches us?

Luke tells the story of ten lepers who beseech Jesus for mercy, mercy, keeping their distance, as by law they must.  They are objects of fear and loathing.  Not just their health, but their homes, their lives, friends, work, family, are gone because of this sickness that has grasped them. 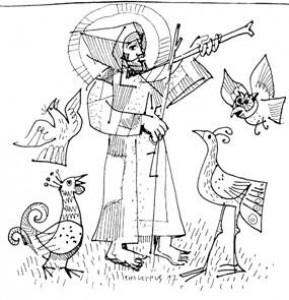 Jesus says, Go and show yourselves to a priest.  (Who has the power to pronounce them clean.)  They walk on.  As they walk, they realize they are healed.  One turns back to give praise and say thanks.  The others keep on going.

Jesus asks the question:  why do nine rush away without giving thanks, and why is this foreigner the only one who does?   And, to that one who came back, he says:  Your faith has made you well.

The curse of leprosy has made the ten a community, joined in suffering and misfortune.  They need one another.  And because of their misfortune they have no others.  Their prayer is a single voice with many echoes.  Mercy!  But healing will divide them, for it means different things to them.  The mercy they long for is not just the restoration of their flesh, but restoration of their lives.  They long to go home.  And the steps that will take them there include the pronouncement of the priest that they are clean.  Their joy is unreal without that.  And so they rush onward, running away from their prayer to the next desired thing.

But joy will alwa 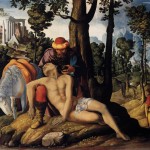 ys elude them, for they only believe their healing when others believe it, they seek its confirmation from others, and so they will be forever subject to the joy-snatching comments Anne Lamott calls ‘drive-by shootings of the mouth’:  Hey, aren’t you the guy who had leprosy?

They’ll be held at arms’ length by some, maybe even by some in the family.  Recovering alcoholics, clean addicts, ex-cons, the disabled, all know about this kind of life.  You can go home, but belonging at home is something else, when in someone else’s opinion you are still unclean, still unacceptable.    And that seems to be where Jesus brought wellness in.  Giving thanks is the beginning, because thanks is an act of accepting yourself as the be-gifted, the be-loved.

Thank you notes are such perfunctory cultural acts, nice to get, even nice to write, but more often ritual than blessing.  Years ago my little niece, then eight, wrote after Christmas, with her habitual enthusiasm, “Thank you for the candles, we really needed them.”    She underlined really twice, and put stars over it.  She made me laugh, and so I kept her note around, but then, when she died suddenly a few months later, I read it over and over in tears, and ever since it has held her voice, her child’s spirit of joy, her infectious enthusiasm for the possibilities in gifts given.  I give thanks for the words that keep her alive in my heart. 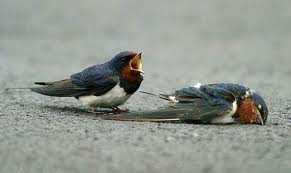 Communities of shared loss:  parents who have lost a child; recovering addicts; cancer survivors; Parkinson’s sufferers; refugees: like the ten lepers, share a single prayer.  Those who belong to them are forever changed by these communities.   The memory of misery, its taste, feel, sorrow and grief, are ever part of those who heal, part of the survivors who love them, too.  In the community of misery, they are home, even if not healed.

The one healed leper who could never belong in Israel because of being foreign, knew this.  He understood that his home was now with the man who understood his misery in grace, who heard his prayer.  The unkindness of the world cannot touch him, for he is not seeking a return to life before leprosy.  He is walking forward into the unknown world of wellness, where what is foreign is no longer of importance, nor is what has been unclean, nor are there distinctions between the spirits of the living and the dead. 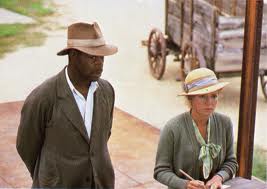 There is an old movie, Places in the Heart, a tale of depression era life in the American south.  Murders, lynchings, and betrayals occur in it, and the bond between a white woman and a black man save a family.  But they are eventually torn apart by racial bigots.  The final scene takes place in a small country church, where communion is being passed among the pews.  The dead are there, sharing pews and bread and wine with the living, shooter and shot, betrayer and betrayed, husband and cuckold, bigot and black man.   It is a sacrament of surpassing joy.  A thanks-giving to remember.  An amazing grace. 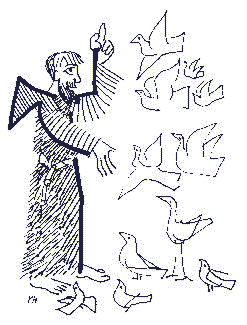 Saint Francis of Assisi, whose Feast was celebrated by the blessing of animals in many churches last week, understood himself as one who had received mercy, and because of it, become unable to distinguish himself from those who lived in misery.  His prayer, which has been on the lips of millions, asks for these mercies:

where there is hatred, let me sow love;

where there is injury, pardon;

where there is error, truth;

where there is doubt, faith;

where there is despair, hope;

where there is darkness, light;

and where there is sadness, joy.

Such are the works of faith, and they make the world well.

1.  Sparrow.  Sole image on Google is the TAT Forum, Spiritual Foundation site, tatfoundation.org, where it is used without attribution.

2.  St. Francis and the Birds. Clip Art, used by Scott Breslin on his blog, scottbreslin.org

7.  St. Francis Preaches to the Birds clip art, unidentifiable except for its presence on a small number of blogs.