The Persistent Widow and the Heartless Judge

The Persistent Widow and the Heartless Judge October 12, 2013 Nancy Rockwell

Your absence has gone through me

Everything I do is stitched with its color. 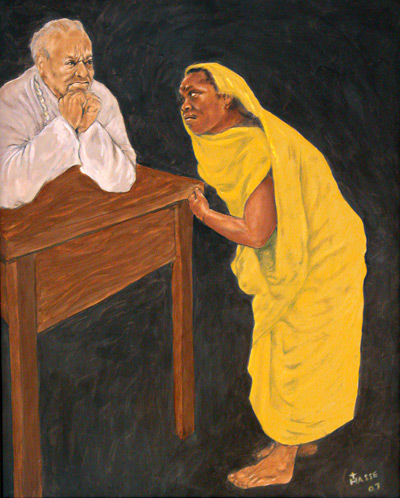 Jesus told the story as poser:  There was a judge who neither feared God nor respected people.  A widow, whose case he had ignored, kept coming to him, needling him for justice.  But after a while he gave her what she wanted, saying to himself, this widow keeps bothering me, so I will grant her justice so that she may not wear me out by  her continual pestering.   And Jesus said, Listen to the unjust judge.  God will grant justice to those who cry to him day and night.  Yet, will the Son of Man find faith on earth?

Luke says the story urges upon us not to lose heart.  So then, in this story, faith is having heart.  The heart to tackle impossible things.  The heart to endure.  To persist.  Not wilting, not letting discouragement overcome hope, not letting obstinate injustice overcome your belief that justice will prevail.

For years I have cheered for the mettle of this woman, who will not be stilled.  Who does not sit in her room contenting herself with tears and sorrow.  Who will not let that arrogant judge get away with being heartless.  Who is powerful in not being discouraged.  Whose hope is neither sweet nor fleeting, but rigorous.  Hope is her backbone.

She is Merwin’s needle, pricking, piercing, threading through the comfort of this powerful man.  And yet she is the speaker of Merwin’s longing words, for it is the absence of justice  that threads through her, stitching its color into her.  And yet the judge is the one stitched, tightly sewn to her by the needle of her conviction.  They cannot be absent from each other’s lives, for she believes justice must be threaded between them.  She stiches herself into his days like a strong colored theme. 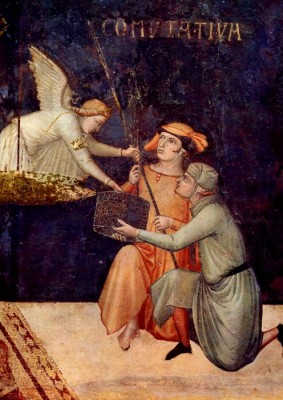 oy in stubborn persistence has been altered by the Tea Party.  For twelve days now Americans have been pierced by the sharp needle of their persistent public stitches.  The color of blood and blame has been threaded through our culture by the needlework of politicans, intent on what each needler insists is just.  The Tea Party, who seem to neither fear God nor respect the the people, has insisted on its right to halt the nation for the sake of their bête noir, Affordable Health Care.

The figures of those begging them to stop, those playing the widow’s role, have included powerful businessmen like Warren Buffet, world leaders and professors of economics,  historians and exasperated journalists, Wall Street and China (our biggest lender), and even small children standing outside the closed Washington Zoo.   Seemingly unable to grasp the enormity of the harm they are doing, Tea Party pols have proposed doing more injustice by funding some things and not others, opening the World War II Memorial but not the Vietnam Memorial for instance.  Wise heads have refused these responses as chaotic and merciless.  And many federal employees, like the Capitol guards, are now working as volunteers, in order that the chaos not increase.

Who is really the widow here?   Neither side, in truth, for Jesus spoke of a powerless woman confronting a powerful public figure.  All of these politicians have exceptional power.  Across the nation, people are being thrust into the widow’s position by the shut down.   Their cries are rising, urgently.    The President, who does hear them, has been pushing back against this tide of woes with  the widow’s persistence, speaking for the powerless, the uninsured, the immigrants, those whose need for justice would begin to be met with a new budget, with a raised debt ceiling.

In these days, everything we do is stitched with the color of the deathly absence of the budget.  The color of this injustice is the ashen pallor of the stilled body.

Yet Merwin’s poem has love in its lines, and could as well be read as the aching of lovers who are apart, rather than as the quarrelers’ lament.  We, too, ache and long for the return of the lively lover’s quarrel in which we live together as Americans, and which can resume once the budget is opened.

Perhaps, if we look with great care, we can see that the Judge and this widow are lovers.  Perhaps we can see that Congressional enemies are family, bound by more than disdain. 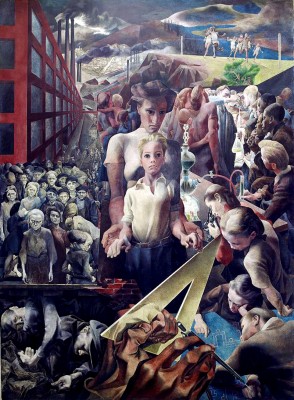 These have also been days of Nobel Prize announcements, when the world looks up from its quarreling to see whose talent has blessed our lives with extraordinary imagination.  And I have found myself wondering if there could be annual Having Heart Prizes, perhaps funded by Oprah or Bill Gates (as the Nobels were by Swedish chemist Alfred Nobel).  Perhaps a Committee of Interfaith Theologians from the world’s eminent theological schools could chose recipients for a number of categories:

Then virtue would not seem to belong only to the Stubborn, but as well to the Humane.  Then faith would not be defined as ideology, but as Jesus described it,  not losing heart.

Your loss of heart, Jesus says at the end of his story, will be a heartache for God, whose being is stitched through with your colors, the colors of fools and wacko-birds, the colors of the wise and magnanimous, the colors of illegal immigrants and veterans needing benefits, the colors of Yosemite and the Grand Canyon, the colors of America’s first black President, whose courage in these days has been a backbone for us all.

And all creation is stitched together by the needle of God, thread, color, and design woven through us, in the color of the persistent heart of God.

1.  The Persistent Widow and the Unjust Judge.  Jesuit Illustration.  No other identity discoverable.  Used in many religious posts, not offered for sale online or otherwise identifiable through Google.

October 5, 2013
How Does the Creature Say Thanks
Next Post

October 20, 2013 Thirst, a Word for Prayer
Recent Comments
8 Comments | Leave a Comment
"Yes, he was Minority leader at the time, not Speaker. Thank you."
Martin W. Eldred It’s Pentecost – and Something Is ..."
"Conventional religion doesn't give Mary nearly enough attention; nor Ruth, nor Elizabeth, nor the Saints ..."
Emily Elizabeth Windsor-Cragg No More Lying About Mary
"Nancy - what happened to you? You've all but disappeared?"
Pat Pickett Easter and the Bandit Shepherd
"There is more than one way to interpret the writings of the Bible, just because ..."
Mary-Anne Lomas No More Lying About Mary
Browse Our Archives
get the latest from
Progressive Christian
Sign up for our newsletter
POPULAR AT PATHEOS Progressive Christian
1

God Is Not a "He". The...
Thoughts of a Modern Celtic Wanderer
Related posts from The Bite in the Apple