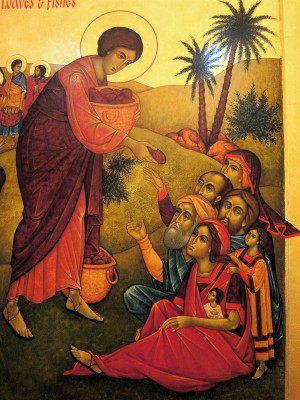 Everywhere Jesus went, there were crowds of empty, aching folk who believed Jesus was the answer to their needs, or at least they suspended their disbelief to give him a try, to touch his garments, to get his attention, to ask him to touch them.

They wanted miracles, because they believed they could not meet their own needs.  Jesus, though, kept asking them to feed each other, kept telling them they could do this, they could meet their needs in one another, find the fullness of life they sought in one another.  They needed to believe in themselves. 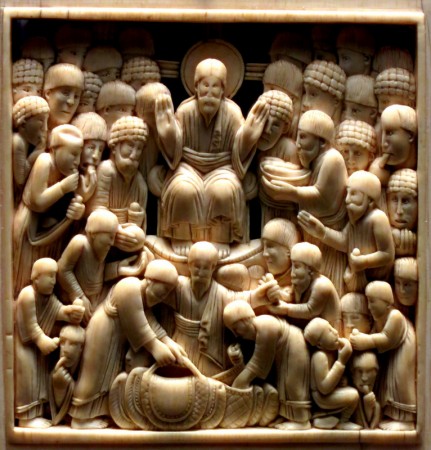 Even the disciples were scared to try to feed a hungry crowd, to accomplish something incredible.  But Jesus urged them, ordered them, to try, to try.  And the struggle was between their fear of failure, their conviction they would fail, their deep sense that what he asked of them was preposterous, their knowledge of the vastness of the hunger before them – and their hope.

When at last they did as he asked, that is, when they tried offering the little they had to the dragon hunger of the crowd, everyone was fed.  Fed by one another, for that food had to pass from hand to hand to hand. 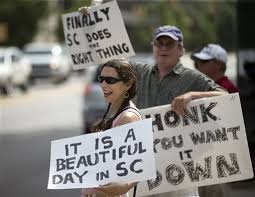 Who can explain the slaughter of nine beautiful lives in a church prayer group, and the fear and horror set loose among us all by this, the rage and terror and paralysis of hope set loose in Charleston and among black people?  Who can explain how that has turned into a powerful public conversation,  voices and prayers rising so convincingly that already impossible things have happened:  the Confederate flag has come down at the South Carolina state capitol, and at the Alabama state capitol, and is no longer allowed to be used at National Parks or Memorials or cemeteries and Mayors and Governors are initiating processes for the removal of statues in other southern states.  The Governor of SC signed the flag removal legislation with nine pens, one for the family of each slain Mother Emanuel church member. 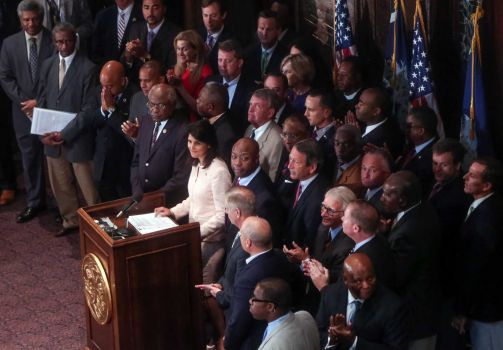 A South Carolinian , David LaMotte, who traces his ancestry back to the Confederacy, and to slaveholders, and who wants that flag to come down, wrote these words last week on his blog:

A White man whom I love recently said to me, after reading something I had written about race, “Sometimes I wonder whose side you’re on.” Let me clarify that: I’m on the side that doesn’t believe there are sides. We can’t hate people in the name of love, or put people down in the name of tolerance and inclusion, whether we’re winning or losing. We have to reach a little higher than that.

Some say that the flag issue is a distraction. They worry that we will win this struggle, call it done, and then go back to business as usual. Doubtless, some of us will. Others will be awakened to the fact that things that seemed impossible to change are not, if we work to change them, and will be energized to work for the next goal. There is no shortage of important work to do in the world. What is yours to do? 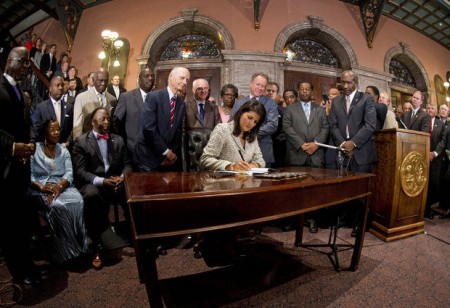 History moves incrementally, and lasting, real change is slow. This day has been a long time in the making. Those words are not a call to patience, however. We should be impatient with issues of justice. It’s a call to hope, and a rebuke to despair. This is only one step in a long journey, but things do change for the better if we work to change them.

As it turns out, the Rebels had it right in at least one regard. The South is rising again. This is what real rising looks like.

I’m a Connecticut Yankee, descended from an abolitionist preacher whose wife, for whom I was named, was a driver on the Underground Railroad, and I agree with David LaMotte – this is not about hating the south or looking down on southern white folk.  There is enough racism to work on in the North, in housing, education, jobs, all of which are largely segregated still. Yes indeed, there is more to be done, more work to bring about deep changes.  Those fed will hunger again.  Those made well will sicken again.  Hope needs revival, again and again.

What raised the Confederate flag 50 years ago was resistance to Civil Rights.  What brought it down this week was thousands of human voices in the south saying No More of This.We have all been given a feast of hope by the public conversation in South Carolina now, and by their legislative actions.  And we all need to say Amen, because a miracle has happened, and we have seen it, before our eyes.

5.  Gov. Haley signs the Bill to bring down the Confederate Flag, using 9 pens, one for the family of each of the 9 victims of the Mother Emanuel Church shootings.