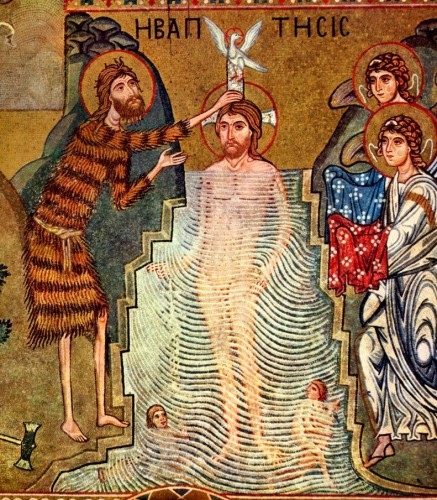 After the Star which was high in the heavens, this second Epiphany light is still above us but much closer, shining upon Jesus and splashing him with a name, Beloved, as he stands wet and revealed in the Jordan.

Each of these Sunday signs provokes some kind of struggle.  This one does not end in a chaos of murdered bodies and a disappearance of the Child and the Kings.  This one plunges Jesus into a wilderness of temptations, where he is surrounded by wild beasts, invaded by dreams, wooed by demons.  He contends mightily.  And he comes away whole.  What doesn’t kill you makes you stronger.  The old saying is now a hit song.  And in the light of his survival of his baptismal struggle, Jesus is now stronger.

In the end even what does kill him will make him stronger.  But in the meantime, in the world of church, baptism has become an occasion that is not about survival or strength.   Baptism has become its customs, once meant to celebrate its meaning, but now the only meaning of the celebration:   a time for dressing the baby in something outlandish, an occasion of presents and promises and family.   And none of this has anything to do with profound and dangerous journeys of the spirit.   The danger of water and demons,  the spirit journey, the profundity, have gotten lost in ritual huzzahs, so much so that most Christians, in their own profound journeys, do not think of them as part of their baptism.

So the film, The Life of Pi,  is a huge gift.  Ang Lee’s film tells us, shows us, draws us, into the journey called baptism, in which the vast seas, the sky, the creatures of both, become one with the small boat in which the boy Pi struggles to survive.

Pi  is a young man from Pondicherry, India.  Brought up by a Hindu mother and a skeptical father who is a zookeeper, he was named for a swimming pool in Paris: Piscine Molitar, where his father’s best friend, a victim of polio, had an ecstatic swim and an experience of salvation.  Now in his late teens, Pi has survived a shipwreck.  His  family were attempting to emigrate to Canada with their animals when the accident happened and all but Pi and a few animals were drowned.  Pi spends 212 days on the open seas in a lifeboat, with a tiger.

Signs are taken for wonders.  “We would see a sign”:

The word within a word, unable to speak a word,

Swaddled with darkness.  In the juvenescence of the year

Pi is tested, tempted, transformed, drowned and revived a number of times.  Before he left Pondicherry he had befriended an Orthodox priest and had longed to be baptized.   The entire film is about his baptism.   In it, he is confirmed in his Hindu faith, that the spirit of God lives in all creation, and also in the Moslem faith he saw practiced by his friends: salvation rests in submission to God.  And Pi becomes Christian.  The creatures of air and sea, the waters, sky and sun, the tempests, are part of Pi’s baptism, as they were for Christ.  Most of all, the Tiger, who is the Word within a Word, unable to speak a word.  As with Christ’s temptations, we are left with the question of Pi’s, were they inner – or outer?

In Pi’s journey light and blessing come to him from sky and sea.  It is land that cannot save him, land that holds death and hidden dangers.  Everyday afterwards, in his landward life, he prays so that he may survive, acknowledging the Tiger in love and awe. 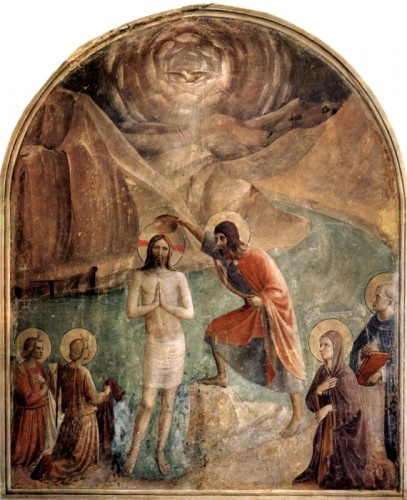 St. Jerome, who first translated the gospels and letters of the early church from Greek and Hebrew into Latin, said that the name Mary, which first appears in the New Testament,  derives from the word for sea:  mer in French, mar in Spanish and Italian.  Jesus, then, in Jerome’s understanding, is born of the union of fire and water, of the Sea and the Fire Spirit of God in heaven.  It is on land that he is endangered, from cradle to cross.  Sea and sky sustain him, as he walks the earth among us.

And so it is for those of us who are baptized in the waters of his journey.  The Tiger is Christ in the boat of our days, holding our death and the key to our salvation.  Beloved is the name we are given for the Tiger, who is part of our earthly journey.

That Pi survives is miracle.  That he accepts the Tiger as part of his survival is a sign of the miracle.  That only the Tiger knows what Pi has been through opens Pi’s soul.  That the Tiger is Christ and Pi’s own Soul, is the final fathom of the fathomless sea.  Pi survives, and lives on as Hindu, Christian, and Moslem, a man devoted to the God he has known in signs and wonders, in terrible darkness, and in a small boat on the great sea.

January 13, 2013 Cana - An Unexpected Time
Recent Comments
8 Comments | Leave a Comment
Browse Our Archives
Related posts from The Bite in the Apple