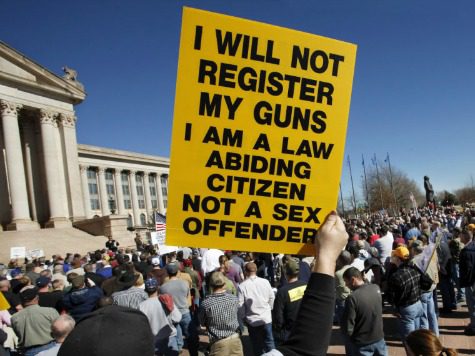 Did you see this Breitbart article?  Mark Meckler writes:

Did you know that quietly–very quietly thanks to a biased media–tens of thousands of American citizens delivered a message about the limits of government?

Did you know that citizens of one state engaged in a mass act of civil disobedience that has left statist officials from both parties scratching their heads as an entire regulatory scheme collapsed?

Last week, Connecticut politicians were shocked to find out that only a fraction of Connecticut gun owners obeyed a state directive to come forward, declare their weapons, and register them with the government.

In other words, Connecticut forced people to register their firearms and NO ONE DID IT!

I LOVE that sign that the guy is holding up, too.