Woman Films Own Abortion: Murder Gives Her the Audience She Always Wanted

Woman Films Own Abortion: Murder Gives Her the Audience She Always Wanted May 7, 2014 Bristol Palin 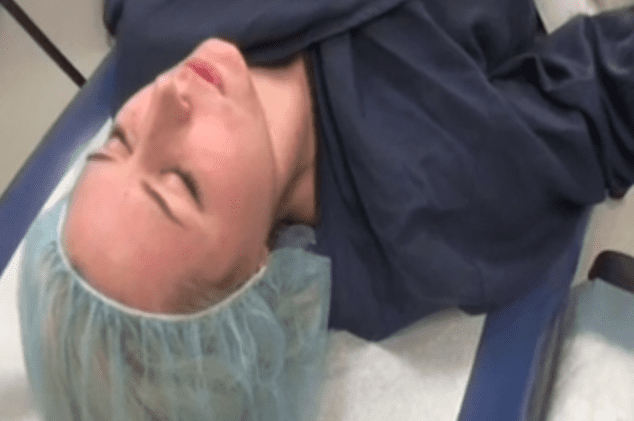 A 25 year old abortion counselor in New Jersey filmed herself undergoing an abortion at the facility where she works.  The video isn’t graphic, Cosmopolitan assures us, because it focuses on her face while she breaths and hums.  This is how she described the moment:

I knew the cameras were in the room during the procedure, but I forgot about them almost immediately. I was focused on staying positive and feeling the love from everyone in the room. I am so lucky that I knew everyone involved, and I was so supported. I remember breathing and humming through it like I was giving birth. I know that sounds weird, but to me, this was as birth-like as it could be. It will always be a special memory for me. I still have my sonogram, and if my apartment were to catch fire, it would be the first thing I’d grab.

Her most prized possession is the sonogram picture of the baby she just murdered?

I want to puke. This is barbaric.

It should be pointed out that this woman is someone who had tried to be an actress.  It looks like killing her baby gave her the platform she’d always wanted.  Second, the reason it isn’t graphic is because it doesn’t focus on the baby.  At the other end of her body, the part that’s not humming happily and saying, “I am strong,” something quite different is happening.

At the end of the video, she explains why she doesn’t feel guilty.  “I just feel in awe that I can make a life.”

What she didn’t go on to say was the obvious – that she just filmed herself taking a life. Being strong is keeping the life of an innocent baby, and delivering it despite the less than ideal circumstances.

“Woe unto them that call evil good, and good evil; that put darkness for light, and light for darkness; that put bitter for sweet, and sweet for bitter!” Isaiah 5:20

[I won’t link to her video or her article — no need to further her acting career.]

MORE ON THIS HORRIBLE TOPIC: “HAUNTED PHOTO OF WOMAN WHO FILMED HER OWN ABORTION.”

May 7, 2014 "Haunted" Photos of Woman Who Filmed Own Abortion
Recent Comments
283 Comments | Leave a Comment
"Charges ? ? ? That's Funny.... Bottom Feeder Down ..."
Rickey Douglas Love How Else Was ‘He Gonna Get ..."
"Her "belief" in this discount goes against our laws. That is why she was threatened ..."
Cvb Restaurant Stops “Prayer Discounts” after Atheists ..."
"I'm thinking you don't know any atheists either katepatate. Or at least don't realize you ..."
Cvb Restaurant Stops “Prayer Discounts” after Atheists ..."
"Wow. Sodomites and atheists . Interesting. Can we assume you are referring to gays? And ..."
Cvb Restaurant Stops “Prayer Discounts” after Atheists ..."
Browse Our Archives
get the latest from
Politics Red
Sign up for our newsletter
POPULAR AT PATHEOS Politics Red
1