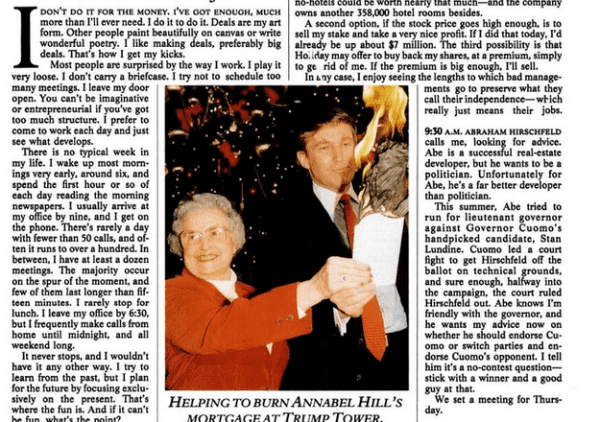 He really does practice what he preaches. Donald Trump stuck up for a hard-working farmer’s wife who was about to lose her farm to auction in 1986.

A drought had hurt their farm badly over a couple years, and Annabel Hill’s husband had committed suicide 8 months earlier. He was trying to save the farm with his life insurance money, but it wasn’t enough.

Trump wrote about the story in several books. Here’s how he explained why he wanted to play a part:

“It was a very sad situation, and I was moved,” Trump writes in The Art of the Deal. “Here were people who’d worked very hard and honestly all their lives, only to see it all crumble before them. To me, it just seemed wrong.”

So he called up the bank to see if anything could be done. When they said there was no way, he went a little crazy:

“That really got me going,” he writes. “I said to the guy: ‘You listen to me. If you do foreclose, I’ll personally bring a lawsuit for murder against you and your bank, on the grounds that you harassed Mrs. Hill’s husband to his death.’ All of a sudden the bank officer sounded very nervous and said he’d get right back to me. Sometimes it pays to be a little wild.”

The bank relented after that. Trump and some other connections started a fundraising campaign to pay off the farm’s debt in 30 days. It worked — with him providing a few thousand to close the gap — and Annabel got to burn her mortgage in the atrium of Trump Tower that Christmas.

The Hill family still lives on the farm and are forever grateful to Mr. Trump!

Why do these kind of stories not come out in campaigning? Wouldn’t it be awesome if candidates told nice stories about each other? I guess then nobody would pay attention!