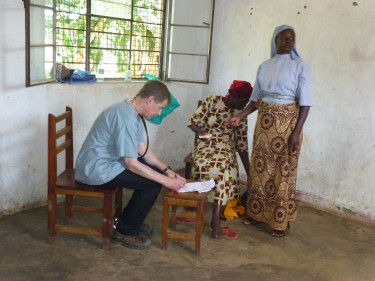 Several pregnant women about to give birth lay on a cold cement floor, shivering due to fever and malaria. That sight prompted Chicago doctor Kevin Hunt to add an unexpected new direction to his life.

As I wrote about in a blog post last year, Dr. Hunt traveled to Northern Uganda in 2007 at the request of Father Sam Okori, an African priest working in his parish while in the United States taking pre-med classes. Father Sam’s goal was to become both a priest and a doctor so he could return to his home diocese of Lira and minister to the vast medical and spiritual needs of his people. He asked Dr. Hunt to visit Northern Uganda with him, so the American could see first-hand the challenges of life there.

The big-hearted doctor agreed and found a poverty-stricken population that desperately needed help, especially since the Ugandan government offers much better health care to its citizens in the South, around the capital city of Kampala, than it does to those in the North. In addition, the people of Northern Uganda were also still suffering the physical and psychological after-effects of the crimes perpetrated on them by Joseph Kony and the Lord’s Resistance Army, whose brutal 30 years of oppression included murder, mutilation, and the kidnapping of children who were then forced to become child soldiers.

During a recent interview on “Christopher Closeup,” Dr. Hunt explained that Uganda’s Catholic healthcare system tries to make up for the government’s neglect by hiring doctors and placing Sisters in the North to care for patients of all faiths in various field hospitals and clinics. While their efforts are noble, conditions set a limit on what they can achieve.

Though Dr. Hunt treated hundreds of patients during his trip, one pivotal moment changed him. He recalled, “[We came] into this clinic in the dark one night, and there were these pregnant women with malaria lying on the floor about to deliver their babies. They had high fevers, and had IVs hooked into them with quinine trying to give them treatment for their malaria. They were shivering and laying on the cement floor because there were no beds in the little infirmary. I said, ‘We’ve gotta do something, Fr. Sam,’ so we drove back to Lira, picked up six beds and mattresses and drove back, about 50 miles or so. The next morning, we brought the beds into the clinic and discovered one lady had delivered overnight and another lady was about to deliver, so we got them all into their beds. Everybody was so happy that they could at least have some comfort. That’s when I decided to do something about it when I got back home.”

That “something” consisted of Dr. Hunt and Father Sam starting a foundation called Medical Aid to Northern Uganda – or MANU, a 501 (c)(3) organization which works in conjunction with the Diocese of Lira to provide financial aid for improved medical facilities, medical equipment, and medicines – along with an occasional mission trip to make the ministry more personal.

Who Says Watching TV Isn’t Good For You? 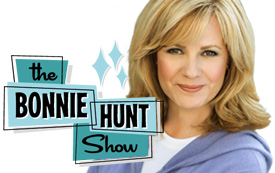 In order to gain attention for their project, Father Sam and Dr. Hunt appeared on “The Bonnie Hunt Show” to talk about it (Bonnie is Dr. Hunt’s sister). Watching the show that day was Wisconsin pharmacist Jeanine Krueger who told her fellow pharmacist, Nicole Schreiner, about the project. The two of them felt inspired by the idea of helping and took the leap of faith to get involved, eventually becoming MANU Board members and traveling to Africa as well. 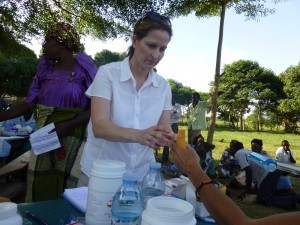 Nicole, who joined Dr. Hunt for the interview, noted that her time in Uganda was full of challenges because people’s medical records and prescriptions often consist of an old notebook with pages falling out. In addition, she explained, “One of the things that we take for granted is we have a pharmacy on just about every corner in most areas of the United States. But in Uganda, people may have to walk 50 miles to have access to a pharmacy. And so to be able to refill medications on a regular basis is a challenge for them.”

Pharmacies also lack medications that are common here in the United States, those that treat diabetes or hypertension, for instance. Before MANU goes on a mission trip, therefore, they spend several thousand dollars on medicine to distribute.

Ninety-five percent of the money donated to MANU goes directly to help the people of Northern Uganda because all administrative work is done on a volunteer basis.

One of the biggest improvements that has occurred as a result of MANU took place at Pope John’s Hospital in Aber, Uganda. When Dr. Hunt first saw the X-ray facility there in 2007, he was shocked at its poor conditions: “There were big cracks in the wall. If it rains, there are leaks all over the place. There were a couple of X-ray machines in there from the 1950s that were still being used, but the quality of the X-rays was very poor. When we got back home, our first main goal was to build a new radiology building there, which we finally finished about a year ago. And now we’re getting new X-ray equipment.”

A Ministry Beyond Medicine

Dr. Hunt adds that MANU’s mission trips go beyond providing check-ups and prescribing medication. He said, “The people express their gratitude to us for giving them simple things, even as simple as touching them or talking to them. It doesn’t have to be any kind of medical intervention. They’re so happy and appreciative of the emotional support that you give them. It really changed me a lot.”

Nicole has been changed by her trips as well. She said, “One of the biggest things for me was to be grateful with the things that we take for granted. I have two young children and I tell them, ‘A lot of these children don’t have shoes, much less toys to play with.’…What we consider as a ‘need’ is really not a ‘need,’ necessarily. The way you can make a happy life out of very little is impressive to me and something that I try to remind myself on a daily basis.” 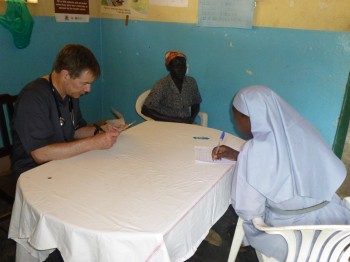 In addition, the spiritual lives of Northern Ugandans seemed strong to Dr. Hunt, largely because of the support and compassion they receive from local clergy and religious. He said, “Especially in the Diocese of Lira, there’s a lot of dedication from the priests and nuns to helping these people out and being there for them. I think that’s their lifeline. They believe there must be a God because these priests and nuns have dedicated their lives to them.”

A Habit of Giving

During our interview, I pointed out to Nicole that hundreds of thousands of people watched “The Bonnie Hunt Show” the day Dr. Hunt and Father Sam were guests, yet she was one of the few who took the initiative to get involved in a meaningful way. Where did that spirit of selflessness come from?

Dr. Hunt credits his mother Alice for his habit of giving because she taught him to “do unto others as you would have them do unto you.”

With heartfelt emotion, he also recalled a formative experience from his youth: “I started working as a nurse’s aide many years ago and, at that time, I wasn’t considering going into the medical field. I was just working a side job while going to school. I used to work the night shift in the cancer ward, so I talked to the patients. They’d always say to me, ‘You should think about being a doctor.’ And that’s what inspired me. Then one patient told me, ‘If you get into medical school, I’ll pay for a semester of school.’ She was a terminal, dying patient. I got into medical school right before she died. And she actually sent me the check for my first semester. So it was really inspiring to me.” 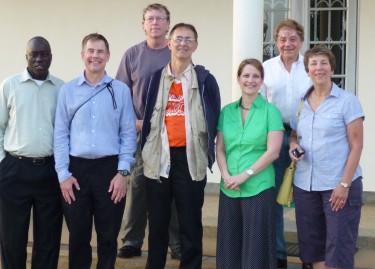 Though MANU has accomplished much, there’s still more to be done. In 2014, they plan to start building a mini-emergency room triage center for Pope John’s hospital. They also hope to return to Northern Uganda for another mission trip in August. And like on those previous visits, Dr. Hunt will likely be impacted just as much as the people he’s helping.

He said, “Just to recognize that these people have this absolute faith, it grounds you. It [makes you realize that] the simple life is the best. People that go for too much in life, it ends up getting you at the end. There’s no gain there. So I feel like it’s made me see that the simple life is the best, that you should have faith to keep going forward and do your day-to-day work and help people.”

February 14, 2014
Her Family's Love Makes Noelle Pikus-Pace's Pursuit of Olympic Medal Sweeter Than Ever
Next Post 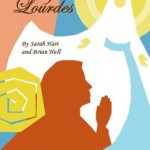