Every Gun n’ Rose Has Its Thorn

Every Gun n’ Rose Has Its Thorn October 7, 2014 Artur Rosman

After driving Dominik to kindergarten I took the girls for a spin around the block in the vain hope that they would fall asleep. Along the way I noticed a man who cultivates the Slash, guitarist of Guns n’ Roses, look. I see him frequently around the University District and Ravenna pinning concert flyers to walls and posts. He has the hair, the nose piercing, the aviator sunglasses (sometimes worn at night), even the huge Victorian steampunk top-hat.

There is something surreal about Seattle-Slash. He has brazenly crossed the boundaries of two realities that should not meet: the showbusiness world and the mundane reality of drinking coffee, dressing the kids, taking them to school, and so on. Hannah is thankfully napping now so I can write this.

The problem of improperly (illegally? impiously?) crossing boundaries was something that was close to me as a child.

I remember saying my evening prayers dutifully (sometimes) then worrying whether I had properly crossed myself to close off the prayer. In retrospect, this probably had something to do with a mild case of OCD that got whittled away by life cajoling me into the routine of changing diapers (having kids has a way of curing you of what Wittgenstein called false problems). Be that as it may, my issue had to do with scrupulously separating out the treasured world of the sacred from the messiness and profanity of my daily life, even if it was only my sleeping life.

It seems to me that as I grew older and came to know the Catholic religious tradition better the opposite problem became the real problem.

The issue now is how to invest my everyday life with religious significance. I want to invite the sacred into my broken profane life. I need a God who can incarnate himself into my unemployment, my career confusion, my financial problems, my making of crappy kids meals, my changing of diapers, and my overall inadequate parenting (which sometimes includes babysitting using children’s programming–high quality, I assure you).

I have not directly chosen any of the troubles listed above even if I am responsible for some (most!) of them. If I were a wiser person in the past I would have done everything to avoid them. But the past is past, and all that’s left is redeeming it. I’m stuck with its confounding consequences (although you can help out a bit through the recently installed paypal donate button on the upper right of my homepage).

Searching for the books on my TOP10 philosophy list was a balm to my wounds. In Love’s Work Gillian Rose talks about being forcefully exiled into reading. She was born with a wandering eye and as a result did not learn to read until she was seven. Reading came to her reluctantly, she resisted it, but then, eventually, the most difficult texts became an oasis of meaning for her. Rose, a deathbed convert to Anglo-Catholicism from Judaism (her life was always complicated), distills a general insight from this experience in a striking passage. I really do consider this to be one of the most remarkable things I have ever read:

The only paradises cannot be those that are lost, but those that are unlocked as a result of coercion, reluctance, cajolery and humiliation, their thresholds crossed without calm prescience, or any preliminary perspicacity.

Words like these make me doubt my doubt in myself. Perhaps there is a paradise at the other end of the search for an academic job (when I don’t know how I’ll pay for all the submission fees), a job to tithe me over in the meantime, and all those other things that I listed above (and don’t want to think about again, at least for a few minutes)?

But at this point in my life I’d like to invite God into my thorny situation, into my confusion, into being lost in the cosmos.

My hope is that this confession of weakness won’t get too wide a readership. Maybe that’s the wrong thing to hope for?

I won’t leave you with any of the 80’s guitar rock songs I referenced in this post. They’re mostly poison for the mind. I’ll leave you with something from the Dropkick Murphy’s. Some tickets to their concert dropped into my lap last minute last night.

And I went, reluctantly. 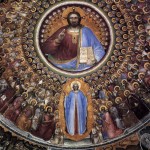 October 8, 2014 Synod14: The Church Needs to Replace the Family
Recent Comments
0 | Leave a Comment
"Wait a minute, what am I missing? The host must contain some gluten, lest it ..."
RPlavo . The Surprising Anti-Capitalist Logic Behind the ..."
"Gluten intolerance is completely -- and I mean completely -- different from celiac disease. Many ..."
Bobby Lawndale The Surprising Anti-Capitalist Logic Behind the ..."
"Read Bruno's comment: #2 below your ranting comment."
Adrienne Szatkowski Michael Voris’s Stunning and Admirable Broken-Hearted ..."
"Science needs "a confession of sins and an articulate profession of faith"? Seriously?Certainly, individual scientists ..."
Elzbieta 2 Reasons Why the March for ..."
Browse Our Archives
get the latest updates from
Cosmos The In Lost
and the Patheos
Catholic
Channel
POPULAR AT PATHEOS Catholic
1