For Catholicism the Spirit is the Root of Evil not the Body!

For Catholicism the Spirit is the Root of Evil not the Body! March 25, 2015 Artur Rosman

March 25th is the Feast of the Annunciation. This commemorates the day when God took on flesh and made a mess of human thinking on a lot of topics. For much of ancient thought the body was the seat of evil. The goal was escaping the body into the realm of pure spirit where you could enjoy your soul in peace from all those horrible distractions caused by the body.

Christianity took all that and turned it upside down. Here is Fabrice Hadjadj from an extended interview I’m translating for Ethika Politika’s Rabelaisian Catholicism talking, in the context of John Paul II’s theology of the body, about the transvaluation of values effected by Catholicism:

It is true that atheism is considered to be a great evil, but is it really the greatest evil? I came to the conclusion that no it is not, since it is obvious that demons are not unbelievers: the demons believe and tremble (James 2:19). The Devil knows that God exists, is certain about the veracity of all the articles of faith. This means that our foe—and he is the greatest—is not an atheist. Certainly he fuels atheism, he exists in a certain form of atheism, which consists in living without God, but he is not an atheist on the theoretical level.

This was my first conclusion. This is why I attempted extend my reflection to go beyond unbelief. Such an approach seemed interesting to me, because when we stop treating atheism as the only figure of evil, then we begin to realize that there are others, for example, deism, fundamentalism, and Phariseeism. The second conclusion of the book is connected with the topic of The Depths of Sexuality. Well, our enemy not only is not an atheist, but also has no body. A demon is an angel, “a pure impure spirit.” Thus evil does is not first located in the body, but is instead connected to the spirit.

If there is sin, then that is because there is intelligence, and because the will exists. Here is what I wanted to say with this: Do you think that your foe is an atheist or that the body is something dangerous? No, because perhaps spiritualism is the greatest evil and the root of all evil. The Catholic conclusion that the spirit  is on the side of evil is truly something amazing.

I think this is still shocking to us. It would be so much easier to scapegoat the body and escape into the realm of the pure spirit. But it turns out there would be something demonic about such an escape.

Look for the rest of this interview on Rabelaisian Catholicism in Ethika Politika in the coming weeks.

Some habits of mind are difficult to destroy, but the body persists in its innocence:

For more from Hadjadj on the devil look here and here. There’s also a TOP10 list of recent books on heaven and hell you don’t want to miss. 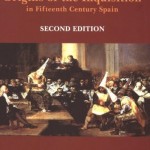 March 24, 2015
Netanyahu Understands the Inquisition Better than Zmirak (Who is Closer to Cruz)
Next Post 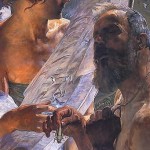 March 26, 2015 Daily Life in the Time of Jesus: Locust Eating 101
Recent Comments
0 | Leave a Comment
"Wait a minute, what am I missing? The host must contain some gluten, lest it ..."
RPlavo . The Surprising Anti-Capitalist Logic Behind the ..."
"Gluten intolerance is completely -- and I mean completely -- different from celiac disease. Many ..."
Bobby Lawndale The Surprising Anti-Capitalist Logic Behind the ..."
"Read Bruno's comment: #2 below your ranting comment."
Adrienne Szatkowski Michael Voris’s Stunning and Admirable Broken-Hearted ..."
"Science needs "a confession of sins and an articulate profession of faith"? Seriously?Certainly, individual scientists ..."
Elzbieta 2 Reasons Why the March for ..."
Browse Our Archives
get the latest from
Cosmos The In Lost
Sign up for our newsletter
POPULAR AT PATHEOS Catholic
1