Stanley Hauerwas is America’s theological gadfly. Short is the list of people who have not been offended by something said by  the Socrates of Durham (North Carolina). There is the infamous example of Hauerwas trying to find the library:

Stanley Hauerwas was at Harvard to deliver a lecture and, being there early and still needing to do some preparation, he set out to find the library. Not finding it, he stopped a student and asked him, “Excuse me, where’s the library at?”

Incredulous, the student responded, “Sir, at Harvard we don’t end our sentences with a preposition.”

Stanley paused for a moment and then rephrased his question in a more grammatically appropriate manner: “Where’s the library at, asshole?”

More seriously, like the Athenian original, Hauerwas does not offend just for the hell of it (unless he does). He usually has a point.

For example, in books such as Resident Aliens: Life in the Christian Colony—where he riffs on his best buddy Alasdair MacIntyre long before Rod Dreher’s Benedict Option–he redirects Christians away from the Culture Wars and makes them look hard, real hard, at their personal-cum-ecclesial failures instead.

Now, for all intents and purposes, gay marriage is probably a fait accompli as Jody Bottum has controversially argued. Still, if the Supreme Court decides in favor of redefining marriage, then it will not be an ontological disaster as Rod Dreher argued eloquently, if not entirely convincingly here:

They were right, and though the word “cosmology” may strike readers as philosophically grandiose, its use now appears downright prophetic. The struggle for the rights of “a small and despised sexual minority” would not have succeeded if the old Christian cosmology had held: put bluntly, the gay-rights cause has succeeded precisely because the Christian cosmology has dissipated in the mind of the West.

Same-sex marriage strikes the decisive blow against the old order. The Nation’s triumphalist rhetoric from two decades ago is not overripe; the radicals appreciated what was at stake far better than did many—especially bourgeois apologists for same-sex marriage as a conservative phenomenon. Gay marriage will indeed change America forever, in ways that are only now becoming visible. For better or for worse, it will make ours a far less Christian culture. It already is doing exactly that.

The SCOTUS decision in favor of gay marriage will not be a cosmic disaster, because the cosmic blow came for America in ’69 (no pun intended) when California pushed through a policy of untying the knot, no-fault.

In the essay, “Why Gays (as a Group) Are Morally Superior to Christians (as a Group)” [see: The Hauerwas Reader], we find Hauerwas once again putting on the mantle of a Socratic asshole.

According to him, heterosexuals have made such a mess of marriage that they no longer know what it is they might want to deny to gays. They only know denying it will therapeutically help them feel morally superior:

As a society we have no general agreement about what constitutes new intersections marriage and/or what goods marriage ought to serve. We allegedly live in a monogamous culture, but in fact we are at best serially polygamous. We are confused about sex, why and with whom we have it, and about our reasons for having children.

This moral confusion leads to a need for the illusion of certainty. If nothing is wrong with homosexuality then it seems everything is up for grabs. Of course, everything is already up for grabs, but the condemnation of gays hides that fact from our lives. So the moral ‘‘no’’ to gays becomes the necessary symbolic commitment to show that we really do believe in something.

Hauerwas is himself once-divorced so it’s not like he throws around these arguments lightly. As he argues in the interview “Faith Fires Back,” his arguments stem from identifying a culture-wide confusion about what Christian marriage has meant, means, and will continue to mean:

When couples come to ministers to talk about their marriage ceremonies, ministers think it’s interesting to ask if they love one another. What a stupid question! How would they know? A Christian marriage isn’t about whether you’re in love. Christian marriage is giving you the practice of fidelity over a lifetime in which you can look back upon the marriage and call it love. It is a hard discipline over many years.

The difficulty, therefore, is that Christians, when they approach this issue, no longer know what marriage is. For centuries, Christians married people who didn’t know one another until the marriage ceremony, and we knew they were going to have sex that night. They didn’t know one another. Where does all this love stuff come from? They could have sex because they were married.

Now, when marriage becomes a mutually enhancing arrangement until something goes wrong, then it makes no sense at all to oppose homosexual marriages. If marriage is a calling that makes promises of lifelong monogamous fidelity in which children are welcomed, then we’ve got a problem. But we can’t even get to a discussion there, because Christians no longer practice Christian marriage.

This all circuitously brings us back to Michalski’s arguments about Nietzsche featured in yesterday’s post. Michalski’s book The Flame of Eternity has one of the best explanations of what Nietzsche’s death of God really means:

First, let’s try to deal with what it might mean for God to be “alive.” When does God “live”? One can surely say that “God is alive” when belief in God organizes human coexistence and determines the meaning of human activities and, consequently, of the world to which those activities refer . . .

. . . Thus when Nietzsche is talking about the “life” or “death” of God he does not mean the existence or nonexistence of some supernatural or otherworldly being. Accordingly, the death of God is not something that happened to such a being and is not, in this sense, an “event.” Rather, Nietzsche is concerned with the order we strive to impose on the world around us, even when we no longer believe in God’s existence, even when the Churches have lost their social significance.

But, if, as Hauerwas argues, not even Christians organize their marriages around God, but around personal preferences, vague notions of romantic love, and all the while divorcing like there’s no tomorrow, then Christian real-existing practices of marriage among Christians are another symptom of Nietzsche’s “death of God.”

I am ambivalent about recent discussions concerning gays in the military. I see no good reason why gays and lesbians should be excluded from military service; as a pacifist I do not see why anyone should serve. Moreover, I think it a wonderful thing that some people are excluded as a group. I only wish that Christians could be seen by the military to be as problematic as gays.

Might we say that gays (as a group) still remain morally superior to Christians (as a group) by being, for the most part, excluded from marrying?

One can only wish that Christians would see marriage as being problematic and broken . . . by themselves, and the divorce culture they’ve helped to create by abandoning Christian practices of marriage a long time ago.

The relevant punchline from Hannah and Her Sisters, uttered by Mia Farrow, comes in at around 2:10 of the following video:

If you want to read more about Hauerwas look no further than Stanley Hauerwas Contra the Bad Idea of Religious Toleration.

See also: my post on why gay marriage is not a liberal cause. It is a conservative and Catholic cause, which doesn’t necessarily say much for the coherence of Catholicism and conservatism (or as MacIntyre calls it “conservative-liberalism”) in practice. 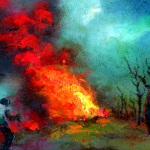 April 28, 2015
Nietzsche's Flame of Eternity: It's Not a Wonderful Philosophy Nor Life
Next Post 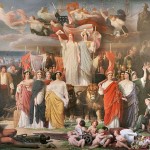 April 30, 2015 Stanley Hauerwas Contra the Bad Idea of Religious Toleration
Recent Comments
0 | Leave a Comment
"So you in fact did not vote for the lesser of two evils but instead ..."
gethoht Hunter S. Thompson’s Fear and Loathing ..."
"Wait a minute, what am I missing? The host must contain some gluten, lest it ..."
RPlavo . The Surprising Anti-Capitalist Logic Behind the ..."
"Gluten intolerance is completely -- and I mean completely -- different from celiac disease. Many ..."
Bobby Lawndale The Surprising Anti-Capitalist Logic Behind the ..."
"Read Bruno's comment: #2 below your ranting comment."
Adrienne Szatkowski Michael Voris’s Stunning and Admirable Broken-Hearted ..."
Browse Our Archives
Related posts from Cosmos The In Lost