René Girard: Is Christianity a Myth?

I spent an afternoon, and the better part of the evening, in the ER yesterday. The whole episode started with an episode of internal bleeding first observed on the porcelain throne. I’ll spare you the details.

All I’ll say is that the bleeding hidden within my innards since Goodness knows when escaped the probing of the doctors. I’ll need to go back for further testing.

Now, Rene Girard caused a furor when his probing book-length interview, Things Hidden Since the Foundation of the World, was published in France. In it he outed himself as a (GASP!) Catholic Christian. He lost a big chunk of the readership he gained with the publishing of Deceit, Desire, and the Novel, where he first articulated his theory of desire, and then capped it off with Violence and the Sacred, which ties mimetic desire to his theory of scapegoating (thereby articulating what’s been called the first truly secular account of religion).

What exactly does Girard mean by mimesis? There’s a great article he wrote for First Things entitled “Are the Gospels Mythical?” Here’s how he summarizes it:

The traditional English translation of stumbling block is far superior to timid recent translations, for the Greek skandalon designates an unavoidable obstacle that somehow becomes more attractive (as well as repulsive) each time we stumble against it. The first time Jesus predicts his violent death (Matthew 16:21–23), his resignation appalls Peter, who tries to instill some worldly ambition in his master: Instead of imitating Jesus, Peter wants Jesus to imitate him. If two [people] imitate each other’s desire, they both desire the same object. And if they cannot share this object, they will compete for it, each becoming simultaneously a model and an obstacle to the other. The competing desires intensify as model and obstacle reinforce each other, and an escalation of mimetic rivalry follows; admiration gives way to indignation, jealousy, envy, hatred, and, at last, violence and vengeance.

Rivalries and their scandals lead to scapegoating and the temporary peace that follows upon it:

Since most human beings do not follow Jesus, scandals must happen (Matthew 18:7), proliferating in ways that ought to endanger the collective survival of the human race—for once we understand the terrifying power of escalating mimetic desire, no society seems capable of standing against it. And yet, though many societies perish, new societies manage to be born, and quite a few established societies manage to find ways to survive or regenerate. Some counterforce must be at work, not powerful enough to terminate scandals once and for all, and yet sufficient to moderate their impact and keep them under some control.

This counterforce is, I believe, the mythological scapegoat—the sacrificial victim of myth. When scandals proliferate, human beings become so obsessed with their rivals that they lose sight of the objects for which they compete and begin to focus angrily on one another. As the borrowing of the model’s object shifts to the borrowing of the rival’s hatred, acquisitive mimesis turns into a mimesis of antagonists. More and more individuals polarize against fewer and fewer enemies until, in the end, only one is left. Because everyone believes in the guilt of the last victim, they all turn against him”and since that victim is now isolated and helpless, they can do so with no danger of retaliation. As a result, no enemy remains for anybody in the community. Scandals evaporate and peace returns—for a while.

Christianity is not mythological, because the death of Jesus exposes the mythological mechanism of violence:

Instead of blaming victimization on the victims, the Gospels blame it on the victimizers. What the myths systematically hide, the Bible reveals.

This difference is not merely “moralistic” (as Nietzsche believed) or a matter of subjective choice; it is a question of truth. When the Bible and the Gospels say that the victims should have been spared, they do not merely “take pity” on them. They puncture the illusion of the unanimous victimization that foundational myths use as a crisis-solving and reordering device of human communities. . .

. . . In the Byzantine Empire, I understand, the Oedipus tragedy was read as an analogue of the Christian Passion. If true, those early anthropologists were approaching the right problem from the wrong end. Their reduction of the Gospels to an ordinary myth snuffed the evangelical light with mythology.

The Resurrection is essential for this vindication of victims, which debunks ancient (and modern) scapegoat myths:

The true Resurrection is based not on the mythical lie of the guilty victim who deserves to die, but on the rectification of that lie, which comes from the true God and which reopens channels of communication mankind itself had closed through self-imprisonment in its own violent cultures. Divine grace alone can explain why, after the Resurrection, the disciples could become a dissenting minority in an ocean of victimization—could understand then what they had misunderstood earlier: the innocence not of Jesus alone but of all victims of all Passion-like murders since the foundation of the world.

If this has piqued your interest then here’s Girard explaining some of this on video:

I have also written on Girard’s unique views on the source of anorexia and the problems legalizing euthanasia will inevitably cause. 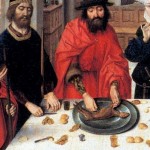 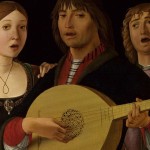 May 23, 2015 In Monologue: Did You Notice Atheists Don't Have No Songs?
Recent Comments
0 | Leave a Comment
"So you in fact did not vote for the lesser of two evils but instead ..."
gethoht Hunter S. Thompson’s Fear and Loathing ..."
"Wait a minute, what am I missing? The host must contain some gluten, lest it ..."
RPlavo . The Surprising Anti-Capitalist Logic Behind the ..."
"Gluten intolerance is completely -- and I mean completely -- different from celiac disease. Many ..."
Bobby Lawndale The Surprising Anti-Capitalist Logic Behind the ..."
"Read Bruno's comment: #2 below your ranting comment."
Adrienne Szatkowski Michael Voris’s Stunning and Admirable Broken-Hearted ..."
Browse Our Archives
Related posts from Cosmos The In Lost