Why is THIS Pope Francis’s Hardest American Saying?

The roundups of the papal visit are making the rounds everywhere. There’s much to celebrate, it seems much more to criticize (if you come from some Catholic circles), and too much material to read (most folks will TL;DR punt on this).

However the calculus comes out on the final analysis of the visit to America–and I’ll let someone else crunch the numbers–I’d like to stick, following Adorno, to the negative, the condemnatory, the judgmental, and harsh.

Don’t worry, it’s all in line with the spirit of the liturgy.

If you thought the second reading was harsh last weekend, leaving the congregation wondering  why they didn’t leave, then the Gospel was like a mallet striking a melon, or . . . a knife gouging out an eye, an axe chopping off an arm and a leg (Mark 9) . . . then here’s my unscientific roundup of the pope’s hard sayings.

First of all, there was the pope on abortion. He was harsh enough in his statements on the topic to satisfy the cravings of one-issue “culture of life” believers. Why? Planned Parenthood got enough of the message to cry “Damn your eyes!” to the pope.

The pope also walked the tightrope in his condemnation of American warmongering, just as John Paul II and Benedict XVI did:

A delicate balance is required to combat violence perpetrated in the name of a religion, an ideology or an economic system, while also safeguarding religious freedom, intellectual freedom and individual freedoms. But there is another temptation which we must especially guard against: the simplistic reductionism which sees only good or evil; or, if you will, the righteous and sinners. The contemporary world, with its open wounds which affect so many of our brothers and sisters, demands that we confront every form of polarization which would divide it into these two camps. We know that in the attempt to be freed of the enemy without, we can be tempted to feed the enemy within. To imitate the hatred and violence of tyrants and murderers is the best way to take their place. That is something which you, as a people, reject.

We, as a desert-storming, waterboarding, and Afghanistan-crushing people reject all this . . . Wink, wink, nudge, nudge, that’s Jesuit-sly dear pope!

The passage above is a wonderful example of Kierkegaardian indirect communication that escapes mimetic rivalries with those one criticizes, very much like what celebrate Catholic anthropologist Rene Girard constantly talks about. Note how the pope even uses the Girardian language of imitation, scapegoating, and revenge there; I’d be surprised if he hasn’t read him.

However, in my eyes, these two statements don’t win the prize. It’s what Pope Francis said in his sermon occasioned by the canonization of Junipero Serra (something that will require more commentary later) that disturbed me to my core:

Rejoice in the Lord always! I say it again, rejoice! These are striking words, words which impact our lives. Paul tells us to rejoice; he practically orders us to rejoice. This command resonates with the desire we all have for a fulfilling life, a meaningful life, a joyful life. It is as if Paul could hear what each one of us is thinking in his or her heart and to voice what we are feeling, what we are experiencing. Something deep within us invites us to rejoice and tells us not to settle for placebos which always keep us comfortable.

When Walker Percy praises depression as the only sane response to our crazy times, the pope’s sentiment seems 1 Cor 1:23 nuts. How am I to rejoice when I’m in between jobs with a family to support?

I’m frequently more on board with Joseph Brodsky when he says this in his poem “Letter to an Archaeologist” (from the collection To Urania):

Citizen, enemy, mama’s boy, sucker, utter
garbage, panhandler, swine, refujew, verrucht;
a scalp so often scalded with boiling water
that the puny brain feels completely cooked.
Yes, we have dwelt here: in this concrete, brick, wooden
rubble which you now arrive to sift.
All our wires were crossed, barbed, tangled, or interwoven.
Also: we didn’t love our women, but they conceived.
Sharp is the sound of pickax that hurts dead iron;
still, it’s gentler than what we’ve been told or have said ourselves.
Stranger! move carefully through our carrion:
what seems carrion to you is freedom to our cells.
Leave our names alone. Don’t reconstruct those vowels,
consonants, and so forth: they won’t resemble larks
but a demented bloodhound whose maw devours
its own traces, feces, and barks, and barks.

But I get it, there’s a reason why St. Paul “practically orders us to rejoice.”

Still, this is a very hard saying!

You might want to read about Alasdair MacIntyre’s equally nutty views on the revelatory power of disability.

See also whether Rene Girard agrees that Christianity is a myth.

Times is hard. Please donate if you can through my homepage PayPal button. 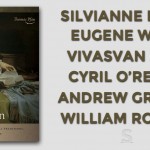 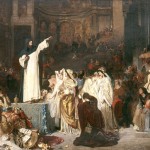 George Will and the Millstone of...
Catholic and Enjoying It!
Related posts from Cosmos The In Lost