Matthew Schmitz came up with a peculiar way of celebrating Banned Books Week. He devised a list of seven books that he thinks should be banned:

Free speech is not absolute. Our attempts to deregulate our public culture have only led to new and more bizarre restrictions on speech. Shedding restrictions on obscenity has only led to the more tyrannical notion of “triggering.” Abandoning standards for public decency has hastened the embrace of political correctness—a category even more susceptible to ideological control. Because words, ideas, and images all matter, humans cannot tolerate a total free-for-all. Pretending that they can has only led to irrational, back-end restrictions on speech that would have been unthinkable in earlier times. “Banned Books Week” only furthers our delusions that a laissez-faire approach to standards will allow excellence to thrive.

A better way to celebrate “Banned Books Week” is to draw up one’s own list of the books that should be banned if they could be banned.

You might remember that I’m a proud defender of the Inquisition, so this is right up my alley. Ill take up the Schmitz challenge!

I pretty much agree with his list, which includes obvious stuff like Ayn Rand, so I’ll go with some less obvious choices.

George Steiner puts the choice starkly in one of his best books Tolstoy or Dostoevsky. In all too brief outline: Tolstoy is the representative of harmony, whereas Dostoevsky represents tragedy. You have to choose one or the other. You cannot like both. I answer with a question: How ya gonna keep ’em down on the Tolstoy farm once they seen Notes from the Underground?

2. Discipline and Punish by Michel Foucault

When I started in college a long, long time ago, in a not too faraway place, students used to carry around copies of Foucault and cited him as if his words had more authority than the Holy Scriptures do for fundamentalists. It got old very quickly.

3. The Road to Serfdom by Friedrich Hayek

This book inspired a whole generation of Neo-Conservative economists to slash government protections against corporate abuses. Maggie Thatcher carried a copy of the book with her (granted, with no indication of having read it). What other justification do you need? Even worse: late in life Foucault showed affinities toward this variety of neoliberalism.

4. The Republic by Plato

Clearly a totalitarian who was in favor banning not only individual books, but also whole genres (poetry). Let’s give him a taste of his own pharmakon.

Bonhoeffer’s notion of “religionless Christianity” spawned a whole generation of incoherent theological ideas such as the death-of-God theology and the earlier writings of Harvey Cox. I know it’s not his fault, but if they shall be known by their fruits . . .

Why read C.S. Lewis when there are serious theologians to read? Who got time for DAT?

“What we cannot speak about we must pass over in silence.”

Your wish is granted, Ludwig.

Robert Lowell was so depressed he started the horrible genre of confessional poetry that made everybody with an English degree howl about daddy for a whole generation. What’s worse, reading Lowell in grad school was so depressing it sent me on a bender once. Thank Goodness I didn’t end up in a taxi heading to the airport.

The master of Being and Time drops golden nuggets like, “If you see a light in my office at exactly 9 P.M., you can come” [actual quote from the correspondence]. Best avoided, unless you’re creepy.

10. The Maximus Poems by Charles Olson

So bad I stabbed my copy with a pen. Even worse? I struck it so hard the pen went through half the book. Concealing all this from the used bookstore book buyers was very difficult.

11. Romeo and Juliet by Shakespeare

T.S. Eliot thought this Shakespeare’s greatest failure, because people think R&J is a commendable tale of romance. I won’t even dignify this one with a cover or a hyperlink.

12 Odyssey and Iliad by Homer

Sets some really bad examples, “And we must beg Homer and the other poets not to be angry if we strike out these and similar passages, not because they are unpoetical, or unattractive to the popular ear, but because the greater the poetical charm of them, the less are they meet for the ears of boys and men who are meant to be free, and who should fear slavery more than death.” –Plato, The Republic

13. The Conditions of the Working Class in England by Friedrich Engels

He plagiarized a poor woman out of the history books. Anathema sit, lab-bastard!

15 The Wetness to Hope by George Weigel

A “historical account” that flooded a whole generation of Catholics with misinformation. It made them think St. John Paul the Great and the Church were gung-ho about American capitalism and militarism. It will take decades to undo the damage and dissent it caused.

If all that has you fired up, then check out my large selection of TOP10 booklists, especially the ones on the top living religious novelists and theology books that I’ve actually read.

Since you’re in a critical mood after reading this, you also won’t want to miss the TOP11 most important critiques of modernity.

Remember to be kind and drop coin into the wallet I carry near my behind–through the Paypal button on my homepage.

September 29, 2015
Why is THIS Pope Francis's Hardest American Saying?
Next Post 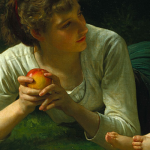 October 1, 2015 Newton's Apple and Other Myths About Science
Recent Comments
0 | Leave a Comment
"So you in fact did not vote for the lesser of two evils but instead ..."
gethoht Hunter S. Thompson’s Fear and Loathing ..."
"Wait a minute, what am I missing? The host must contain some gluten, lest it ..."
RPlavo . The Surprising Anti-Capitalist Logic Behind the ..."
"Gluten intolerance is completely -- and I mean completely -- different from celiac disease. Many ..."
Bobby Lawndale The Surprising Anti-Capitalist Logic Behind the ..."
"Read Bruno's comment: #2 below your ranting comment."
Adrienne Szatkowski Michael Voris’s Stunning and Admirable Broken-Hearted ..."
Browse Our Archives
Related posts from Cosmos The In Lost

Catholic
February 14th is a Very Problematic Holiday For...
Cosmos The In Lost
TRENDING AT PATHEOS Catholic