Remember when Easter sermons used to demand discipline of us? Yeah, me neither.

Pope Francis has encouraged preachers of the Church to be merciful above all as if there wasn’t anything more to Christianity.

Many say he’s taken it overboard. Where is the clarity and discipline of a Benedict XVI and John Paul II? Will the Catholic Church go the way of mainline Protestantism as so many professional prognosticators are prophetically predicting?

When I read sermons like the one below from a liberal theologian I throw my hands up in the air.

What’s the point of Lent anyway?

Where is the fiery preaching of old time preachers like St. John Chrysostom? The way to hell, it is well known, is paved with good intentions and extravagant mercy–like so:

It’s not hard to understand the prodigal’s brother when you hear such pointless permissiveness. Where would the Church go if everyone thought and taught like this? 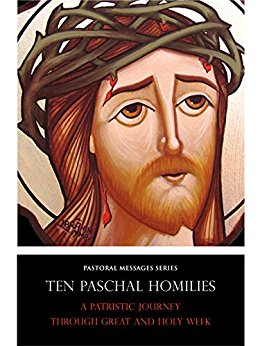 Well, for one, it would return to the glory days of St. John Chrysostom. This passage actually from a Paschal sermon attributed to him. What’s more, it is read at Matins in Orthodox churches on Resurrection Sunday.

I reference it because Eastern and Western Easter coincides this year.

One more little taste of Chrysostom’s merciful image of God:

And he shows mercy upon the last, and cares for the first; and to the one he gives, and upon the other he bestows gifts. And he both accepts the deeds, and welcomes the intention, and honors the acts and praises the offering. Wherefore, enter you all into the joy of your Lord; and receive your reward, both the first, and likewise the second. You rich and poor together, hold high festival. You sober and you heedless, honor the day. Rejoice today, both you who have fasted and you who have disregarded the fast. The table is full-laden; feast ye all sumptuously. The calf is fatted; let no one go hungry away.

Enjoy ye all the feast of faith: Receive ye all the riches of loving-kindness. let no one bewail his poverty, for the universal kingdom has been revealed. Let no one weep for his iniquities, for pardon has shown forth from the grave. Let no one fear death, for the Savior’s death has set us free. He that was held prisoner of it has annihilated it. By descending into Hell, He made Hell captive. He embittered it when it tasted of His flesh.

Let it be known that Orthodox in the pews and the monks of Athos would totally lose it over this sermon if, in alternative reality, everyone Eastern Orthodox didn’t know this text, and it was presented as written by modern Western theologian.

Please make a donation to this blog through the button on the upper right side of this page to help keep it going. 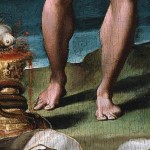 April 15, 2017
Why Yes, The Vatican Museums Are Actually Taking Donations of Blood Money
Next Post

April 19, 2017 How Did the Resurrection Historically Affect Reason?
Recent Comments
0 | Leave a Comment
Browse Our Archives
Related posts from Cosmos The In Lost