Comprised of Destiny Herndon-De La Rosa and Kristen Walker Hatten, New Wave Feminists takes a thick-veined, iconoclastic, jocular approach to pro-life feminism. Together they write, give public talks, create videos, and take to social media to offer support for women and fight the belief that women must settle for the redistributed oppression of abortion.

For the unfamiliar, I recommend watching their videos and then coming back to see how the meat is made.

Let’s start with the basics. Who are the New Wave Feminists?

Kristen Walker Hatten: New Wave Feminists is our attempt to rescue feminism and the pro-life movement simultaneously. Feminism lost its way a long time ago, but we aren’t ready to give up on it. And so many wonderful people have been doing great pro-life work for decades, but we saw the need for a new approach.

Were you two always feminist and pro-life?

Destiny Herndon-De La Rosa: I was always pro-life because my mom became pregnant with me at 19, living on her own in a very liberal college town. A lot of people probably thought I should’ve been aborted.

Kristen, what led you to change your mind?

KH: Reconnecting with a friend I hadn’t seen in a while. I saw she had a pro-life sticker on her car and I flipped out. To me “pro-life” was a dirty word synonymous with stupid and misogynistic. I accused her of selling out and not being a feminist anymore. She told me she had always been pro-life.

I was utterly shocked. She was someone I respected and knew was smart, sane and cool. I wanted to know her reasons, and for the first time I had an open mind. She talked calmly and logically. She didn’t mention her religion because I was hostile to Christianity at the time. She explained the human rights issue and ethical problem of abortion. I’ll forever be grateful to her for the way she talked to me. It changed my life.

This is why I always say carrying signs is cool, but you’re going to convert more people by just being a regular person in the world that people respect, who HAPPENS to be pro-life.

So is the calm, sane and cool approach what New Wave Feminist takes in conversations?

DD: Absolutely. Nobody wants to belong to a tribe of fanatical nutjobs. People in our generation want to be logical, smart and compassionate. Coincidentally, that describes 99% of the pro-life movement.

KH: The people we’re trying to reach—presentation is everything to them. If you come at them deadly earnest and hyperdramatic, they’ll roll their eyes. I would have. I probably still would.

Speaking of 99% of the pro-life movement, I’ve noticed you two aren’t rich old white men. Have you met any other women hiding in the flanks?

DD: Just the two of us. It’s awesome. We’re like queens.

Well, the pro-life movement does seem to be getting more diverse. Can you talk about that?

KH: I would wager that the majority is female, but pro-life leaders have been typically male. We’re starting to see a shift toward more women in leadership and it’s very important. The people who have abortions are more likely to be reached by women. Especially in the culture we’re trying to reach—the young women who hero-worship Lena Dunham won’t be converted by men.

Diversity is everything. It’s important this be seen as a human rights issue that attracts religious people, not the other way around. There is room in this movement for literally anyone who believes it’s wrong to kill an innocent human being. Also, the chick who converted me is a pagan lesbian now, and still pro-life so…

There are lots of closet pro-lifers out there. I have a gay liberal friend who works in the arts and doesn’t tell people he’s pro-life, because of the way the movement is perceived. Part of that perception is our fault and needs to be addressed.

DH: People are finally seeing that they can hold the belief and “fit into the movement” though, because now there are so many diverse people in leadership. Many have started their own groups, like Secular Pro-Life, Pro-Life Pagans, PLAGAL (Pro-life Alliance of Gays and Lesbians), and Humanists for Life.

Feminists for Non-Violent Choices, Rutger Hauer for Life… Much of your work consists of making sharp and really funny videos. Which is your favorite video so far?

KH: That’s hard. I’m currently in love with our undercover sting of a Pregnancy Resource Center.

DD: Of course we love Quinoa & Kombucha. So many fauxminists have thought through why they think abortion is necessary to steps A, B, and C. Quinoa & Kombucha are satirical characters that allow us to take their line of thinking to step Z.

KH: Humor is the most powerful tool the movement isn’t using. People are scared because it’s such a serious topic, but humor can be used in a way that doesn’t disrespect the victims of abortion, the woman and the child.

DD: The other side uses humor all the time. They have amazing PR. We need to watch what they’re doing and implement some of these tactics ourselves.

KH: We need to be “wise as serpents” about how we appear to the culture.

Pro-lifers get painted in all sorts of derogatory ways, as forced-birthers and so on. How many women have you forced to give birth, more or less?

KH: 76 women. I controlled their bodies using dark magic I learned from Voldemort.

DD: Kristen and I constantly work to make this very clear: We give ZERO craps about other women’s sex lives. ZERO.

What are your comedic influences?

KH: Oh man. Comedy has been my life since I was a kid. Monty Python, Carol Burnett, Lucille Ball, the old greats like George Burns and Bob Hope I loved when I was a kid.

What about your musical influences?

KH: We listen to a lot of hip hop when we’re together. Like, the opposite of feminism hip hop.

DD: We have our own “Crossroads” dance.

KH: It’s so choice. Give us wine and we’ll show you.

You celebrate when New Wave Feminists gets exposure, but I’ve also heard at least one of you eschew the title of Pro-life Celebrity. Is it because your insurance premiums would go up?

KH: Yes, my malpractice insurance is outrageous as it is.

DD: It’s because we have waaaay too much fun laughing about #prolifeleaders.

When we see people fawning over “prolife celebrities” it’s gross. Why’s that even a thing?!? Did they end abortion and we just haven’t heard about it? If not, then what are they so famous for, keeping abortion legal for the last 43 years? Nah… it’s weird.

KH: It’s great to have influence and change things for the better. But in the pro-life movement, as in any collection of human beings, there are cults of personality. We want to continually remind ourselves that we’re just people saying things on the Internet. I don’t want to ever get to a point where deep down inside a little piece of me wants abortion to hang around so I can be a #prolifeleader. Luckily, I have Destiny around to keep me humble by making merciless fun of me. (It’s her love language.)

If you had a wall on a busy street corner to write on, what would you say?

DD: …happily ever after in heaven with Biggie.

Thanks so much for taking the time you two. Now, if people want to keep in touch, where can they go?

KH: Best bet is Facebook.com/NewWaveFeminists, but we also have a website at newwavefeminists.com. And if anybody wants to send us advice, speaking requests, or large sums of money, they can email newwavefeminists@gmail.com Thank you, Greg!

Greg Camacho is a writer and showrunner for a local Catholic television show in San Antonio. And that’s all he has to say about that.

Destiny Herndon-De La Rosa lives in Richardson, Texas, with her husband and four kids. Her oldest son was a “crisis pregnancy” when Destiny was 16. He became the reason for founding New Wave Feminists. In addition to NWF, Destiny blogs for the Dallas Morning News.

Kristen Walker Hatten is Vice-President of New Wave Feminist, and lives in Dallas, Texas, with her husband. She is a Catholic convert and a redoubtable comedian, if you haven’t figured that out.

If you’re interested in the deep (and theological) history of the pro-life movement then see: The Roots of Protecting Life From Conception in the Catholic Enlightenment. 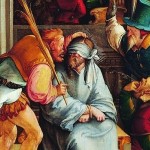 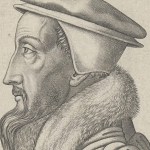 Trump Marches, Catholics Sell Out
Cracks in Postmodernity
Related posts from Cosmos The In Lost