Reflections of a Priest from India on the Consequences of White Privilege in America September 26, 2016 Guest Contributor

As I’ve remarked on occasion, I have social media “friends” of all kinds of political and religious backgrounds, though the majority are politically conservative and Roman Catholic. In some circles, it seems, talking about the reality of what is called “white privilege” in American society is treated with anger, derision, or worse. I find this truly puzzling, because, to me, the phenomenon is self-evident, or at least borne out by experience.

Acknowledging the subtle and pervasive ways in which our society treats the dominant cultural and ethnic group, and how we are all influenced by it, is not “liberal PC nonsense” or “cultural Marxism.” It is not an attack on any group. It is not an attack on the US. It is not denying the tremendous opportunity for self-advancement that still does exist in American society, which remains a magnet for people all over the world. It is not to deny the tremendous strides that have indeed been made in race relations, in attitudes, and more. It is not to induce guilt amongst whites, or to lay the blame on any one group or political party. It is not to deny that in some places poor whites are worse off than middle-class blacks in other respects. It is not to deny the tremendous socio-economic and cultural advantage that, say, Asian-Americans tend to have. It is certainly not to exalt victim status. It is not to deny anything else. It is to point out what, to me, appears to be a fairly objective reality of our society, and to reflect on the consequences of this, for weal or for woe.

And at some level, this tribal instinct is simply a reflection of human nature, and it has effects both good and bad, beautiful and ugly, and is especially visible when different “tribes” coexist, or try to. When combined, however, with the painful history, particularly of blacks in this country, it takes on, pardon the pun, a different hue. Acknowledging this reality, doing one’s best to be aware of it and to work against it, ought to be the task especially of Christians, and Catholics, who belong ultimately to Christ, in whom there is no longer Jew, nor Greek, slave nor free (Gal 3:28).

It is with these preliminary remarks that I share the following links, Jeremiah and the Enlightened Racist and White Like Me: On Privilege and Insulated Perspective, two pieces by David Mills, a former editor of First Things (that bastion of political liberalism!), plus this one What it’s like to be black in Naperville, America.

A personal anecdote: when I moved into my new parish in the summer, one evening around dusk, I decided to go for a Rosary walk. As I proceeded, the thought suddenly came to me, “You’re not in clerics. You’re in a new neighborhood where no one knows you. Is this wise?” Tall brown guy with a beard, walking around a neighborhood at dusk, seemingly aimlessly, muttering under his breath? Yeah, turn around. I finished the Rosary on the porch. This is not to accuse my neighbors of being mean or racist or bigoted. It is simply a function of being a member of one ethnic minority (in this case “potential Muslim” actually) in this society. It is not to claim that I was a victim, or even to imply that my human dignity was in any way deeply offended. It’s the small kind of calculus that one does often, that comes with being brown in America, or one kind of brown.

But as we all know, others have to do a whole different set of calculus, much more often, and the consequences can be very deadly.

Fr. Gaurav Shroff is a native of India, and grew up in both India and the United States. After graduating from Mt. St. Mary’s Seminary in Emmitsburg, he was Ordained to the priesthood for the Archdiocese of Atlanta in 2013.

Consider making a donation to this blog through the donation button on the upper right side of its homepage. We could definitely use your help. 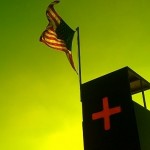 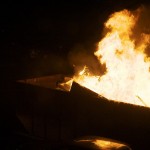 October 8, 2016 Will Priests For Life Pull Its $445,000 Out of the Trumpster Fire?
Recent Comments
0 | Leave a Comment
Browse Our Archives
get the latest updates from
Cosmos The In Lost
and the Patheos
Catholic
Channel
POPULAR AT PATHEOS Catholic
1

The Woes of “Matthew”—Jesus Wasn’t Nice!
Messy Inspirations
Related posts from Cosmos The In Lost

Seven to Seventy is the Way Home
I dreamed I was trying to get to Columbus. My first...
view all Catholic blogs
What Are Your Thoughts?leave a comment
Copyright 2008-2021, Patheos. All rights reserved.