“Merry Christmas and Happy Hanukkah from Priscilla, Max, Beast and me,” he wrote, naming his wife, daughter and dog. Then a commenter asked him: Aren’t you an atheist? 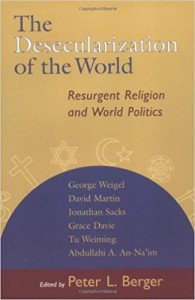 Zuckerberg identified himself as an atheist for years, but on Facebook on Christmas he wrote back: “No. I was raised Jewish and then I went through a period where I questioned things, but now I believe religion is very important.”

He has kept his religious identity secret. What’s most interesting about this is that the response, in a highly religiously pluralistic society (thereby traditional), has produced a lot of speculation about where, if anywhere, he might ultimately land:

He didn’t answer further questions about what he does believe in. Zuckerberg and his wife, Priscilla Chan, have publicly discussed their moral values frequently — including in a lengthy letter when their daughter was born a year ago, in which they pledged to donate 99 percent of their Facebook stock, which at about $45 billion at the time was one of the largest philanthropic commitments ever. And they’ve already met one of the world’s most important religious figures: Pope Francis, with whom they discussed bringing communication technology to the world’s poor.

Recommended reading: The Sacred Canopy and The Desecularization of the World by Berger;  The Myth of Religious Violence by Cavanaugh; Christianity in the West 1400-1700 by Bossy; The Structure of Scientific Revolutions by Kuhn; Remembering the Christian Past by Wilken; and Socrates and Other Saints by Karlowicz.

Here’s a video rundown of this bit of news, just in case you somehow inexplicably clicked on this post, didn’t read it, and scrolled all the way down to its conclusion:

Please consider making a donation to this blog through the donation button on the upper right side of its homepage, because it helps. A lot.

March 14, 2017
2017: The Year Your Sperm Stopped Swimming and Started Drowning
Next Post

March 17, 2017 The Myth of Secularization
Recent Comments
0 | Leave a Comment
Browse Our Archives
Related posts from Cosmos The In Lost