Praying is difficult to understand, because we are accustomed to using the wrong frames of mind to understand it. This is why critiques of modernity are so important in helping us gain access to realities, such as prayer, that have their roots in the premodern. Otherwise, what we do, and how we understand it, ends up looking like somebody trying to play American football using the rules of soccer (what the rest of the world calls “football”).

In the Protestant, and therefore secular, understanding of prayer the human doing the prayer is the subject, while God is a infinitely difficult object to reach object. God is Wholly Other, therefore the connection between him and sinful reality is extremely tenuous for the Protestant imagination. In the rare occasion when you get past God’s voicemail, you call that a miracle, which is something that’s by definition very rare.

But in God Still Matters Herbert McCabe not only reverses the subject and object in the standard equation of prayer, but, in a way typical for Thomism and the Catholic imagination, he removes the modern/Protestant/secular sense of rivalry between God, man, and the world: 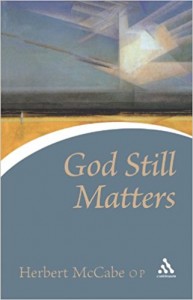 But all of this is to forget that it is God who prays, that my prayer is the action of God’s grace in me. My prayer is not putting pressure on God, doing something to God, it is God doing something for me, raising me into the divine life or intensifying the divine life in me. As Thomas Aquinas puts it, we should not say: “In accordance with my prayer: God wills that it should be a fine day”; we should say “God wills: that it should be a fine days in accordance with my prayer.” God brings about the prayer just as much as he brings about the fine day, and what he wills, what he has willed from eternity is that this fine day should not be so to say, just an ordinary fine day, it should be for me a significant fine day, a sign, a communication from God . . .

Thus, prayer here isn’t so much about changing God, as if the mind of Christ were external to us. Something very different is going on here, communion in the widest sense. God’s mind isn’t being changed, our minds are being changed through participation in God’s life. This isn’t strictly speaking about God (even though in a certain sense, not the commonplace, it is), but about us. God saves us, rather than out prayers somehow making corrections to Divine Providence (the very definition of pride!).

This is the reason why in God, Christ, and Us McCabe recommends a practice so frequently denigrated in our “spiritually advanced age,” that is, he recommends petitionary prayer: 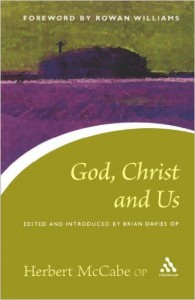 People often complain of “distractions” during prayer. Their mind goes wandering off on to other things. This is nearly always due to praying for something you do not really much want; you just think it would be proper and respectable and “religious” to want it. So you pray high-mindedly for big but distant things like peace in Northern Ireland or you pray that your aunt will get better from the flu–when in fact you do not much care about these things; perhaps you ought to, but you don’t. And so your prayer is rapidly invaded by distractions arising from what you really do want–promotion at work, let us say. Distractions are nearly always your real wants breaking in on your prayer for edifying but bogus wants. If you are distracted, trace your distraction back to the real desires it comes from and pray about these. When you are praying for what you really want you will not be distracted. People on sinking ships do not complain of distractions during their prayer.

The above advice seems to contradict what I said in my piece Don’t Give Up For Lent. But it doesn’t. McCabe’s advice goes against the grain of what we’d will to give up for Lent.

We tend to want to give up, and therefore obsess about, high minded “spiritual” things, rather than worldly stuff, since as good moderns we’ve always been told the two aren’t related.

Yet, what could be more contrary to that than instead turning to the humdrum desires of our everyday lives, which are actually where God wants to meet us–and save us from ourselves through ourselves? I can’t help but think this is related to a quip Walker Percy made in an interview with Robin Leary:

Personal goal: to survive my own bad habits.

Identifying the problem is the first step towards seeking help from the Divine Physician.

The Young Pope, which was reviewed in a guest post on this blog, really nailed this:

Please consider making a donation to this blog through the donation button on the upper right side of its homepage, because those insurance costs are scary.

March 27, 2017
Wendell Berry and the Given Life
Next Post

April 7, 2017 Syrian Catholic Bishops Unequivocally Condemn American Bombing of Syria
Recent Comments
0 | Leave a Comment
"So you in fact did not vote for the lesser of two evils but instead ..."
gethoht Hunter S. Thompson’s Fear and Loathing ..."
"Wait a minute, what am I missing? The host must contain some gluten, lest it ..."
RPlavo . The Surprising Anti-Capitalist Logic Behind the ..."
"Gluten intolerance is completely -- and I mean completely -- different from celiac disease. Many ..."
Bobby Lawndale The Surprising Anti-Capitalist Logic Behind the ..."
"Read Bruno's comment: #2 below your ranting comment."
Adrienne Szatkowski Michael Voris’s Stunning and Admirable Broken-Hearted ..."
Browse Our Archives
Related posts from Cosmos The In Lost