What is the History of the Coptic Christian Victims of the Egyptian Terrorist Bombings?

What is the History of the Coptic Christian Victims of the Egyptian Terrorist Bombings? April 9, 2017 Artur Rosman

Those Egyptians who remain Christian are known as Copts. Estimates of their numbers vary widely, from four million to twelve million, plus a diaspora in Sudan, Libya, and the West. Because of a split in the Christian Church in the fifth century over the nature of Christ, Copts have since then developed their own distinctive brand of Christianity, the Coptic Orthodox Church, under the leadership of the Patriarch of Alexandria. This Coptic form of Christianity spread south from Egypt to Eritrea and Ethiopia—and perhaps it once traveled north, too. When the Coptic leader (also called the “pope”) Shenouda III, the 117th Patriarch of Alexandria, consecrated St. Mark’s in 1979, it was then the only Coptic church in Europe. But it was not so much a new arrival as a return. An eighth-century Irish book of martyrs refers to “the seven holy Egyptian monks who lie in Disert Ulaidh.” Coptic monks such as those, who settled in Ireland, may have had some role in shaping the early Irish Church—which shared the Copts’ focus on monasticism, and their austerity.

I bet that’s something you probably didn’t know about Celtic spirituality. I should also add the obvious observation that the leader of the Copts was the first non-Western-European pope, long before Francis.

Heirs to Forgotten Kingdoms  continues its introduction to the Copts by distinguishing them from European Christians thus: 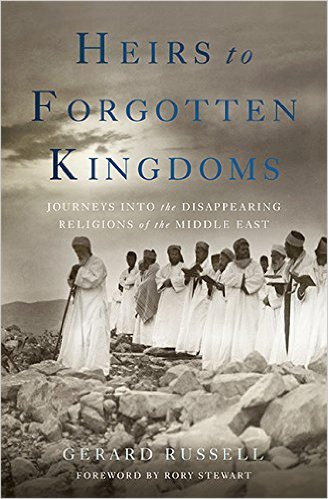 Another difference between Egyptian and European Christians is that the Copts have kept or even toughened many of the rules that European Christians have relaxed. The congregation at St. Mark’s had endured more than fifty days of the tough Coptic Lenten fast, during which they abstain completely from all fish, meat, and animal products such as milk and cheese. On Great Friday (called Good Friday in Britain and America) they eat nothing until sunset, and they pray all day: the service at St. Mark’s had begun at dawn, when a cross had been laid out in the aisle of the church and decorated with candles and roses. One of the prayers involved four hundred reverences (and although, for some, a reverence just meant a bow of the head, one man got down on the floor to prostrate himself). Even though they were living thousands of miles from their home, the Copts’ enthusiasm for their faith was undimmed.

According to Gerard Russell there is also a fascinating connection between the Coptic Christianity and Egypt’s rich religious history:

Much of what I could see in front of me—an elaborate screen separating the altar from the congregation, icons of St. Mark and the Virgin Mary—dated to the early centuries ad , when Christianity supplanted Egypt’s old polytheistic religion. But in the books helpfully placed in the aisles as guides to the service, I could see the church did not use either the Western calendar or the Islamic one sometimes found in the Arab world. Instead they used the calendar that the pharaohs would have known, with months called Baramouda, Kiahk (the “month when the spirits gather”), and Thout (named after the baboon-headed god Thoth). For that matter, the year was dated according to the Era of Martyrs, which starts in the Western year 284. This was when the emperor Diocletian massacred Christians—a persecution that is still remembered by the Copts. The style of the chanting in St. Mark’s that day would have been familiar to a Greek politician and scholar called Demetrius of Phalerum, who lived in Egypt’s coastal city of Alexandria in the third century BC. “In Egypt,” he wrote, “the priests, when they are singing hymns in praise of the gods, use the seven vowels, which they chant in a specific sequence; and the music made with these letters sounds so good that men prefer it to the flute and lyre.” So they do now. Oh-oh-oh, the priest and deacons sang, wavering on a sequence of notes, and then eh and ah, the consonants of the words hardly audible. This chant was the “Pek Ethronos.” It turns from sadness to joy at the prospect of the Resurrection, just as the ancient song on which it is based both mourned the pharaoh who had died and celebrated the accession of his successor. I was hearing the funeral music of the pharaohs in London’s leafiest streets.

Besides the chapter on the Copts Heirs to Forgotten Kingdoms also features chapters on the Mandeans, Yazidis, Zoroastrians, Druze, Samaritans, and Kalasha–all written with the same combination of careful scholarship, first-hand experience, and literary verve.

Heirs to Forgotten Kingdoms is a book that belongs on the bookshelves of everyone interested in the history of religion and contemporary conflicts in the Middle East.

Given the circumstances, I thought it appropriate to close this post with the following:

If you want more of the inside (his)story from Gerard Russell, then read How Did Disappearing Middle Eastern Religions Survive in the First Place?

Please make a donation to this blog through the donation button on the upper right side of its homepage in order to help keep it going.

April 14, 2017 It's a Good Friday to Leave Calypso's Island
Recent Comments
0 | Leave a Comment
Browse Our Archives
get the latest from
Cosmos The In Lost
Sign up for our newsletter
POPULAR AT PATHEOS Catholic
1

Is “The Chosen” Realistic to the...
Messy Inspirations
Related posts from Cosmos The In Lost