. . . He refuses to fight fire with fire, to destroy the pagan edifice of Rome with triumphalist Christian apologetic. Instead, he very deftly, very affectionately, and finally, very damningly, teases out the deep causes of Rome’s greatest successes and ultimate failures. Romans, said Augustine, desired the glory of their city above all other goods. “They were passionately devoted to glory; it was for this that they desired to live, for this they did not hesitate to die.” (Bettenson, City of God V.12, p. 197). The love of glory was the source of Roman triumph; Romans were trained to discipline all their other desires, to tame them and put them in service of this one highest good. It was the passion for the glory of Rome that nurtured Romans’ love of liberty and encouraged them to build a republic of renown. But in time, and, paradoxically, because of their success, Roman love of glory became a libido dominandi, a lust for domination. “When liberty had been won, such a passion for glory took hold of them that liberty alone did not satisfy – they had to acquire dominion.” (V.12, p. 198) And it was this relentless ambition for domination that would, in time, weaken the very heart of Rome. The greatest strength of Rome carried within it the seeds of its own failure. Setting their hearts upon a glory in this mortal life, the Romans got exactly what they longed for, and, in the end, this reward itself brought them down from within. Quoting Jesus, Augustine says, “I tell you, they have received their reward in full.” 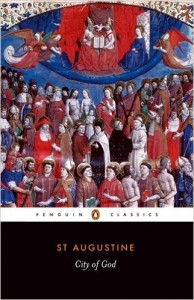 Perhaps it sounds like Christian triumphalism. But if Augustine is sure that “the bliss of a Christian emperor” is greater than his pagan predecessor because he is subject to God’s loving order, he is also quick to use the examples of Roman character to shame his Christian colleagues. If Romans could achieve so much in service of a worldly glory, why are we so slow to act in service of the eternal glory of the City of God? Augustine’s discussion of the cultural contradictions of Roman virtue is suffused with a deep love and tragic admiration, and he demonstrates again and again that, when we love a limited good as if it could last forever, we will fail. For Augustine, Christian Rome is no less subject to the same temptations and failings of its pagan ancestor. The only difference is that, in the light of providence, Christians (perhaps) have better tools to recognize the deep ambivalence in their loves and to work constantly to put them in service of the love that moves the sun and other stars.

In the face of the failure of a culture’s story, what is the best way to respond? David Brooks’ suspicion of universities is unfortunately predictable and short sighted, but he does have a point. Like Augustine’s disillusioned Romans, our intellectual leaders often have faced the collapse of the Western story with contempt and anger. It is certainly true that, in some corridors of our universities, we have torn down old institutions and demonized older values. But the politics of outrage have taken hold of both the left and the right. For every “tenured radical” on the left there is a Rush Limbaugh or Bill O’Reilly or Donald Trump on the right. Each side has its scapegoats; each side can claim certain victories. If the critical left is eager to tear down rather than repair, the reactionary right expends energy in the endless pursuit of “making America great again.” For all the noise, neither side can hear the voice of someone like Augustine, asking where our cultural contradictions lie, naming the good and the bad alike. 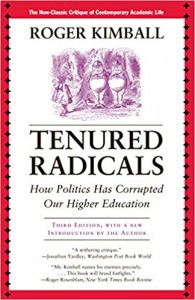 If we made a mistake, in the wake of the internal collapse of the Western Civ story, it was a failure of the tragic imagination. Tragedy means more than “a story ending badly”; instead, it is a vision of life that holds together the beauty and the failure of all our “human, all too human” endeavor. Augustine took a properly tragic view of classical Roman culture when he recognized that their failure had the same cause as their success, and he deepened that tragic sensibility when he turned those same critical questions upon himself and his own Christian culture. Rowan Williams says that “[t]ragedy typically leaves questions painfully open…” but “the challenge is not only how we speak without false consolation in a world like this but how we keep our culture alive to the fact that it is ‘a world like this.” (Williams, The Tragic Imagination, 3) To deny our fundamental disease and disorder is to make our sickness worse. For example, could it be that our decade of denial in the “nifty Fifties” itself intensified the violent disruption and upheaval that followed in the Sixties? And the critical narrative of the Sixties could only imagine overcoming the failures of the past by tearing down the institutions that embodied those failures. But the tragic imagination refuses to deny the pain and failure, not in the service of defeatism, but in the trust that there is something there, something suffering its own failure, that is worth saving, for all its faults. It may be that we ceased to pass on a story that we no longer believed, but did we thereby eclipse the tainted beauty and goodness that abided within the failure?

The West lost its story, not at the hands of the university professoriate, but in being forced to confront the long, bloody trail of its failures. We compounded the failure by imagining that we could simply exorcise the demons of the past and place the blame on the national, the religious, the traditional. We imagined that wickedness could be removed simply by subtraction. And now we find that the evils we thought to subtract will not just disappear; they will return with a vengeance. We are tempted to repeat the cycle, to go to war with our neighbor. Until we can see, with a right sense of the tragic, that our virtues and our vices grow out of the same soil, we will succeed only in making for greater rootlessness for all of us. In this, David Brooks and I agree: We need to relearn the story of Western Civ, because, for better and for worse, it is our story. But we need to tell a tragic story, both the better and the worse.

Kevin L. Hughes is professor with a joint appointment to the Theology and Religious Studies and Humanities departments at Villanova University. He is the author of Constructing Antichrist and Church History: Faith Handed On, along with articles appearing in journals such as Modern Theology, Theological Studies, Franciscan Studies, and the Heythrop Journal. He lives in Media, PA with his wife Bridget, a ceramic artist, and their three daughters.

If you really insist on diving deeply into the gory details of how Western Civ ruined itself, then look no further than the 11 Most Important Critiques of Modernity According to Thomas Pfau.

You really should also take a look at The West Was Never Western.

April 27, 2017
Post-Execution Church: Rise Up from the Electric Chair!
Next Post

I Looked Further into Hydroxychloroquine. Here...
Public Catholic
Related posts from Cosmos The In Lost

Spiritual Burnout
We've talked a lot in recent days about responding to God's call....
view all Catholic blogs
What Are Your Thoughts?leave a comment
Copyright 2008-2020, Patheos. All rights reserved.