Polytheism in the Bible 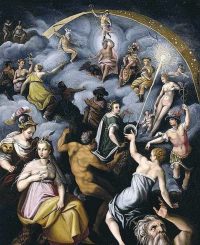 The first of the Ten Commandments says, “You shall have no other gods before me” (Ex. 20:3). (There are two very different sets of Ten Commandments in Exodus, but let’s ignore that for now.)

Have you ever thought much about the wording of this commandment? Why doesn’t it say that Jehovah is the only god? It’s because this section of the Bible was written in the early days of the Israelite religion (roughly 10th century BCE) when it was still polytheistic. The next commandment notes, “I, Jehovah, your God, am a jealous God”—jealous because there were indeed other viable options, and Jehovah insisted on a commitment.

I’ve gotten a lot of insight into Old Testament henotheism from Thom Stark’s The Human Faces of God. Some of what follows comes from chapter 4 of that book.

The Song of Moses (Deut. 32) is considered to be some of the oldest material in the Bible—dating to the mid-13th c. BCE. We have several somewhat-inconsistent copies, the oldest being from the Dead Sea Scrolls:

When Elyon divided the nations, when he separated the sons of Adam,
he established the borders of the nations according to the number of the sons of the gods.
Yahweh’s portion was his people, [Israel] his allotted inheritance. (Deut. 32:8–9)

Here we see Elyon, the head of the divine pantheon, dividing humankind among his children, giving each his inheritance. The idea of a divine pantheon with a chief deity, his consort, and their children (the council of the gods) was widespread through the Ancient Near East. Elyon (short for El Elyon) is the chief god, not just in Jewish writings but in Canaanite literature. The passage concludes with Yahweh getting Israel as his inheritance.

We learn more about terms like “sons of the gods” by widening our focus to consider Ugaritic (Canaanite) texts. Ugarit was a Canaanite city destroyed along with much of the Ancient Near East during the Bronze Age Collapse in roughly 1200 BCE, a period of widespread chaos from which Israelite civilization seems to have grown.

The Ugaritic texts state that El and his consort Asherah had 70 sons, which may be the origin of the 70 nations (or 72) that came from Noah’s descendants listed in Genesis 10.

The Old Testament is full of clues to the existence of multiple gods. Genesis is a good place to start.

We also see plural gods when Jehovah warns them that man mustn’t eat the tree of life (Gen. 3:22) and that they must confuse mankind’s languages lest their projects, like the Tower of Babel, succeed (Gen. 11:7).

A common Christian spin is either to say that the “us” is the Trinity or that it is a heavenly assembly of angels. But can we imagine that the original audience for Genesis would understand the Trinity? And why imagine an angelic assembly when the polytheistic interpretation of Genesis simply growing out of preceding Canaanite culture is available and plausible?

Psalms is another old book that has fossilized the earliest forms of Judaism. We see the assembly of the gods mentioned several times.

[Elohim] stands in the assembly of El; in the midst of the gods he renders judgment (Ps. 82:1).

For who in the skies can compare to [Jehovah]? Who is like [Jehovah] among the [sons of God], a God who is honored [in the great assembly of the holy ones], and more awesome than all who surround him? (Ps. 89:6–7)

And many more verses celebrate Jehovah while acknowledging the existence of others.

In a recent post, we’ve recently seen where Yahweh loses a fight with the Moabite god Chemosh (2 Kings 3:27).

We find one indication of the move from henotheism to monotheism in later versions of the Song of Moses (above). The phrase “sons of the gods” becomes “angels” in the Septuagint (3rd century BCE) and “sons of Israel” in the Masoretic text (7th through 10th centuries CE).

Deuteronomy was written after the conquest of Israel and before the conquest of Judah, in the 7th century BCE. The philosophy has moved from henotheism to monolatry. Like henotheism, many gods are accepted and only one is worshipped, but now worship of other gods is forbidden.

Do not follow other gods, the gods of the peoples around you (Deut. 6:14)

But you must not turn away from all the commandments I am giving you today, to either the right or left, nor pursue other gods and worship them (Deut. 28:14–15).

Second Isaiah was written later, near the end of the Babylonian exile. Here we read that the move is complete.

The very idea of an idol is lampooned in Isa. 44:9–20. Can a man cook his meal over a fire made from half of the tree he used to carve his idol and imagine that an idol from so unrefined an origin is really a god?

What explains this migration to monotheism? A major factor was the Babylonian exile. How could Yahweh, clearly defined as the most powerful of the assembly of gods, have been defeated by the puny Babylonian god Marduk?

Maybe Yahweh let it happen to teach Israel and Judah a lesson. Yeah, that’s the ticket! Babylon didn’t defeat Yahweh’s people; they were merely a pawn in his grand plan all along.

A decent provision for the poor
is the true test of civilization.
— Samuel Johnson

February 11, 2013
Atheists: What Would It Take to Change Your Mind?
Next Post