Patheos (& Other) Peeps: Chris Travis on How Our Insignificant Work Becomes Significant

On Fridays, I publicize work by other writers. I focus often but not exclusively on writers affiliated with Patheos, the religion and spirituality web portal that hosts my blog. Please share the love by reading these writers’ blog posts and books, sharing them via Facebook, Twitter, etc., and/or participating in online conversations with them. 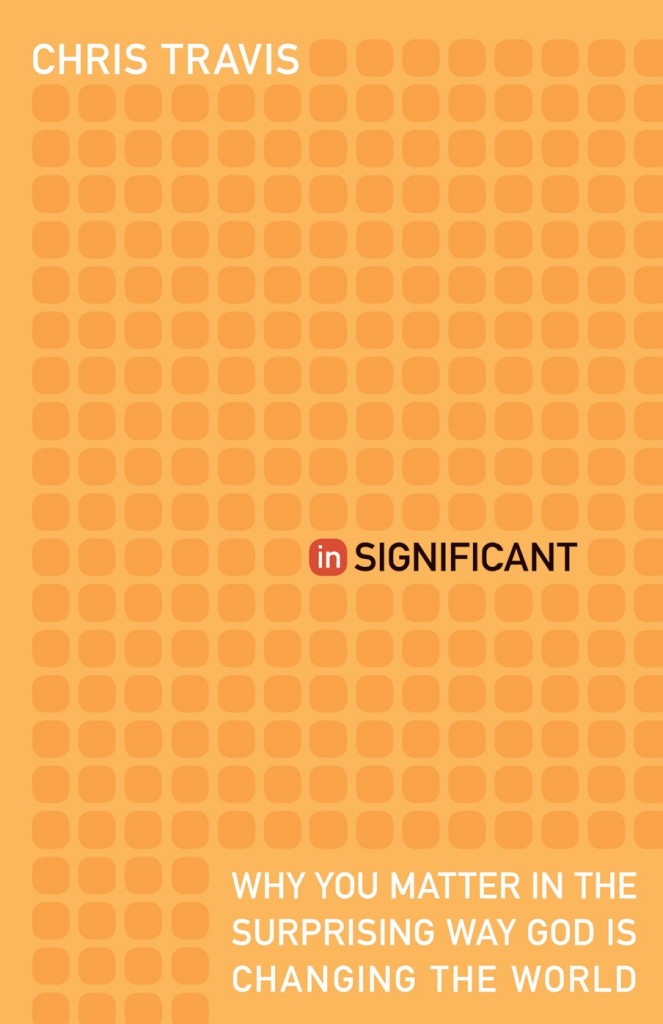 When I initially picked up Chris Travis’s slim little book, InSignificant: Why You Matter in the Surprising Way God is Changing the World, I thought to myself, “I know this guy.” Not that I know him, know him. I had never heard of Chris Travis before receiving a copy of his new book last week.* But I know people like him. Truth be told, I fell in love with a few guys like him back in the day. Energetic, outgoing types. Natural leaders and preachers and motivators. I confess I even rolled my eyes a little bit at the line in his author bio that describes Travis as having “taught math at the most dangerous middle school in the New York City public school system.” True or not (it is true), that detail seemed a bit much for a first introduction.

Oh dear, I wondered. Is this going to be one of those impassioned sermons about all the miraculous things that God does when we just put ourselves out there and perform big, dramatic gestures for Jesus and risk life and limb and livelihood in the name of serving God?

Because, see, I’ve spent the past twelve years performing small, tedious gestures, many of which go unnoticed even by those they are meant to benefit. The biggest risk I take most days is tiptoeing downstairs at 5:30 a.m., hoping no little ears hear my steps and follow me out of bed, thus robbing me of the brief alone time I require in the morning if I am to greet my children nicely. Every day for twelve-plus years I have made sure that one, then two, then three children have gotten sufficient calories, protein, and nutrients into their whiny, picky little selves. I have scrubbed pee and puke out of couches and carpets (did that just this morning, in fact, thanks to our puppy). I have spent entire afternoons in my minivan, picking up children here and depositing them there. I have come to despise the sound of my own voice, because it is so often used to remind my children of the same old stuff involving teeth brushing, butt wiping, homework, clean-up, dessert policy, and most of all, the whereabouts of their shoes.

In short, I have spent the past twelve years largely engaged in the small work of raising children. And when one hears about folks like Chris Travis doing big work, like teaching at the most dangerous middle school in New York City, one can feel a bit puny. Unimportant. Insignificant.

But wait a second, isn’t that the title of Travis’s book? InSignificant? That it is. And in the few hours it took me to read it (the book is not only short, but also nicely written and paced), Travis won me over with his story and his message.

His story: With plenty of math expertise but no teaching experience, Travis signed up to be a middle school math teacher through the New York City Teaching Fellows program. He ended up in a notorious school with the highest per-capita injury rate in the city (hence the “most dangerous” designation). His first year was a nightmare, in which he regularly cried (sobbed, wailed) in solitary moments, and got ready for work each morning thinking that he simply couldn’t do it. Couldn’t go there again, to the place where kids yelled obscenities at him and each other, where boys didn’t hesitate to proposition girls for sexual favors in the middle of math class, where Travis ended up with a facial injury after a class stampede.

Travis’s second year, though, was different. His classroom became known among students and teachers as an oasis of calm and safety in an otherwise chaotic environment. When Travis spoke, kids listened—even kids who weren’t his students. He ended up receiving the “Teacher of the Year” award.

What was the difference between year one and year two? Travis says it was God. He wanted to leave after his first year. He tried to leave, but his principal would not release him, because she was afraid (for good reason) that she wouldn’t find a replacement. So Travis stayed. And he changed the way he approached his work.

He had come to the school hoping to make a difference. Hoping to be significant. It soon became clear, though, that he wasn’t really going to make a difference. He wasn’t going to make the school less dangerous. Most of the kids in his classes were still going to do poorly on state exams. There weren’t going to be many (any?) inspiring stories of impoverished inner-city teens who embrace education as their salvation from the violent, chaotic life in New York’s worst housing projects.

Travis realized that he had to stop looking for significance and success in his teaching work. He had to get up every morning and go to work in that dangerous, sad place for one reason, and one reason only: For Jesus. Because God seemed to be making it crystal clear that Travis was supposed to be there.

At his lowest point, Travis contemplated whether doing this hard work with little hope of tangible reward, doing it only for Jesus, was enough.

Is Jesus enough? That question wrecked me. It haunted me. What if this was God’s will for the rest of my life? What if he wanted me to work at this little inner-city middle school in central Harlem, to be mostly miserable and ineffective, and to rarely ever see any reason to believe I was making a difference? Was Jesus enough for me? It took me about a year to answer that question….God was reversing all my ideas about significance and clarifying in me a simple conviction: There is one thing we can do with our lives that is so significant, everything else is insignificant.

That one thing is to follow the great commandment: To love God and love others—and to do so without hope or expectation of particular successes or rewards. To do it just because that’s what Jesus told us to do.

In embracing this new vision, Travis had a completely different experience in his second year of teaching. He developed a tone of voice and facial expression that got the kids’ attention and made them do as he said. He had regular experiences of being moved to do or say just the right thing at the right time to de-escalate a dangerous situation. The paradox, of course, is that by letting go of the expectation that he would make a difference, Travis began to make a difference, even if it was only in the kind of environment his students could expect upon walking into his classroom.

So what is the message Travis hopes we get from his story? His message is that nothing we do in insignificant, if we do it with the motive of loving God and serving others, and for no other reason.

The message is pretty basic, very important, and Travis does a beautiful job of using his story to underscore it. The one aspect of his story that left me unsettled is that, in many churches, including the one where I spent my formative 20-something years, doing what Travis did—building relationships with marginalized people with no motive other than serving—is precisely the sort of act that is perceived as significant. Travis, to his credit, points out that anyone, from parents of young children to corporate bankers, can feel that their work is insignificant, and anyone can make that work significant by doing it always and only for God rather than our self-centered desires. But I was still left with the sense that Travis, by choosing dangerous and undesirable work in a troubled urban school, had chosen work that many Christians will perceive as more significant than, say, my work raising suburban children, or my husband’s work managing an Ivy League library.

I came to understand that God was calling me to motherhood while attending a church where people did big things for Jesus—things like leaving behind a solid medical practice to provide care for poor homeless men, or selling a comfortable suburban home to go live in a L’Arche community with people who have mental disabilities. Things like teaching in a substandard, dangerous school with little promise that you will change the sad trajectory of many poor kids’ lives. As I wrote in my book, “I was embarrassed by the mundane nature of [my call to motherhood] among so many Christian overachievers. Yes, God is calling me to wipe pureed plums off some kids’ chin while the rest of you are saving the world.”

Despite Travis’s effort to include parenting in his model of what makes our work significant, I still felt that I was reading the story of another Christian overachiever whose work dwarfs my petty, mundane life as a suburban mother and housewife. I offer this observation not as a critique, because I really liked this book and trust Travis’s authorial motives, but as unsolicited advice for Travis as he shares his message. To him I would say: There will be people, like me, for whom immersing ourselves in a school like the one you describe sounds like one of the more selfless and significant things a Christian could do. Folks like me probably need to hear a few more times, in a few different ways, the message that our work can be significant too, if we do it for the right reasons.

Connect with Chris Travis on his blog, or better yet, buy the book!

*Disclosure: I received a free copy of the book for review purposes as part of the Patheos Book Club.

If it's violins she loves, let them play
Here is your open thread for February 16, 2020. Talk amongst yourselves.
view all Progressive Christian blogs
What Are Your Thoughts?leave a comment
Copyright 2008-2020, Patheos. All rights reserved.