Iconic religious images affect the attitudes of Protestants, but not Catholics.

The Christian God comes in different flavours. Most notably, while it’s sometimes portrayed as a benevolent, forgiving entity, at other times the imagery is of a vengeful, retributive god.

We already know that how Christians view their god is related to other aspects of their psychology (for example, fear and anxiety). But is this cause or effect? It’s hard to say, because what hasn’t been much investigated is whether implanting different ideas about God can change attitudes.

Kathryn Johnson and colleagues from Arizona State University showed religious imagery (like the pictures above) to 363 Christian students (120 Catholics). One quarter of them were shown images of a Authoritarian God (like the leftmost one above, described in an earlier pilot study as “punishing”or angry) while one quarter were shown images of a Benevolent God (middle image, described as “loving”, “compassionate”, and “forgiving”). The others were shown spiritual images (llike the one on the right) or abstract art.

They students were told that they were taking part in a memory test, and that while they were waiting for the recall challenge they would be doing a ‘filler’ task. In this filler task, they were given a couple of scenarios to read, and then asked about anger and forgiveness. For example, in the first they:

…were told to imagine themselves at a party at which a same-sex student carelessly spills a drink on them without apologizing. They were asked to rate (on a 7-point Likert scale) the likelihood of engaging in eight aggressive behaviors toward this person.

And a second one,

in which a friend offers, but then carelessly fails, to deliver an important package to the post office, resulting in the loss of a job for the participant. Three items measured willingness to forgive, forget, and help the friend in the future (e.g., how likely would you be forgive your friend)

Unfortunately the researchers don’t reveal whether Catholics or Protestants were the most angry or forgiving. But they do say that the Catholic responses were basically the same regardless of the kind of god they had been shown. 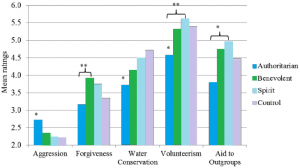 Among the Protestants, however, it was a different matter.

Protestants shown an authoritarian god were more aggressive and less altruistic (see graphic). On the other hand, showing the benevolent god, or spiritual images, to Protestants seemed to make them more forgiving.

This is one of only a few studies to use religious imagery to provoke a psychological response, so the fact that Catholics and Protestant responded differently is very interesting. The authors suspect that the difference occurred because Catholics are regularly exposed to such imagery, and so they may have become somewhat immune to it.

They do also point out that, because there were fewer Catholics in their study, the power to detect an effect was lower – they may have just lucked out. And they float the suggestion that maybe other images would maybe have more effect on Catholics – images of the Virgin Mary, for example (that’s what was used in a 2008 study of religiously-inspired pain relief in Catholics).

So, coming back to the original point, regarding cause and effect. Well, it seems that for Protestants at least, yes – the particular kind of god they believe in seems to be fairly easily manipulated!

March 10, 2013
Calvinists can wait, but Catholics live for the moment
Next Post

March 24, 2013 In West and East, it's easier to remember things that are a bit weird
Recent Comments
2 Comments | Leave a Comment
Browse Our Archives
Related posts from Epiphenom