Religious authority increases the number of donations but decreases the value

Religious authority increases the number of donations but decreases the value March 31, 2015 Epiphenom

In a run-down market place in Kabul, Afghanistan, groups of men hang around hoping that someone will offer them a job for the day. But today is different. Today they get an unusual offer.

Somebody is willing to pay them a whole days wage (about $9) just to fill out a survey. Of course, many agree, and are taken by bus to the survey station. Once the survey is complete, they get handed their money in a blank envelope.

Before they go, a guy comes in and makes an appeal to their charitable nature. He wants them to donate to a well-known charity that provides hospital care to the needy. All they need do is take the money they want to keep out of the envelope, leave whatever they want inside, and drop it in a box in the way out.

That little story relates an experiment that actually took place. OWhat the experimenters (Luke Condra and Sera Linardi, University of Pittsburgh, and Mohammad Isaqzadeh of the University of Afghanistan) were interested in was not the survey results, but rather how much their subjects decided to leave to charity.

What they found was quite remarkable. 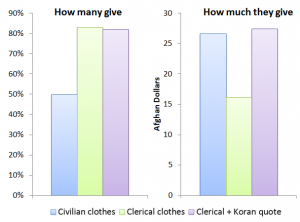 When the appeal was made by a guy wearing clerical attire, more people donated. But the average value of the donations actually went down. What happened was that many people made the absolute minimum donation possible (a 10 Afghani note).

The overall effect was that the total value of the donations remained exactly the same.

When the quote from the Koran was added to the appeal, the value of the donations went back up again, and the percentage of people donating remained high. So the total value of donations increased.

This is important because it’s been found before that subtly reminding people about religion makes them more charitable. But the reason for this was never quite clear.

Is it because people are reminded that God is watching them, so they make token gestures towards being nicer? Or is it because they are genuinely motivated to altruism?

These results suggest that the feeling of being watched by God is important. That certainly chimes with other research on the topic.

The problem with this is that it encourages people to fulfil the letter, but not the spirit, of religious law. As the researchers write:

We interpret this reaction as a form of legalism, common to many religions, whereby the individual feels compelled to give by virtue of the clergy’s recognized ecclesiastical authority, but bridles against the clergyman’s exercise of power and negatively responds by decreasing the amount given.

Adding an appeal to the goodness of charity reversed that effect. If people are  reminded about why they should give, they readily respond. The unresolved question is: are secular appeals to charity just as effective?

The researchers found something else interesting. The effects they saw were entirely due to the subjects who felt poor relative to their neighbours.

All these people were poor. But those who felt relatively poor were far more susceptible to the influence of religion.

Now, this is an area that’s particularly interesting to me – in fact, they cite my 2009 research paper as a motivation to look at this aspect themselves. Since then there’s been plenty more evidence to back that up.

It’s always nice to see evidence from an unexpected angle to support the idea that religion and personal insecurity go hand in hand! 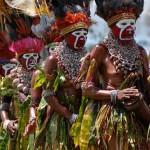 March 24, 2015
Did belief in ghosts help kick-start civilization?
Next Post

Tim Keller Pushes the Myth of...
Roll to Disbelieve
Related posts from Epiphenom

Nonreligious
Planned Parenthood is disgusting? What does that even...
Epiphenom
TRENDING AT PATHEOS Nonreligious