The science is in, and God is not the answer

The Canadian news and current affairs magazine Maclean’s has just run a glowing article claiming that science says ‘God is the answer’ to teen anxiety and health problems. It’s basically a promotional piece for a new book by Lisa Miller, Director of Clinical Psychology at Columbia University’s Teachers College.

To give you a flavour of the article, take a look at these excerpts:

The evidence for a personal religious advantage is overwhelming, Miller claims, drawn from literally “hundreds” of epidemiological and longitudinal studies. In a 2002 article published in the Journal of the American Academy of Child and Adolescent Psychiatry, data taken from a 1995 survey of 3,300 teen girls in North Carolina showed that higher frequency of prayer or meditation correlated with decreased risk of depression. It’s worth noting that the advantage was conferred by individual devotion rather than the degree to which the girls believed sacred writings were the literal word of God—spirituality, then, rather than religion.

But I think Lisa needs to get out more, because I’m sitting here in the UK, where fewer than 50% of people aged 16-24 believe in god or even a ‘spiritual higher power’ any more (and the number declines year on year). Yet here and in other, equally irreligious European nations the kids seem to be doing OK.

In fact, although evidence from the USA links religiosity to mental benefits, in many places the direction of the link is exactly opposite. For example, here in the UK non-religious kids are the least likely to be emotionally disturbed. Incidentally, emotional problems peak in those with weakly held beliefs – more on that later.

In Chile, Estonia, The Netherlands, Portugal, UK, Spain, and Slovenia, spirituality has been found to increase the risk of depression, according to a study that followed 8318 patients without depression who had attended doctor’s surgeries. And evidence from elsewhere in the world shows that the link between religion and reduced risk of suicide is patchy at best. In South Africa, holding religious beliefs actually seems to increase the risk of suicide!

So clearly there’s something wrong here. How is it that Miller can make the claims she does? Well, in fact there’s not just one problem with the claims she makes. There’s a raft of them. The whole shebang is based on flawed concepts.

Miller is pretty clear in the article that it’s not religion, but spirituality, that’s important. So let’s start with what is actually meant by spirituality, because it’s a pretty nebulous term – and it probably doesn’t mean what you think it does.

For example, the Spiritual Well Being Scale (SWBS) is actually broken into two sub-scales, only one of which is to do with anything supernatural (‘Religious Well Being’ – finding strength and support from God) l. The other (‘Existential Well Being’ – feeling fulfilled and satisfied with life) is purely secular. Another commonly-used questionnaire is the Spiritual Well Being Questionnaire (SWBQ). Similar to the SWBS, it has several sub-scales – only one of which (the ‘Transcendental’ sub-scale) refers to faith in and relationship with someone or something beyond the human level. The other three scales refer to non-spiritual spirituality.

That’s important because, for example, a survey of 400 students at the University of Florida found that Existential Well Being, but not Religious Well Being, was a significant, independent factor decreasing the risk of suicide. And a survey of 320 school children found that Transcendental Spirituality was actually associated with less happiness.

This link between existential well being, but not religious or ‘higher power’ beliefs, is a common thread in several studies of this type. So if you see a claim about spirituality that does not specifically look into supernatural spirituality, you can pretty much exclude it as evidence for an effect of belief in a higher power.

Next, let’s talk linear regression (stick with me here). Most studies basically plot intensity of religious belief against happiness or whatever, and draw a line through the dots.

However, plenty of evidence suggests that the relationship is not linear. Those who are highly religious are indeed happy, but happiness decreases as religious fervour ebbs. It then turns up again for individuals of very low religiosity.

Recall the emotional problems of UK kids, that I mentioned earlier. The least and most religious kids had the fewest problems, and it’s a common finding. The happiest people are those at the two ends of the spirituality spectrum, and the unhappiest people are those with moderate religious beliefs. If you don’t take this into account, then you’re going to get screwy results.

What about religion and health?

Well, religious teens do drink less. But teens raised in the same home start drinking at similar ages, regardless of their personal religious beliefs – showing that it’s their family environment, and not their personal spirituality, that’s important.

Looking more broadly at overall health, it might surprise you to learn that nonreligious people are much more healthy than the religious. They have lower blood pressure, are leaner, and are less likely to be diabetic (they are, however, more likely to be smokers). And women who go to church or find comfort in religion are actually more likely to die or have a heart attack.

Why, then, do people keep saying that religion is good for your health? Well, the reason the non-religious are healthier is because they also better educated and wealthy – the kinds of people who take care of themselves. It’s only if you statistically control for this that religious believers are more healthy than the non-religious.

But an analysis of nearly 60 different studies found that this is entirely to do with attending religious services. There is no connection between the intrinsic aspects of religion (belief in a god concept, religious/spiritual well-being, religious/spiritual experience, and religious motivation/orientation) and health.

The health effects of religion really seem to come down to the social support. Data from the Health and Retirement Study, which has been following a group of 18,000 Americans since 1992, support this. People for whom religion was not important lived just as long as those for whom it was very important. What did matter were things like divorce and whether or not people went to church.

Religious people in the USA are happier than non-religious people, and happy people tend to be healthier – and it turns out that this explains a good chunk of the effects of religion on health.

Another thing to consider is that most studies of religion and behaviour require people to report their own behaviour. Yet we know that people – including religious people – tend to tell you what they want to believe about themselves.

So you need to be really cautious about surveys that ask religious people if they’ve been behaving in the way they are supposed to. If they feel social pressure to fudge the truth a little, they will – they’re only human, after all.

And here’s the final thought I want to leave you with. Just supposing the premise is right and religious believers are happier. Any conclusions about cause and effect are hopelessly confounded by self-selection.

What I mean is this. If you’re a sociable person in the USA, then you’re under tremendous pressure to also be spiritual. Spiritual people in the US get more social support – although that’s because, in the US, sociable people are more likely to spiritual.

But atheists in the USA are excluded from mainstream society.They are highly mistrusted. In fact, in popular perception (Canadian data this time) atheists are pretty much on a par with rapists.

So it’s hardly surprising that, in the USA, atheists are pretty miserable. In fact, research suggests that the stress of the life of an atheist shows up in brain scans.

But does this help explain why the alleged benefits religion seem to disappear in less religious countries?

It probably does. For example, religion doesn’t make the British happier. In fact, as a general rule, in countries where religious belief is not the norm, religious believers are no happier than the non-religious. It seems that being religious can lead to more social recognition, in turn leading to more happiness. That effect is much stronger in the more religious countries.

And that has effects. Not only does it impact the happiness of atheists. It means that those who choose atheism in the USA are going to be people who have chosen to do without social support. It really happens that way – it shows up in statistics on personality differences.

The Maclean article poses this question:

Research shows kids raised with spirituality are happier and healthier in the vulnerable teen years. Why aren’t we all signing up?

Well I hope the answer is clear. It isn’t religion that has this effect – except insofar as as it make atheists unhappy.

If we really want happy and healthy kids (and adults), then we need to focus on the real issues: social support and social inclusion. 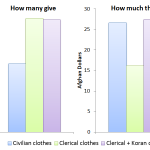 March 31, 2015
Religious authority increases the number of donations but decreases the value
Next Post 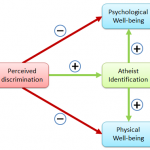