When it comes to religions, governmental regulation and social norms affect happiness

When it comes to religions, governmental regulation and social norms affect happiness May 27, 2014 Epiphenom 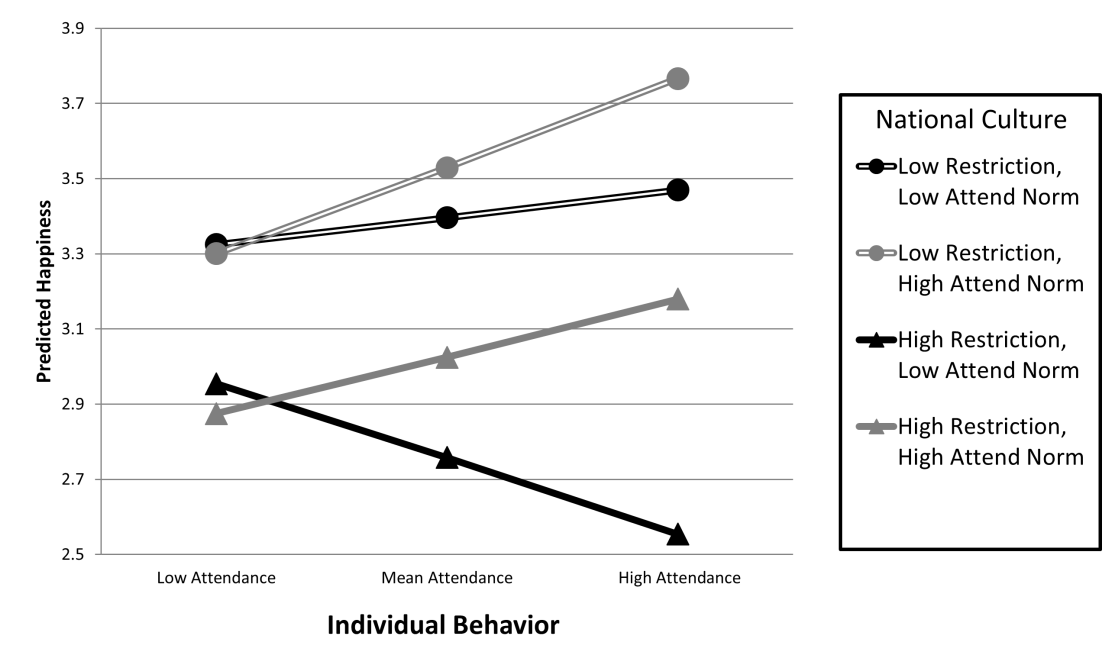 If you read the last post you’ll know that the relationship between religion and happiness is complicated. When you look around the world, religious people tend to be happier than non-religious people.

However, it’s not straightforward. The effect is bigger in some countries than in others. But why? Possibly part of the reason is that religion makes people happier in countries that are more religious, but there seems to be more to it than this.

David Hayward (University of Michigan) and Marta Elliot (University of Nevada) are interested in how governmental regulation of religion affects attitudes towards it. Previously they’ve shown that the more government regulates religion, the less people are satisfied with it. Perhaps this effect is important here. 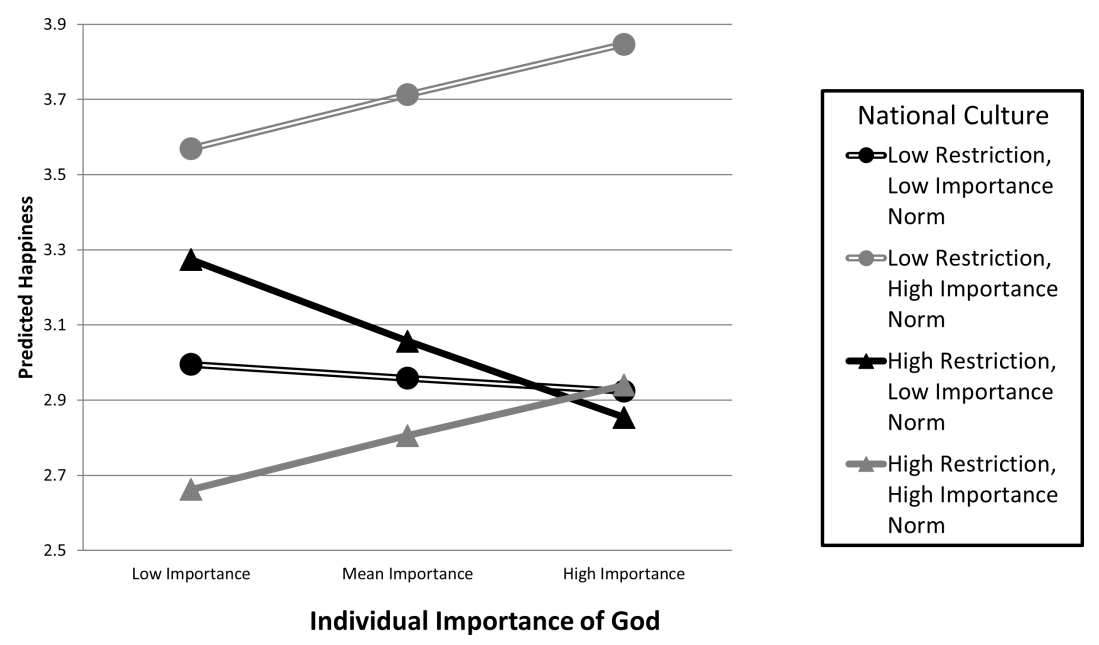 So they took data from the World Values Survey and created a model  to predict how happy people are in countries with either few or lots of religious people, and either little or lots of governmental regulation of religion. They found there was quite a strong interaction.

Take, for example, the top graphic. This shows that, as religious service attendance goes up (left to right), so does happiness – except in countries with high levels of religious attendance and strong governmental regulation of religion. In these countries, people who attend a lot of services are actually less happy!

The next graphic down shows basically the same thing, but this time looking at the importance of God in people’s lives. For people living in countries where most people are not interested in God, stronger belief doesn’t lead to more happiness, and actually leads to less happiness in countries where governments control religion.

Here’s what Hayward and Elliot conclude:

It is true that in most instances, religion and well-being are positively associated. However, the strength of the association tends to increase as religion becomes more normative, and overall levels of health and happiness are lower when government regulation is high. The magnitude of these effects varies depending on the facet of religion in question and the type of well-being outcome, but in general it appears that high regulation tends to intensify the contrast between the effects of fitting in with or deviating from the religious norms of the nation.

To summarise, religious people do tend to be happier (and healthier), but this is only really true in countries where there is freedom of religion, and many people are religious.

I’m sure you can think of many countries that are highly religious and where government sticks its nose in religious affairs. But you may be wondering which countries are non religious and also regulated? Well, these are the ex-communist countries, where the new governments tend to use religion as a political tool.

Incidentally, as well as looking at how the lines slope, it’s also interesting to look at who is happiest in each of these different circumstances. For example, in countries where most people think god is unimportant, the least religious people are, for the most part at least as happy as the most religious.

So, what do these results mean in context?

Well, previous research using the World Values Survey has shown that religious people are happiest in countries where there are lots of religious people (Eichhorn and Diener).  Also that being religious leads to more social recognition, in turn leading to more happiness – an effect is much stronger in the more religious countries (Stavrova).

It also seems that religious diversity is linked to unhappiness (Okulicz-Kozaryn).

When put together with this study, I would say that the overall pattern emerging is that the link between religion and happiness really seems to be about fitting in. The happiest countries are ones where everyone is highly religious, and it’s the same religion, and where the government doesn’t feel the need to interfere (presumably because the state and religion are aligned).

In other words, religion does lead to happiness, but the greatest effect is seen in conditions where everybody is of the same religion. A bit like things must’ve been in our tribal past.

But very rare conditions in the modern world!

May 20, 2014
Religion and happiness: maybe it's not a country-specific effect after all
Next Post

Why the Gospel Doesn't Work on...
Godless in Dixie
Related posts from Epiphenom