Spielberg out, Ang Lee in, for life-of-Moses movie? 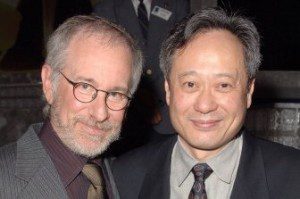 First Ang Lee won the Oscar for Best Director that many people thought Steven Spielberg would get last month; now there are rumours that Lee might direct the life-of-Moses movie that Spielberg has been attached to for over a year.

Deadline reports that Spielberg has decided not to direct Gods and Kings, the “epic-sized” Moses movie that Warner Brothers has been developing since at least 2010. Spielberg — who already alluded to the Moses story in Close Encounters of the Third Kind (1977) and Raiders of the Lost Ark (1981) before proposing that the first DreamWorks cartoon be The Prince of Egypt (1998) — was said to be “near commitment” to the project in January 2012, but apparently the deal was never finalized, and now never will be.

Deadline says the studio has since approached Lee, who is “intrigued with the project but hasn’t had a formal meeting on the script.”

The existing screenplay was written by Stuart Hazeldine (who co-wrote Warner’s aborted Paradise Lost adaptation) and Michael Green (whose credits include Kings, the short-lived TV show that re-told the story of Saul and David in a modern setting), and it has been described as “a Braveheart-ish version of the Moses story.”

Warner may need to act fast, lest they fall behind rival studio Fox, who have been developing their own Moses movie since at least 2009.

That movie now goes by the title Exodus and currently has Ridley Scott attached to direct — which is interesting, considering how skeptical Scott has been about religion in his films. (He’s definitely interested in religious themes, but he’s skeptical about religion in general, which raises interesting questions about how he’d approach a biopic about a figure who is central to three of the world’s largest religions.)

Deadline says the Fox movie is “gathering steam” and Scott wants to get that project up and running as soon as he finishes his current film, The Counselor — so, whether it’s the Fox project or the Warner project, it might not be too long before we get our first live-action Moses movie made for the big screen since the 1950s.

March 13, 2013
Multiple movies about the Resurrection still in development
Next Post

March 15, 2013 The Bible: second episode, first impressions
Recent Comments
0 | Leave a Comment
"This was a refreshing read. I'm an average fan of Hellboy but I'm also a ..."
Andrew Mathews Doug Jones on Hellboy and Christianity.
"Great interview! One thing I've wondered since watching Season 1 is why they didn't include ..."
A.J. Cattapan Interview: The Chosen writer-director Dallas Jenkins ..."
"Earth actually does exist in the Dark City universe. Early in the film when John ..."
Edward Clint Dark City and the ambiguous ending.
"I don't always agree with your opinions, but your reviews are never less than interesting ..."
Laura-Lee Rahn The top-grossing Italian movie of 2019: ..."
Browse Our Archives
Follow Us!