Creativity, conventions, and music in Noah and its trailers

Creativity, conventions, and music in Noah and its trailers November 19, 2013 Peter T. Chattaway 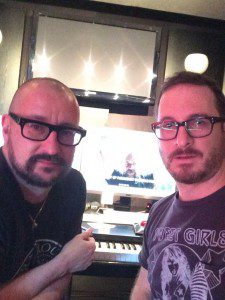 Ever since he burst onto the scene with his first feature film, the trippy low-budget math-and-mysticism movie Pi (1998), Darren Aronofsky has established himself as a director with a unique set of interests, and as a director who tends to push his visuals and his stories well, well beyond the limits of conventional filmmaking. Paramount Pictures, meanwhile, is a major studio that is in the business of keeping things as safe and conventional as possible, so as to attract the widest audience possible (just look at what they did to Star Trek).

So it came as no surprise that, long after Aronofsky teamed up with Paramount to make his first big-budget studio movie, the Bible epic Noah, rumours began to circulate that there was tension between the two of them over the final cut of the film. And it has been interesting to see how the studio’s promotional campaign for Noah has gone out of its way to make the film look as generic as possible, while adjusting its definition of “generic” to suit whichever audience a given trailer is intended for.

I mentioned a few weeks back that the trailer shown to religious audiences had gone so far as to put a praise-and-worship song on the soundtrack, as if to make the film look as generically Christian as possible. Well, now that the trailer for mainstream audiences is here, it turns out that this trailer uses a track from an outfit called Audiomachine to make the film look as generically epic as possible.

Who are Audiomachine? The Playlist explains:

The music in the first trailer is Audiomachine’s “New Beginning.” If it sounds like very trailer-like music, that’s because it is. Audiomachine are not a band so much and more of a boutique, motion picture advertising music production house, specializing in original music and sound design specifically engineered for the high end trailer market.

Not surprisingly, the trailer has worried some fans of Aronofsky’s, who fear that Noah will have none of the director’s singular style. Drew McWeeny, who has championed Aronofsky’s films in the past, wrote that the trailer “looked no different than most of the noisy blockbuster fare of the last decade,” and added:

There are so many things that are in the script by Aronofsky and Ari Handel that aren’t even hinted at in this trailer, and I get the feeling it’s because they’re still not quite sure how to explain the 18-foot-tall six-armed Watcher beasts or the way it turns into a family psychodrama while they’re all on the Ark. Instead, they’re selling spectacle, and the stuff with the generic Charging Crowd Exploding Battlefield footage and the Ark facing the turbulent CGI waters of “The Perfect Storm” all feel like they came out of a stock footage catalog from event movies since the year 2000. That’s the last thing I expected from a Darren Aronofsky trailer.

As McWeeny notes, there is ample reason to believe the film will be much stranger than the trailer lets on — and in fact, there are already elements in the international trailer that look a little stranger than what the North American trailer gives us. (What’s with that close-up of the two fingers almost touching, for example?)

But, as one who listens to the soundtrack to The Fountain (2006) fairly often — it is composed by Clint Mansell, who has worked on all of Aronofsky’s films and has played a big part in defining their signature style — the question I have been asking is how the actual score for Noah will compare to the generic trailer music.

Well, no clips have been released yet or anything, but over the weekend Aronofsky did send out a few tweets to the effect that he and Mansell were working on the score and “fine tuning symphonic madness”. And that gives me hope, at least. (Along the way, he also tweeted the picture above — that’s Mansell on the left, Aronofsky on the right, and an image of Russell Crowe as Noah on a screen in the middle.)

As a footnote: It’s kind of funny that people might worry now that a film directed by Aronofsky and scored by Mansell will turn out to be just another big-studio tentpole, all on the basis of a trailer that was designed to be as conventional as possible.

Why is it funny? Because some of the ads for The Lord of the Rings: The Two Towers (2002) — one of the films that played a big part in driving Hollywood in its current effects-heavy direction — used a theme that Mansell had written for Aronofsky’s second (and stylistically quite daring) film Requiem for a Dream (2000).

There’s an irony in that, somewhere.

November 19, 2013
The Garden of Eden gets cameos in Noah and Son of God
Next Post

November 20, 2013 From fighting the Crusaders to advising the Pharaohs
Recent Comments
2 Comments | Leave a Comment
""AD" stands for "Anno Domini", a Latin expression meaning "In the Year of Our Lord".So ..."
Peter T Chattaway The Chosen — season one, episode ..."
"Why does it say at the start of episode 3 that it takes place 26 ..."
Desiree Chamberlain The Chosen — season one, episode ..."
"What about Hellboy, The Grudge, Ghoulies, and Anaconda?"
45th Spiderbob Group VGCP When R-rated franchises go PG-13 …
"Not yet, but I might do something like that once Season 2 is complete."
Peter T Chattaway The Chosen — season one scripture ..."
Browse Our Archives
get the latest from
FilmChat
Sign up for our newsletter
POPULAR AT PATHEOS Entertainment
1