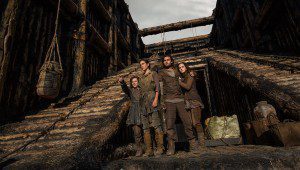 First things first: the soundtrack is out today. Buy it via iTunes or Amazon.

Now: Is Noah going to open in Egypt tomorrow? That still seems to be the plan, according to the studio’s website, but a few other predominantly Muslim countries have already banned the film, and the top Muslim authority in Egypt recommended banning it there, too, a few weeks ago, so if a decision hasn’t been made yet, it should be soon.

In any case, Indonesia — the most populous Muslim country of them all — has now joined the club and banned the film itself, partly because the visual depiction of a prophet is forbidden in some versions of Islam but also because the film doesn’t follow the version of Noah’s story that appears in the Koran.

The Hollywood Reporter has some background info on the state of Indonesian moviegoing (“just one movie screen for every 357,000 people, compared with one screen for every 25,000 residents in nearby Singapore”) and the possible role that an upcoming election might have played in the ban.

The Jakarta Globe reports that local filmmaker Joko Anwar is openly criticizing the country’s censorship board for its “narrow-minded” decision. “Nowadays, with the easy access to YouTube, banning a movie is a waste of effort,” he says. “Secondly, if we are talking about film, we should see it as a work of art. Art is an interpretation of the filmmaker, so it should not be banned.”

Time rounds up some of the reactions to the Indonesian ban that have surfaced on Twitter, including Islamic scholar Mohamad Guntur Romli’s claim that “A film that is based on a biblical story can’t be accused of violating, for example, Islamic doctrines.” Well, that depends on how loose the adaptation is, I’d argue — and besides, Islamic doctrines are ultimately based on the Koran, not the Bible, right?

One country that will get the film, apparently, is Lebanon, where the censorship bureau has approved the film, albeit with “reservations”.

Did you know that the young version of Noah’s son Ham is played in this film by the son of Craig Gross, pastor of XXXChurch.com? I did not, until I read this story. Interesting. (The young actor’s name is Nolan Gross.)

The Humane Society of the United States is supporting the film because Aronofsky decided not to use any real animals during the filmmaking.

I don’t follow football at all, but a few websites seemed to think it was worth noting yesterday that someone named Drew Brees attended a screening of Noah with his wife — in costume:

Finally, a couple of op-ed pieces.

My Patheos colleague Rebecca Cusey has a provocative list of “8 Reasons The Faithful Should Get Over Themselves And Give The Noah Movie A Chance” over at The Federalist.

And Brian Godawa, the novelist and screenwriter whose critique of an early draft of the script played a huge part in stirring up the “controversy” around this film, has another article at The Christian Post on “How To Watch the Movie with Wisdom and Discernment”.

Aronofsky and the actors were also in Los Angeles for a junket the last few days, but I’ll get to those interviews and things in another post.

March 25, 2014
Exclusive: Darren Aronofsky and Ari Handel on how they developed the script and where they really got the name for Emma Watson's character in Noah
Next Post

March 25, 2014 Like DeMille before him, Aronofsky tips his hat to Doré
Recent Comments
1 Comment | Leave a Comment
Browse Our Archives
get the latest from
FilmChat
Sign up for our newsletter
POPULAR AT PATHEOS Entertainment
1