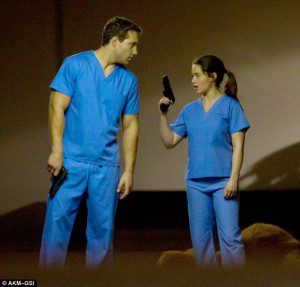 See that photo to the right?

It’s a picture — one of several published by the Daily Mail today — of Jai Courtenay playing Kyle Reese and Emilia Clarke playing Sarah Connor in the new Terminator movie. It is, in other words, a picture of John Connor’s parents.

And the first thing I find myself thinking is that either Courtenay is too big to be Kyle, or Clarke is too small to be Sarah. These characters weren’t this different in height in the original film, were they?

Well, if Google is to be believed, the Kyle actors are almost identical in height — Michael Biehn is 1.83m and Courtenay is 1.85m — while the Sarah actors are a bit more different, with Linda Hamilton’s 1.68m beating Clarke’s 1.57m. So a gap of 15cm in the original film has nearly doubled to become a gap of 28cm in the new film. (That’s a leap from about 6 inches to 11 inches, for those on the American system.)

Maybe it’s not their heights, though. Maybe there’s something else about the physical presence of these actors that just seems… different… from the original film.

Oh, and apparently the scene they’re shooting also involves Arnold Schwarzenegger — as an older, grey-haired Terminator — and Jason Clarke, as Kyle and Sarah’s son John. And note: John Connor is apparently wearing a business suit in this scene, rather than the military gear he wore when he was this age in the other movies. 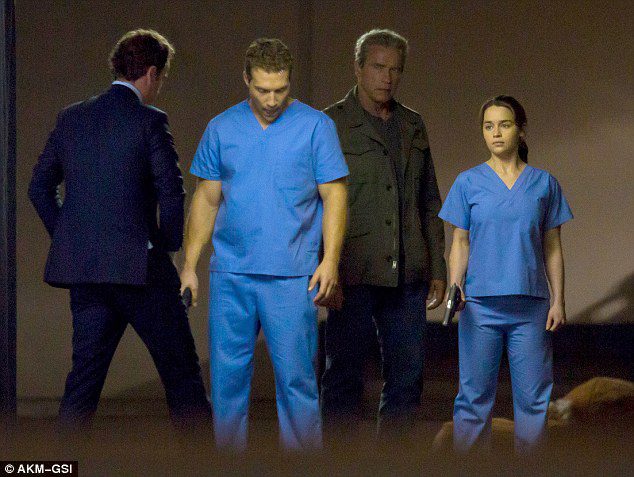 In case you’re wondering why John Connor is older than his parents in this scene, it presumably has something to do with the fact that Kyle and Sarah travel into the future — to the year 2017 — in this new film. As for why that happens… and as for why the future doesn’t seem to be all that post-apocalyptic any more… I have no idea. But it sounds like this new film is going to do for the Terminator franchise what X-Men: Days of Future Past just did for that franchise: use time travel to rewrite the franchise’s history so that we can all forget that certain sequels ever happened.

Speaking of time-travel-y things, it was announced a few weeks ago that Matt Smith, who played the titular Time Lord on Doctor Who until very recently, has joined the cast of this film as “a new character with a strong connection to John Connor”.

And speaking of casting, bodybuilder Aaron V. Williamson is going to play “a T-800” in this film — and many observers are placing great emphasis on the indefinite article there (he’s playing “a” T-800, not “the” T-800), because it implies that not all of the T-800 Terminator models in this film will look like Schwarzenegger.

But of course, they didn’t all look like him in the first film, either.

May 29, 2014
The Ascension of Christ in film: literalism, symbolism, etc.
Next Post

May 30, 2014 Chaos reigns in new Left Behind teaser trailer
Recent Comments
0 | Leave a Comment
Browse Our Archives
get the latest from
FilmChat
Sign up for our newsletter
POPULAR AT PATHEOS Entertainment
1